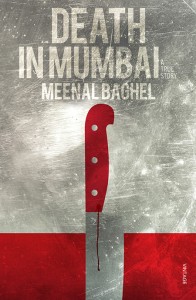 The story has everything – an apparent femme fatale in the shape of a Kannada starlet with cognac eyes, a TV executive with a roving eye and a steely naval cadet and violent death in a bedroom all set against the backdrop of Mumbai. In fact, if it weren’t a true story, it would have been the stuff blockbuster films are made of.

The tragedy of Maria Susairaj, Neeraj Grover and Emile Jerome hit the headlines in 2008 with its gruesome details – Neeraj hacked into pieces by Emile and Maria and his body buried in the jungles of Manor. Three young ambitious people with apparently bright futures in front of them brought together in a crime of passion. In her preface Baghel writes, “Here were three people blessed with many favours through their lives — they were young, educated, each talented in their own way, beautiful, and from comfortable middle class backgrounds. What dark undercurrents in their personalities drew them to one another?”

Despite all the evidence that the police collected, no one could really understand what had happened on the night of May 6, 2008 when Neeraj went missing from Maria’s flat and why the association between the three spun out of control. Maria was acquitted of murder but charged with being an accessory to murder and imprisoned for two years, while Emile was convicted of ‘culpable homicide not amounting to murder’.

Baghel starts her story with Neeraj going missing and then begins to probe into the lives of all three people involved by talking to their families, their friends and their colleagues. She also explores what it means to be young, ambitious and living in Mumbai. As a result, a lot of interesting people are introduced; like Ekta Kapoor of Balaji Telefilms for whom Neeraj worked briefly, whose lifestyle and home are described in minute and sometimes sardonic detail. She, along with Ram Gopal Verma represent the dream makers – they make or break people like Maria and Neeraj. Then there’s Moon Das, another victim of the glamour industry whose life also spun into tragedy and who was briefly contemplating playing the role of Maria Susairaj in a film.

All these people are set against tragic stories like Neeraj’s father Amarnath sticking up posters round his house in Mumbai in the hope that his son may reappear. Or the stationery shop in Kanpur that his parents hoped Neeraj would run. Baghel has researched her subject in depth from Mysore to Mumbai to Kanpur and back. We are told about Neeraj, “the lean and hungry hop-skip-jump man” and the manipulative Maria who, despite her sensuality seemed confused to Neeraj’s friends. Emile is not gone into in any depth because he was not forthcoming and Baghel had to find out about him through interviews. We learn at the end that he became a model prisoner.

The reader keeps expecting a description of the murder in all its gore but Baghel pauses at Neeraj’s disappearance to provide pen portraits of people, to sketch out details of Maria’s thought processes, even to introduce a tarot card reader. We have a list of the evidence the police found when Maria finally broke down under questioning and confessed. And then, finally, when the reader’s patience is being worn to a thread, Baghel tells us the rest of the story. Not all of it because she too does not have the answer to why it all happened beyond the fact that Emile responded to Neeraj’s jibe, “What kind of a fiancé is he when his girlfriend needs another man to be with her?” and flew down to Mumbai in a rage.

As to the rest, where was the knife, how exactly was it done – Baghel quite obviously prefers not to go into sensational details which would overload the story.

If you’re planning to purchase Meenal Baghel’s Death In Mumbai do consider buying it through this Women’s Web affiliate link at Flipkart. We get a small share of the proceeds – every little bit will help us continue bringing you the content you like!

Readers outside India can purchase Death In Mumbai through our affiliate link at Amazon.