Motherhood is idealised as “natural” and making a woman complete, but sometimes, a mother is born after the child. 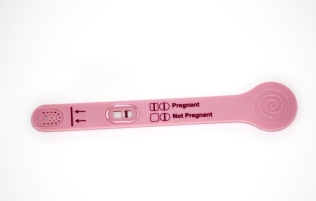 Motherhood is idealised as “natural” and making a woman complete, but sometimes, a mother is born after the child.

The thin blue line stretched past the tiny plastic window and changed my life forever.

None of my friends were married, leave alone having babies, yet. Can you imagine how it was, to be the first one to navigate through unchartered territory? No one that knows you well to say, “Don’t freak out; you will be alright. All you have to do is _______”.

I had gotten married four months earlier and my husband and I had just moved to a smallish flat in a corner of London, ready to take on the world. He had applied for his driving licence the week before and I was going to the library later on to browse the Internet (we didn’t have a computer at home) and get some information about doing my Masters at a local University.

I had just turned 23. I hadn’t finished growing up. I wasn’t done being a student. There was still so much I had planned to do before I was ready to become a mother. My Five Year Plan had “motherhood” at the fag end of it, after a Masters Degree, a job, any number of European vacations and a much longed-for holiday to the Lake District. I hadn’t even unpacked all of my things yet, London was just sitting tantalisingly out of reach, my dream of studying in England was yet to be realised and what the hell was I going to do with a baby?

Coping with my unplanned pregnancy

To give an inkling of how clueless I was, I hadn’t even registered with a GP, I did not know how to go about confirming the pregnancy and beyond that, the Good Lord alone knew what Step 3 was. We had no family or friends to speak of there yet who could take us under their wings and it wasn’t as if I could just pick up the phone and ask mum what to do next. She was in India, the land of all that was familiar, while my equally bewildered husband and I, we had to fend for ourselves.

It was a rude welcome to impending parenthood.

I’d be lying if I said I did not consider a less happy outcome for my pregnancy.

I’d be lying if I said I did not consider a less happy outcome for my pregnancy. The doctor gave us all the options at our disposal. Though I looked at the literature, my heart balked at the thought of what it meant. Words like ‘termination’ sounded so detached on paper but in reality, the process was what some of my nightmares were made of. In desperation, my husband even suggested we have the baby and leave it with our parents in India, for just a year or two, and then go back and claim it!

The next 8 months proved to be a crash course in marriage – where we had once hoped to take our time, we went on like we were on the clock. Have you always wanted children? What did you want to be, when you grew up? Did you..? Would you have…?

The struggle to learn about parenting

And once Baby arrived, it was as if a three-ringed circus came along with it. The bewildering number of things required, the total lack of sleep, the cries, the poop and oh-my-god the breast feeding! At what was the lowest point of motherhood for me, I distinctly remember screaming at the scrap of humanity one afternoon, after nightly colicky bawling totally shredded my nerves. I don’t think I even made words – just sounds, harsh guttural ones, came out of my mouth. I left Baby on the bed, surrounded by pillows, closed myself in the bathroom and let it all out.

Having the grandmothers, in many ways, made things worse. Overnight, I was expected to know everything about parenting – how to calm the baby down, to soothe, to feed, to be the Mother, yet stand back and hand the reins over when demanded. It was a queer sort of feeling, being asked, “Why is the baby crying now?” as if I was the world’s authority on all things baby and then half an hour later, told to eat such and such as it will help baby or to hold the towel and stand by the side, so the baby can be bathed properly.

I was never one of those natural mothers. Motherhood didn’t sit easy on me.

I was never one of those natural mothers. Motherhood didn’t sit easy on me. Even as my baby learnt slowly how to be a human being, I learned about parenting along with it. For a long time, I was too scared even to lift the baby up, worried that I might drop it. I had no opinions on what shook many other mums – cloth nappies, pureeing food by their own hands, BPA bottles, bottle-fed vs. breast. It was all I could do to hold my head above water and carry on.

The first time my toddler had a meltdown, I stood like a pillar of salt. I had no idea how to calm the child down, what to do next, which way was out. That night, I searched the Web for terrible twos and tantrums, printed out the article on how to deal with it and stuck it to my fridge. Every morning I used to read it and repeat it to myself, “hug the child; calm him down; soothe the baby by repeating the calming words again and again”.

Effects of an early & unplanned pregnancy on my marriage

Having a baby so early in my marriage had a huge effect on it. When other 25 year olds in one of the happening cities of the world were falling out of nightclubs, my husband and I were taking turns to walk our screaming toddler back to bed. Where people our age booked holidays to Ibiza and Aya Napa, we went on child-friendly day trips. Having never gone out for a meal just by ourselves, the first time we did was a complete and utter disaster! We stared at the plate of food in front of us and studiously ate every crumb.

Today, when I see friends and acquaintances getting married late and becoming parents much later, I cannot help but wonder what if.

Today, when I see friends and acquaintances getting married late and becoming parents much later, I cannot help but wonder what if. What if I my Life Plan had worked out the way I had planned? Would I have been a better mother to my child?

Without a question of a doubt.

I went on to do my degree, get a job and go on the holidays I wanted – just in a different way to my original Plan. But my child would always have the rough around the edges mum, one who fumbled a lot, especially in the beginning. One who is far from the soft and cuddly kind. One who is a tiny bit removed from the ideal mum.

*This author has requested use of a pseudonym given the sensitive nature of her story.