Many women entrepreneurs in India began by using traditionally female skills to run a home based business – and then grew. We learn from their stories.

What can a woman do if she decides to turn entrepreneur? She can cook, bake, stitch, embroider, design or teach – so go the “traditional” female skills that women usually turned into a livelihood, by starting a home based business. While they bring in much-needed income, a few women entrepreneurs in India have reinvented these so called ‘female skills’ into something unique and far-reaching than your neighbourhood boutique or catering business. Here we bring you some ‘women’s businesses’ with a difference.

She started off wanting to revive textiles and dying traditional weaves and embroideries, got into designing and never looked back. Ritu Kumar, the doyenne of fashion in India, draws on her training in art history and museology to redefine ancient textiles and weaves into contemporary fashion. “I started with two tables and four handblock printers,” she laughs, thinking back to the early days.

Today she has a brand that is renowned globally, has taken Indian candidates to Miss Universe and Miss World titles and a boutique chain that started the concept of boutiques here in India. The boutiques happened by chance. “I had the textiles and the garments, but couldn’t find an appropriate space to retail them, and knew that if I had to showcase them appropriately, I would need to get into the retail space on my own. There were no retail spaces which were focused on ethnic fashion,” she says. 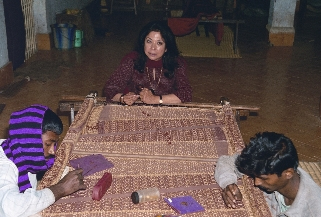 Her entry on to the world stage speeded up when she began designing the garments for the Miss India contestants who were sent to the international pageants. “I was a judge on the panel during the year Sushmita and Aishwarya won, and I took on the challenge of giving them a look that was inspired by our crafts and textile heritage,” she adds. The gowns, lehengas and resort wear she created for Aishwarya Rai and Sushmita Sen would go on to play an important part in their eventually winning the Miss World and Miss Universe titles.

Ritu Kumar believes that she first set out to raise awareness about India’s beautiful textile heritage, and not to create a fashion label. To her credit, she has done both and built a brand in the process.

Aditi Talreja: For the love of food

It was the love of food and eating out that got Aditi Talreja interested in the business of ordering food. She spent five years in New York and London, first studying for her graduation and then working with Morgan Stanley, where she saw firsthand how big the delivery business. The idea for what would become DeliveryChef took root when she moved back to India. She says, “When I moved back, here too I noticed that when people go home tired from work, they sometimes want to treat themselves with some tasty food. That’s how the idea of launching a web-based food ordering platform germinated.”

DeliveryChef was launched with the premise of letting people order food online for delivery from over 200 of Mumbai’s best restaurants, bakeries, mithai shops and more – free. “We Mumbaikars are slowly but surely moving towards doing as much online as we can – from booking airline tickets to movie tickets, so why not food? As a consumer, I’ve often wished for a similar service myself – when I didn’t know which places delivered to my house, or I couldn’t find their menu and felt like eating something different. That’s what made me start DeliveryChef.in,” says Aditi.

On the anvil is improving the existing platform and expanding their reach in terms of areas.

Kavita Mukhi is a name familiar to most Mumbaikars passionate about organic fruits and vegetables. Her tryst with organic food as a way of life started when she had her baby. She says, “I was working as a journalist when I got married and had a baby. In the first week of his life, my baby was given antibiotics and I was shocked and knew that this was not the right way. Luckily the right books fell into my hands, and I got interested in nutrition and decided to study it formally.”

She trained abroad in nutrition and returned to India to talk about eco-nutrition, organic farming and found that the toughest resistance came from within the family. “The interested people loved me, those who weren’t interested thought of me as a health food nut,” she says. Currently, her pet project in Mumbai is the Farmer’s Market, held on select days through the year where farmers directly retail organic produce to consumers; the atmosphere is almost carnival like with stalls selling organic foods and vegetables.

It still has a long way to go, says Kavita. “Compared with the population in Mumbai it is still miniscule, but those who make it to the market love it. We had been feeling the need for it since years, since all other organic foods were available but for the perishable group. I realized that farmers put up with a lot and we don’t honour their work enough. This is simply a bid to protect their wisdom and hope that it will be passed on to their children. Organic foods take care of the farmer, the land, our health and ensure that GM foods do not make their way onto our plates.”

On the cards is popularizing the Farmer’s Market, for which she needs to take it to various locations in Mumbai and make it more organized without losing the Bohemian quality that adds to its appeal. And of course, converting more people to the organic way of life!

Varsha Bhawnani’s career began ‘normally’ enough – with a management degree from the Indian School of Business and a short stint at an equity firm before branching out into where her passion was – fashion retail. She set up Vinegar, a store that consults with a client on their complete wardrobe and look rather than just selling individual items. She says, “I decided to channel my entrepreneurial skills and experience into taking a risk and bringing a new concept into India and I’m very grateful for the acceptance I’ve received from the female Indian consumer audience.”

Vinegar was started a couple of years ago, on the belief that there was a dearth of affordable fashion in India. She says, “It’s luxury in its most reasonable form. I have style consultations where my clients work with the designers and stylists to develop their own personal style. We have a Wardrobe Makeover, where we work on the styles, cuts and colours which would work for the client and give them a complete set of new customised garments.”

Encouraged by the response, she is now taking Vinegar into a much bigger space, and looking to expand Vinegar as a Pan India store.

Traditional female skills are no longer a must for every young woman to learn, but sometimes, an interest in these can lead to unexpected results!