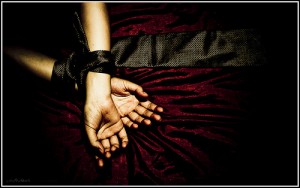 “I wish I had fallen for a Brahmin“, she said with all sincerity, shaking her head in my direction. I murmured words of understanding and shook my head back. My moral compass was shaking too.

Meet my friend Parvati*. We grew up together in Britain in the late 80s and early 90s, and we were not what people thought of as ‘standard’ Asian girls at the time. We wore our hair short, had scabbed knees from constantly running and falling over, and we expected more from life than marrying men chosen by our parents. We did not always see eye to eye on everything, but as is often the way with life-long friends, we could both see where the other had come from.

Parvati and I were the first females in our families to go to university. Parvati completed a degree in teaching, and I had a thirst for travel and visited various corners of the world. It was an exciting time for second generation Asians, and the question on our lips was – what did fate have in store for hardworking, independent Asian women?

Parvati often spoke excitedly about how Asian women today were “free to do as they please; wear English clothes, short dresses and skirts, go clubbing and drinking.” She would give examples of how free Asian women were now compared to back then. “They are teachers, writers, lawyers, anything they want to be,” she’d say. While I agree that we have come a long way, I can’t share her enthusiasm.

This is because Parvati had been secretly dating the same man for over four years. This independent and educated female was terrified of the consequences if her parents discovered that she was in a relationship with a low caste Hindu, because in Parvati’s high-caste Brahmin family it is forbidden for women to marry into lower caste families. Here Parvati lost my understanding. How could she allow what is essentially a form of racism concealed by religion to continue through her own choices?

I didn’t feel able to ask Parvati this question aloud, but I did ask why she didn’t just marry her partner. “They might have him murdered“, she whispered to me one evening over a bottle of wine, shaking and tearful. “The extended family would laugh at us and disown us, and they’d never forgive me for dirtying their honour. I don’t know what they might do in response to that.”

A rare anecdote, you might say; an unlikely story? But this is the story of Asian women around the world. Whether they are living in India, Europe or the US, whether they are artists, lawyers or doctors, scratch the surface and the thick residue of an old inequality still remains. With their modern dresses these women wear a set of rusty, confining shackles.

Another friend of mine, Chandra, who spent three years secretly living with her Sikh partner while studying for her degree, confided in me after rejecting a marriage proposal from the love of her life. Her family are Jat, the wealthy, upper class caste in Sikh culture, so Chandra knew that marrying a man of a lower caste would be an unforgivable act. Chandra’s partner left her, and convinced that she would never find love again, Chandra had an arranged marriage to a Jat friend of the family. She became bitter and reckless, and was never quite the same again.

Parvati on the other hand, a stubborn woman who was used to having her way, would not give in. She confided in her mother, who, terrified of what her husband would do if he found out, begged her to stop seeing the low caste Hindu. She pleaded with her and scolded her. Bullied her and self-flagellated before her. But eventually, and for the sake of saving her family’s honour, Parvati’s mother gave in. She interrogated the imposter from the ‘lower classes’, who could not tell her anything about his own caste background because his parents had deliberately not taught him about it. This is typical of immigrant lower castes, wanting to leave behind the inequality of caste culture when they left their country of birth. They left for better things, after all.

Parvati’s mother conceded to a marriage based on strict rules. One – the lower caste boy must learn everything about the Brahmin way of life and take on the identity of a Brahmin; change his name, create a fake family history, and take part in a Brahmin wedding ceremony. Two, there must be no celebration for the lower caste family, because that would be like laughing in the faces of the Brahmin family who didn’t know the truth. Three, no one must ever, ever know the truth.

Parvati’s boyfriend consented because he recognised shackles that were bendable but, above all, held fast by decades of prejudice and snobbery. Meanwhile Parvati worried there would be karmic repercussions for defying every rule in the Indian woman’s guidebook, but she carried her burdens with her head held high, continuing to work, make wedding preparations, and smile like a good Asian bride-to-be. None of her non-Asian friends suspected a thing.

The lower caste family did hold a secret, unpermitted celebration of their own. The groom’s parents sat quiet and no one mentioned the fact that only the groom’s side of the family attended, or that the bride was missing. No one spoke about the injustice, or showed anger, or defended their apparently lowly selves from the sickness that is caste. The Asian lower castes are a humble lot – and used to putting up with their lot too.

One of my Asian friends was angry about it. “If this happened in India“, he said, “they’d all be put in jail.” India officially recognises caste discrimination and has laws prohibiting it, but Asian people living abroad continue to vehemently deny that caste is a form of racism. There are no laws specifically banning caste discrimination in western countries, partly because it happens in secret and partly because it is practiced by law abiding citizens; the families I have mentioned are in no way fundamentalists, but proud British-Asians, who have integrated into western culture well. Yet while their religions teach tolerance, they suffer from a mental sickness that gives them power, status, and control over others.

And there’s no hiding from that. To avoid giving your caste when asked denotes that you are a lower caste, and younger generations cannot escape the shackles because Asian names can be indicative of the family’s caste – so those who cling to caste inequalities enforce them on their children in this way.

I listen to my British Asian friends chatter about how women are free to choose careers and fewer children, or no children at all. How modern Asian men share the housework duties, change nappies. But my question is – Are we really free to marry who we please? Sadly, the answer is no. I fear we are a very long way away from that.

*Names have been changed for protective purposes.

About The Author: Zion Lights is a writer and mother interested in feminism, ethics, and green living. She is a regular contributor at One Green Planet and a columnist at The Vegan Woman. She lives in the West Midlands in the UK.

Project Why: With Anouradha Bakshi