Many actresses in Bollywood movies today are women at work who have careers - just because they 'want to.' 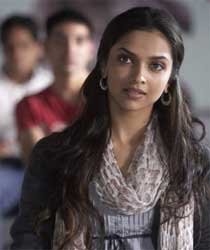 Many actresses in Bollywood movies today are women at work who have careers – just because they ‘want to.’

In a country where “homely” is the ultimate womanly virtue, it’s only to be expected that its most popular cinema would prefer its heroines be, in a most lady-like manner, unemployed. Over the years, Bollywood movies have slowly built up to the position that work is something women do when they have no other option (grinding poverty is a favorite cause) unless they’re “man-hating feminists”. This might serve to explain why prostitution is such a common profession in the movies, emphasizing the ‘degrading’ nature of the working experience.

The concept of work as something a woman might want to do without it affecting her femininity took time and the involvement of women directors. In Chashme Buddoor, Sai Paranjpe chose to use Deepti Naval’s short-lived career as the Chamko washing powder salesgirl as a plot point and never felt the need to explain it. Similarly, in Farah Khan’s Main Hoon Na, Sushmita Sen is a sexy beauty in traditional Indian wear who’s incidentally a Chemistry professor.

Male directors had a different take on it. You have someone like Gulzar who writes thought-provoking “women-oriented” cinema – except, most of his female characters live their powerful internal dramas as bored housewives. When they do buck this trend, as in the case of Aandhi and Ijaazat, for example, the “modern” woman is so incredibly selfish and/or annoying, your sympathies automatically go out to the male. Yet Gulzar’s is considered a progressive voice because, as Pooja Bhatt once informed the New York Times, most Bollywood directors prefer “women dressed as cakes.”

She might be speaking of the directors who made all those movies in the 1980s about avenging angels. You know – those one million rape dramas starring Dimple Kapadia, Rekha and various South Indian actresses? For a while, it seemed the only way a working woman could get the go-ahead from Bollywood was if she could manage to get herself gangraped or fed to the crocodiles by horrible men, prompting her to get a job in law enforcement or find her calling in vigilante-ism.

In between all this supposedly empowering violence, however, was Sridevi – a tall goddess with a squeaky voice who managed to play a working woman in some of her most popular roles. In Chandni, when her lover breaks her heart, she doesn’t sit at home and cry into her pillow. She gets a job at Vinod Khanna’s office. In Mr. India, she’s a dedicated reporter snooping in dangerous territory. It took rigidly chauvinistic South-inspired (or, more accurately, K. Raghavendra Rao-inspired) storylines in movies such as Laadla and Himmatwala to turn her innate spunk into something nasty.

Cut to the 90s. The two great female icons of this era were Madhuri Dixit in Hum Aapke Hain Kaun and Kajol in Dilwale Dulhaniya Le Jayenge. They portrayed well-educated women from upper middle class families who do absolutely nothing. At least in the old days, women would have little hobbies like painting or dancing or reading books or something. Not here.

All of which was increasingly out of touch with Indian reality. As Bollywood continued to employ women to act as though they’d never worked a day in their lives, the Indian woman was stepping into the workforce with growing confidence. As we slipped into the 21st century, more than a couple of generations of Indians had grown up with the daily example of working mothers. Everyone from Shahrukh Khan to your kid’s best friend has a mother or other female family member who’s a proud career woman. It took time, but this “new” Indian reality has slowly begun to penetrate Bollywood as well.

Deepika Padukone, for example, is four films old: she has been a strong career woman with varying degrees of agency in all of them. In fact, she even chose her career over the boy in two of them without being demonized. It didn’t last, obviously, but at least she managed to portray a working woman with options. And she’s not the only one – Priyanka Chopra being the other famous example. In the past two years alone, she has appeared in eight films, playing everything from a pop star to a kindergarten teacher to a bodyguard.

Of course, new challenges present themselves every day: Kareena Kapoor’s supermodel-by-night / surgeon-by-day character in Kambakkt Ishq, to quote just one example, was hardly the culmination of the Indian feminist dream. Progress, in Bollywood as elsewhere, comes one small step at a time.