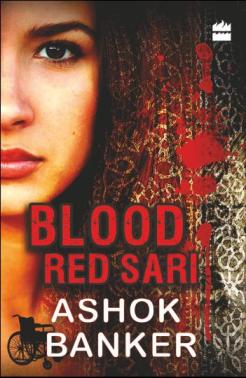 A feminine cast, the Kolkata Kali and copious amounts of violence; Ashok Banker returns to murder mysteries with his Blood Red Sari.

Pulse pounding, says the blurb on the back and pulse pounding it certainly is. Ashok Banker is back in high voltage thriller territory after his learned voyages into mythology – well, that may be an extreme comment to make, but Banker began his writing career with murder mysteries and Blood Red Sari certainly has a lot of murders.

Beginning with the death of Lalima in Dubai which leads to the mailing of three thick yellow envelopes to three different women, which in turn leads to the unleashing of murder and mayhem. The women come from very different backgrounds and different states of physical fitness. One is a Malayali Private Investigator, one a gym owner in Kolkata and one an attorney in Delhi who is wheelchair bound through the abuse of her in-laws.

All three are involved in situations of such violence that in a climate of India post-Nirbhaya, it sets the teeth on edge – rapes, villains being munched by hippos and all. Compared to that, Government corruption, when encountered, seems remarkably mild. The women’s lives before the story begins are roughly sketched in – perhaps Anita’s is the most vivid, though her existence as an investigator hardly seems to figure in the violence that her Christian family perpetrates on a gay woman.

LGBT undercurrents seem to creep up in Sheila, the gym owner’s and Anita’s life, not to mention Lalima, who sets the whole thing in motion; Though Sheila has a torrid affair with a handsome Kolkata Chinese man who controls triads all over the Far East and haunts a tower called Burj in Salt Lake, aka Bidhannagar.

The first chapter set in Kalighat brings in the blood red sari which is apparently the only colour that can be gifted to the goddess Kali. Banker must have given in to temptation for dramatic purposes, because the fact is unfortunately far from the truth. Also, the first chapter introduces a mysterious ‘I’ who makes a set of offerings to Kali for vengeance, including ‘lip colour’ which does duty for the more conventional sindoor offering, and sets the rest of the story in train.

Despite the feminine cast, the violence feels more likely to appeal to men. It will probably have people compulsively flipping through it in trains and planes, filling in the gaps in time and wondering what next. Whether they will approve of the ending or not is yet to be decided. Some may find it too gimmicky for words.

Banker makes a fine art of leading the reader on and leaving him or her confronted with a cliffhanger. It is very obvious that the fabric of the Blood Red Sari will be unravelled in a series of books to come, each with very colourful names in the style of the late John D Macdonald’s Travis McGee books. If you don’t have a taste for violence, be warned again, Blood Red Sari is violent with a capital ‘V’. The Communist Party of India (Marxist), acronym CPI (M) may also object to being turned into the Communist Party of India (Maoist). Presumably both editor and author decided that in West Bengal, anything goes.

If you’re planning to purchase Blood Red Sari do consider buying it through this Women’s Web affiliate link at Flipkart. We get a small share of the proceeds – every little bit will help us continue bringing you the content you like!

Readers outside India can purchase Blood Red Sari through our affiliate link at Amazon.