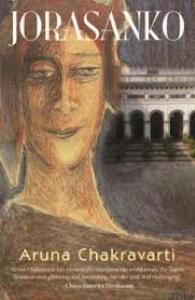 This was a book written for Rabindranath Tagore’s 150th birth anniversary and it goes where no novel has gone before. Aruna Chakravarti took up the task of telling the tale of the women in the Tagore household of Jorasanko, adding her imagination to the documents that existed of the life and times of the Tagores.

As is known to most Bengalis, the house at Jorasanko was famed for its culture and intellectual daring. The women of the household, Rabindranath’s sisters wrote plays, while the wives brought a breath of fresh air into the way women lived at the time. However this free thinking was set against a background dominated by a patriarchal culture, child marriage and domineering mothers–in-law.

Chakravarti begins with the formidable Digambari who banished Rabindranath’s grandfather, the merchant prince Dwarkanath, from her bed and prayer room because he insisted on fraternizing with foreigners and breaking Hindu principles. She goes on to the dazzlingly fair Sarada Sundari, wife of Debendranath Tagore, who gave birth to 14 children, Rabindranath among them and who sexually obsessed her husband without subscribing to his philosophies. And then comes Genu, Jnanadanandini, who changed the way women wore the sari forever, at the cost of alienating the older generation. And of course, Tagore’s muse, Kadambari and his wife Mrinalini.

The saga unravels like a soap opera with the requisite grief and heart break. For the most part it is a clash of old against new with gorgeous saris and jewellery in imagined colours – Kadambari for example, visualized in a rose pink satin crepe with a jacket the colour of clotted blood. And of course there are the politics that plague big houses – a bride’s wedding jewellery is taken away and given to another because her father failed to provide adequate dowry; bride is set against bride, brother against brother, insanity is ignored with shattering effect.

Possibly because of the vast cast, Chakravarti confines herself to the main branch of the Tagore family, Debendranath and his children and defines the women’s lives in the context of their husbands. One could have asked for a better rounding out of many of the characters. Kadambari remains mysterious and the description of her relationship with Rabindranath asks to be fleshed out, something which could have been done since the book in question is a novel rather than a non-fiction work. Perhaps that particular episode deserves a book to itself.

The character of Prafullamoyi, wife of Tagore’s mentally challenged brother, is sketchy, so is that of Bibi, Tagore’s sister-in-law’s daughter. Tagore’s life leading up to Mrinalini’s death is seen only in the context of the house and the building of the school at Santiniketan, for which Mrinalini sacrificed her jewellery. The subject is so vast that it really asks for more depth.

The book may also require a glossary for terms like ‘jobba’, ‘ghumta’ and ‘khamta naach’ which may prove a disconnect for readers unfamiliar with the background and terminology.

For most Indian readers the book provides a valuable glimpse into the life and times of India’s first Nobel Prize winner. It will provide them with insights into the contribution of the Tagore women: for example tea drinking was made fashionable because the younger generation at Jorasanko took it up; women began making an appearance in public spheres because of Jnanadanandini. The legacy remains.

If you’re planning to purchase Aruna Chakravarti’s Jorasanko do consider buying it through this Women’s Web affiliate link at Flipkart. We get a small share of the proceeds – every little bit will help us continue bringing you the content you like!

More Than A School Teacher