Amruta Patil’s Adi Parva is a feminist retelling of the Mahabharat, with an interesting focus on its women characters. 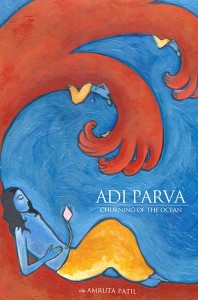 Amruta Patil’s Adi Parva is a feminist retelling of the Mahabharat, with an interesting focus on its women characters.

Adi Parva is the story of the Mahabharat as it stretches into infinity before the birth of the Pandavas. With stories nested within stories and told in the format of a graphic novel, the book begins with blood red panels. Red with the blood spilt on the land of Kurukshetra, in a war of titanic proportions. A sole vulture zooms in on specks of white: people looking for any sign of life among the dead.

The story is told by a woman sutradhaar (the narrator) – not just any woman – the river Ganga herself in human form, a mute witness to all of history. No longer mute, though, as she tells the tale to those gathered, wanting to know more.

This sets an unusual, feminist tone to the narrative. Vyas’s Mahabharat has Sauti, the sutradhaar, narrating the history of his forefathers to Janmejaya, ruler of Hastinapur and Arjun’s great-grandson. It is a narrative in which the women are often overshadowed by the string of glorious achievements of the male characters. That is how history has always been recorded.

Like Irawati Karve’s Yuganta, Chaturvedi Badrinath’s Women Of The Mahabharata and Chitra Banerjee Divakaruni’s The Palace of Illusions, Amruta Patil’s Adi Parva brings to the forefront the women of the Mahabharat, giving them a human dimension that often gets concealed. The writer gets under the skin of these women and tells it like it must have been through their eyes, their emotions, hopes and wishes.

We feel the pain of lost dreams with the beauteous Gandhari when she is tricked into marrying a blind king. The fear and helplessness of a young and naïve Kunti who feels she has no choice but to discard her newborn rather than face the ostracization doled out to unwed mothers by society. The horror of the unwanted sexual relations forced on Ambika and Ambalika who are reduced to no more than wombs which carry the heir to the throne. The rejection felt by Amba when she is spurned both by her intended Shalva, and later Bheeshma, when she turns to him, since his hasty actions were the reason she lost the life she had dreamed of.

Amruta Patil also brings forth the strength of her women characters, forging their own way in a social landscape that is obviously patriarchal. The forthrightness of Shakuntala in the way she speaks to her husband Dushyant about the truth and the rights of her son. The steadfastness of Kunti in her support of her husband, despite the rejection she suffers. Amba, who speaks up for her rights, literally fighting to avenge the insult to her womanhood. And of course, there is Ganga, not just the sutradhaar of this book, but also a player of calculated unpredictability and passion.

The author’s voice comes across strong and clear, both in the picture panels in bold, primary colours, interspersed with black-and-white charcoal sketches (where we return to the storytelling by Ganga) and in the crisp turn of phrase. There is also the commentary made on the actual story, thinly disguised as the narrative.

A woman listener– “Is my reasoning maudlin, or did Jaratkaru’s get a rotten deal from the men in her life? How about a sub-plot in which women aren’t just pots in which semen is deposited?”

The Mahabharat is an immense narrative; each re-telling and each reader finds different perspectives. There are layers in the narrative, revealing fresh insights. As Ganga says at the end :“And therein lies the safety device that protects the tale. I could lay bare every secret of the multiverse, but you will only hear what you’re ready to understand. You may sit atop gold like a clueless, territorial dragon, but what you do not understand can never be your own.

Amruta Patil is a writer to watch. The very title of her book Adi Parva promises sequels, as there is the hope that she tackles each parva (section) of the Mahabharat with equal panache; as does the passing on of the baton of the narrative by Ganga to the wounded Ashwatthama at the end.

If you’re planning to purchase Amruta Patil’s Adi Parva do consider buying it through this Women’s Web affiliate link at Flipkart. We get a small share of the proceeds – every little bit will help us continue bringing you the content you like!

Readers outside India can purchase Adi Parva through our affiliate link at Amazon.