A Life In Words, the memoirs of Ismat Chughtai, reveals a fiercely independent writer who became one of the finest Indian minds of the twentieth century. 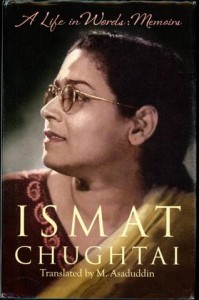 A Life In Words, the memoirs of Ismat Chughtai, reveals a fiercely independent writer who became one of the finest Indian minds of the twentieth century.

“She was not a feminist in a narrow or reductive sense, her concerns being much wider and more inclusive than merely the world of women. Her works cannot be reduced to mere allegories of gender oppression,” writes M.Asaduddin in the introduction to his translation of A Life In Words, the memoirs of Ismat Chughtai. I am not sure what Ismat would have made of a statement that speaks so dismissively of feminism (‘merely the world of women’? Seriously?) even as it praises her writing for being ‘wider and more inclusive’. Fortunately for us, Asaduddin’s translation is much more nuanced than his introduction.

The essays brought together in this collection were originally published as Kaghazi Hai Pairahan, appearing in the Urdu journal Aaj Kal in 1979 and 1980.

Like the rest of her writing, Ismat’s memoir is witty, honest, richly detailed, and filled with a rare empathy and generosity of spirit. The first chapter, about becoming a writer, opens with a vivid memory of herself, as a child “weeping inconsolably”, because “someone was being beaten brutally.” It was this that brought her to her first realisation about the world in which she was growing up: “The big beat the small, the strong batter the weak.” But almost simultaneously, she is aware of a subversive thought “in the deep recesses of my mind…whenever I saw a magnificent palace eaten away by moss sprouting on its walls and grass growing over it pitilessly, in the heart of my hearts I would smile secretly.” This fierce awareness, not only of the different masks of oppression but also of its inevitable decline, pervades her writing.

Her short story ‘Lihaaf ‘(1942), and the controversy about its alleged obscenity, was a milestone in Ismat’s life. The essay ‘In the Name of Those Married Women…’ opens with the summons from the Lahore court, on the charge of obscenity, that will change her life irrevocably. The summons arrives just as Ismat is preparing the bottle for her two-month old infant’s feed: “I had wanted the inspector to hold the feeding bottle so that I could sign, but he retreated with shock as though I had held a gun at him.”

Much happens during the court case, and Ismat is blunt about it. About the Progressives: they “neither appreciated not found fault with me. This suited me well.” About her husband’s reaction: “Shahid and I had so many fights over the story that life became a battlefield.” About the impact of ‘Lihaaf’ on the rest of her work: “It became the proverbial stick to beat me with and whatever I wrote afterwards got crushed under its weight.” One of the most memorable moments in the memoir is her meeting with the begum who was the subject of ‘Lihaaf’. Winning the case in Lahore does not give Ismat the sense of closure that this meeting does. “And I realised at that moment,” writes Ismat, “that flowers can be made to bloom among rocks. The only condition is that one has to water the plant with one’s heart’s blood.”

Ismat’s feminism is an integral part of her life. Throughout her memoirs, she never fails to write about other women, young and old, who find their own practical solutions to the problem of living in an unfair world. Mangu, the coachman’s daughter, who became possessed by spirits when her mother-in-law threatened to get her son married a second time: “These were very dangerous and vile spirits who, after entering Mangu’s body, inflamed her to give her mother-in-law a thrashing.”

Ismat’s mother tells her daughter that “to make a place for herself in the world a woman has to resort to feminine wiles…make a boy so dependent on you that he feels embarrassed to sew his own button and would die of shame if he has to prepare his own meal.” But Ismat is incorrigible. On the way to her brother’s wedding, she manages to “lose” the cap of her burqa. Showered with blows when the others suspect her of having lost it intentionally, Ismat writes that she accepted the blows “as though they were sweet laddoos.”

Later Ismat describes a conversation with Ala Bi, the founder of a girls’ school in Aligarh, who tells her students how she solved the work-family balance: “Mothers hardly rear children in our families. The first child is for dadi, the second for nani, then comes the turns of khala and phupi…That leaves cooking, which is done by the cook.”

Richly detailed as her character sketches are, Ismat’s observations on life are blunt, presented without frills or equivocation. On motherhood: “We were so many siblings that my mother felt nauseated by the very sight of us.”On childhood: “I got past childhood somehow. I never understood why people sing such paeans to childhood. Childhood exemplifies restrictions and deprivation.” On religion: “Faith is one thing, the culture of one’s country is another. I have an equal share in it, in its earth, sunshine and water.”

Even where she finds it painful to write about something, Ismat finds a way to express the ache. “I cannot keep my pen steady as I write these words today,” she says in an essay titled ‘Hell’, describing the time her father took a second wife – a betrayal that caused him as much pain as it did to Ismat’s mother. “Amma lay still. It was as though she had stopped breathing, as though she was afraid of moving from her position lest she break to pieces which would be difficult to put together again.”

Finally, Ismat writes about the power of stories, her ‘udankhatola’: “Just as no one can slap you if you say something over the telephone, you can say whatever you want through your stories, and no hand can reach for your throat.”

If you’re planning to purchase Ismat Chugtai’s memoir, A Life In Words, do consider buying it through this Women’s Web affiliate link at Flipkart. We get a small share of the proceeds – every little bit will help us continue bringing you the content you like