While every character, every actor is so fabulous, and this truly is the genius of Manjule, his ability to spot the diamond in the rough, Ankush is special. His eyes speak volumes in the absence of dialogue.

Jhund is my first film in a theatre after the pandemic. It felt so appropriate to watch it with an audience that clearly know its politics, there was clapping, cheering and hooting at the appropriate moments, and one felt that one was a part of a jhund (mob or collective, depending on the way you look at it).

The collective can be destructive when trapped in claustrophobic confines and joyous when they manage to crawl over those confines and dismantle them. This is the story of a mob that becomes a collective.

There are so many amazing things about Jhund

The film sparkles and crackles with life. The slum colony on the other side of the tracks is filled with light and colour and the hope of a better future. Every character has their place in the mosaic, every one of them contributing to a greater whole in their own unique way. They are not to be pitied or saved to make us feel good. They do well enough on their own if only we got out of their way.

The hardships aren’t glossed over, none of the characters have it easy, but it’s not because they live in a slum or are poor, it’s because people like us, me, don’t want them to leave.

I love that the maker of this film, Nagraj Manjule (of Sairaat fame) includes women in a sport that is primarily a male bastion and I love that no explanation is given for it. That’s how it is in the world of his making, men and women play football together, because they are good at it.

Ankush Gedam. While every character, every actor is so fabulous and this truly is the genius of Manjule, his ability to spot the diamond in the rough, Ankush is special. His eyes speak volumes in the absence of dialogue. The last wrenching scene in the film, as he’s caught at the security check, having forgotten to leave a hard part of his past behind, you weep at his anguish, will he ever be allowed to leave the slum? I hope Gedam grows and goes places and becomes the star that he deserves to be.

The only negative, what on earth was AB doing wearing foundation 10 shades lighter than his natural colour, looking uncomfortable and clueless? He was the only character who didn’t fit the ecosystem of the film. Neither Manjule nor AB knew what his role really was. I wonder if the casting of a ‘star’ was the call of the producers to help with the ticket sales or make it more palatable to the Bollywood audience. AB will be known for being a part of a historical film, that places Dalit poltics front and centre, but he unfortunately only serves to drag it down like a heavy anchor.

Do watch. Because despite the flaws, its a film you come away from feeling filled with hope and joy. 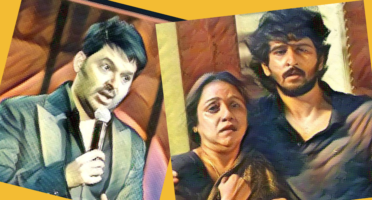