Saumya Roy’s Mountain Tales brings us the dark truth behind Mumbai's Deonar dumping grounds, and the waste pickers community whose survival is dependent on the sheer volume of garbage that maximum city discards every day.

Saumya Roy’s Mountain Tales brings us the dark truth behind Mumbai’s Deonar dumping grounds, and the waste pickers community whose survival is dependent on the sheer volume of garbage that maximum city discards every day.

Around 7AM every morning, the doorbell rings followed by a faint sound of the word “kacchada!” I pick up the garbage bags, hand them over to the collection staff, and the garbage disappears forever.

Honestly, this runs like clockwork across most residential societies in Mumbai. Even during the nationwide lockdown, newspapers did not make it to the doorstep, but garbage bags left quite regularly.

From the outside, the Waste Management system seems to run like well-oiled machinery. As long as waste is picked up, the cycle of buy, use, discard, and forget continues endlessly. Once the transaction of handing over the garbage bag is complete, nobody spends a moment to think of the impact of their actions. Meanwhile, what gets thrown as garbage has grown into 18-storey high mountains in the marshland of Deonar, which puts the entire city under perennial risk.

Enter Saumya Roy’s book Mountain Tales, with a teenage protagonist Farzana who makes a living off these mountains of garbage.

Beneath the layers of garbage accumulated over a century, lies the real picture of the city’s waste management. A murkier one ridden with government negligence, development deadlocks, poverty and sadly environmental impact.

Loss of childhood in search of castaways

At the beginning, the author sends a shiver down the spine when the protagonist discovers a glass jar with discarded foetuses in Deonar’s garbage mountain. Through the story, the character returns to pick medical waste, saline bags, bloodied cotton swabs amidst disembodied limbs and gangrenous fingers in an attempt to earn a livelihood.

First, I am haunted by the gross negligence in the disposal of human remains. Despite the presence of several civil bodies, regulators and medical establishments, being humane has taken a backseat.

Secondly, the realization that the protagonist is Farzana, a teenage girl who ends up giving a proper burial to the foetuses hits hard. She does not realize the hazardous nature of her work, but is left disturbed by the sight and smells. Though she swears not to return, she is forced to in an attempt to save the roof over her family’s head. There is no childhood for children raised in places like Deonar!

Like Farzana, a whole community thrives by hoarding discarded treasures of the city.

Their survival is ridden with tuberculosis deaths, unemployment, lack of civil amenities, hunger, poverty and at times children disappearing without trace. When the garbage mountains were up in flames in 2016, the Air Quality index touched 341 (acceptable limit is 200) putting the entire city in a state of panic. Yet they were still picking garbage in the epicentre like a regular day!

Their existence is hardly acknowledged by civil authorities who are busy sparring internally to resolve the mountain menace. In reality, this is an invisible community which is totally justified getting into panic mode when the Government announces the Citizenship Amendment act.

The fragile state of existence of this community is a testament to the collective failure of the society and government in the arena of waste disposal.

Yet we continue buying, hoarding, and discarding in a cycle of materialistic addiction

A few chapters in, I felt intense guilt over my possibly miniscule contribution to the towering garbage mountains despite living in Mumbai for just 7 years. A strong urge to break free of this incessant cycle of accumulating possessions, shopping without a second thought and discarding them mindlessly. 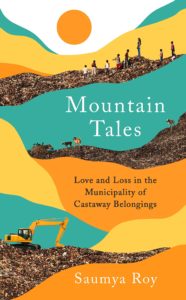 When something we own breaks, an attitude of indifference seeps in. It reflects in how we treat it or dispose of it. But how often do we sit down to see if it can be fixed, reused, recycled, or ask ourselves if it even need to be replaced?

Over the years, I have seen waste segregation being instituted, a ban on plastic bags, eco-friendly ganpatis and DIY videos for recycling. While these initiatives may save the environment for the future, I wonder if we can ever offset the damage done to Deonar marshlands. If we add its dangerous proximity to the sea, to the infamous Mumbai monsoons, and the annual tradition of flooding, let me say that during the rains we are floating in the filth we religiously send out every morning.

The Deonar dumping grounds were set up in the wake of the bubonic plague by British officials.

Sadly, a century has passed since and neither the government nor the civic bodies, courts have managed to resolve Deonar’s fate. With no foreseeable practical solution on the horizon, the garbage mountains are here to stay. But if we break free from mindless buying and discarding, we may stand a chance at not raising new ones in our time.

If you would like to pick up a copy of Mountain Tales: Love and Loss in the Municipality of Castaway Belongings by Saumya Roy, use our affiliate links at Amazon India, and at Amazon US.