How Does A Single Woman Hitting Her 40s Fare In The Urban Jungle Of Romantic Relationships?

Even as the numbers of single women increase in urban India, the scales have always been tipped in the favour of men, leaving an educated, opinionated, thinking woman, scratching her head at all the stereotypes that she meets.

Even as the numbers of single women increase in urban India, the scales have always been tipped in the favour of men, leaving an educated, opinionated, thinking woman, scratching her head at all the stereotypes that she meets.

I came across Ritu Bhatia’s book Manspotting while searching for memoirs written by Indian women. I was captivated by the premise of the book, which tackles a completely underserved area of contemporary life. I connected with Ritu over Twitter and we kept in touch over time. I also had the pleasure of interviewing Ritu for my blog on my favorite topic.

When Delhi-based writer and journalist Ritu Bhatia turned single in middle age and set forth to discover a new life and romantic relationship, she had no idea of what she was up against. All the books she could find were for the twenty and thirty-somethings, not women of her generation, which led her to chronicle her own experiences.

Optimistic about finding true love, she discovers the city has all kinds of men looking to mingle, there’s the debonair single dad, who wants her to play stepmom, a middle-aged singleton who can’t be parted from his Mommy, a dashing Mr India who turns into Mr. Sleazy when she enters his apartment, and a smooth-talking salsa dancer who sweeps her off her feet. Keeping pace with a younger man, she finds, needs vast reserves of energy and a generous budget for gyms and beauty treatments, bringing her attempts to turn into a ‘desi cougar’ to nought.

Told with engaging wit and candour, Manspotting looks at the metamorphosis of love, sex and relationships over two decades, in a culture beset with contradictions and judgements about women’s interactions with the opposite sex. The future of romance, says Ritu, depends upon the willingness of men and women to step out of gender stereotypes and embrace unconventional relationships that allow partners to live on their own terms. 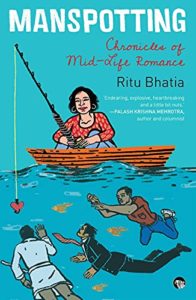 Ritu Bhatia has written a rare book – rare for Indians because it addresses the important issue of a single woman, looking for love in mid-life. Even as the numbers of single women increase in urban India, the scales have always been tipped in the favour of males, leaving an educated, opinionated, thinking woman, scratching her head at all the stereotypes that she meets.

I laughed out loud at so many places. From unsatisfactory coffee dates with men to follow a hunt-and-conquer strategy to those who drone on about their pet subjects, disastrous dinner dates with men with less-than-desirable table manners, and the ones who wanted to appear progressive but turned out to be the opposite. On her dating adventures Ritu encountered a long list of unsuitable prospective suitors who facilitated deep insights into the characteristics of Indian males who seemed to be stuck in the dark ages despite their ‘new age’ claims to the contrary.

In this book, Ritu has managed to achieve the right balance with a humorous touch while not shying away from the underlying biases and prejudices that contribute to a skewed view of single women being either easy or bossy or needing to be rescued. There’s humour and sarcasm and a clear-eyed assessment of the situation that is extremely relatable.

A great read that is both light and funny yet honestly asks the tough questions about the unfair situation that women face. Hats off to Ritu for pulling this off.

If you would like to pick up a copy of Manspotting: Chronicles of Mid-Life Romance by Ritu Bhatia, use our affiliate links at Amazon India, and at Amazon US.

Image source: a still from the film Once Again and book cover Amazon

Dr. Ranjani Rao is a trained scientist and a self-taught writer, the author of Rewriting My read more... Is Mother's Day A Socially Sanctioned Day 'Off' Once A Year For A Thankless Job Well Done?