Covid has taken away so many legends. Spanning the gamut of cinema from comedy to tragedy and all the many hues in between, Nedumudi Venu was a gem that shone with unrivalled brilliance.

Covid has taken away so many legends. Spanning the gamut of cinema from comedy to tragedy and all the many hues in between, Nedumudi Venu was a gem that shone with unrivalled brilliance.

News of Nedumudi Venu’s death today, made me remember a review I wrote a long time back on a reviewing site. It was on a movie I’d seen an even longer time back, as a kid, but that movie stayed with me. Rachana, the movie, got Bharath Gopi and Sreevidya the State awards for Best Actor and Best Actress, and they deserved it. But it was also one of the finest performances of Nedumudi Venu.

As a review goes, this doesn’t capture the finer nuances of film making, there are people who do that way better, but I hope my review makes you want to watch the movie. It is truly an unforgettable one.

I saw Rachana a long way back. Certain nuances of the movie totally escaped me, as I was a kid when I saw it. But even so, the movie about a writer and his experiments with creativity was searing in its impact.

Rachana in Malayalam means the same as Rachna in Hindi – a piece of work, writing, creation…

The movie starts off with the night sea. It is a breezy night, and an old man (Gopi) is being interviewed after winning an award for his latest book. As the waves crash upon the shore relentlessly and recede, the man talks about his experiences while writing the book, and he goes back in time…

Gopi and Srividya are a happily married couple, he’s a succesful writer and she’s a Head/Supervisor in an office. One day, there’s a new joinee in office. The new guy (Nedumudi Venu) is a country bumpkin who is so sensitive, his eyes fill up at the slightest rebuke from his Supervisor.

Srividya habitually relates all office happenings to her husband and she tells her husband about this new colleague of hers who provides quite a few laughs at office. On hearing of various bumbling incidents, Gopi is inspired to use him in his new story. He encourages Srividya to befriend the young man and enlists her help in creating certain situations to elicit predictable responses.

Srividya agrees and befriends her new colleague. She does not deliberately lie about her being happily married, but commits a lie of omission regarding the same.

She gradually draws the young man out of his cocoon of shyness and gets him to talk about himself, his sister and his family. They go for a cup of coffee, walk together to the bus stop, go for a movie ‘together’ except that Gopi accompanies them, unknown to Venu…

Each day she recounts the proceedings of the relationship to her writer husband. Since she is the Head of the Dept, other male office staff (who are Venu’s room mates) are intrigued by the relationship and egg Venu on. He turns a deaf ear to their suggestive jokes and comments, but gradually he too starts wondering if Srividya does not like him a little more than the others… and he starts to reciprocate, opening his mind and heart a little more, with each consecutive day. 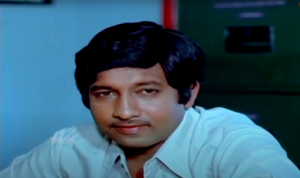 Srividya senses the man’s feelings and also the first pangs of guilt. She tells her husband that she does not want to be used as a pawn thus, but Gopi quiets her protests, saying it is only for a short while more, and that she is unnecessarily making a mountain out of a molehill. 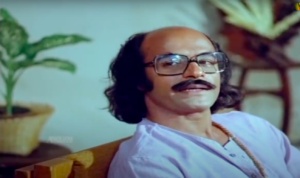 The unusual bond between Srividya and Venu grows, until finally Srividya can no longer bear to project such a false image. She no longer finds any fun in the proceedings and is consumed with guilt at leading Venu on, when she knows it is a totally futile and potentially heartbreaking situation for the vulnerable, shy and naïve Venu. She refuses to go any further.

Gopi tells her that she can stop with a last scenario- inviting Venu home for dinner under the false notion that her husband is not at home. 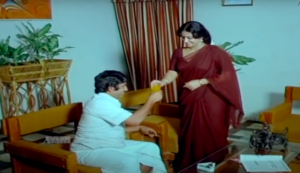 Venu is thrilled at the invitation. His room mates are too, and he sets out all agog for the rendezvous. At Srividya’s house, Venu is on tenterhooks,seeing that the two of them are alone. He even goes to the toilet in his nervousness. She serves him an elaborate dinner and dinner over, Srividya takes him to the bedroom, and tells him that she will just be back. Venu sits in anticipation, lost in happy dreams. He is all set to embrace her when she returns, make the final gesture of commitment…. She comes back – with a smiling Gopi in tow. They are ready to confess that the whole thing has been a huge joke, and are sure that he will join in.

But Venu is shattered when he realises that the whole thing has been a farce. He rushes out of the house. Srividya waits for him anxiously in office the next day, wanting to apologise, to make amends, not knowing what exactly she CAN do… but Venu does not turn up that day, nor the next day , nor the next. His roommates are not able to give her a proper response either and she is unable to concentrate on anything. Her hitherto loving relationship with her husband is affected as well, as guilt eats into her for her callous behaviour. 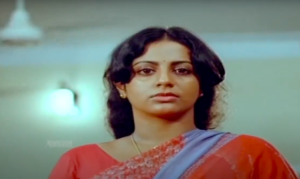 She finally goes to meet Venu in his room and breaks down at seeing his state. Their colleagues witness that she is genuinely torn with guilt and misery and worry, and take Venu to task for being such a silly fellow. They advise him to get over the affair and act like a grown man and resume office in a normal way the next day.

The next day a messenger comes to Srividya’s house – Venu has died of suicide.

Back to the sea beating relentlessly on the shores, coming forward and ebbing… The old man is Gopi, and the book that has won the award is their story- his story and Venu’s story and the story of Srividya, who lost her mind.

Actors who lived their roles

The movie’s success was in its characterization and the actors who lived their roles.

Nedumudi Venu was such a gauche, confiding, lovable chap, who wore his heart on his sleeve. Initially you enjoyed seeing him fall for Srividya’s wiles and laughed along with Gopi and Srividya at his naivete. But gradually you too start feeling that it is not right to play with his emotions in that way, and at the end you are as staggered as Srividya with the enormity of the hurt to his psyche.

Srividya is utterly believable as the happy wife who agrees to a little bit of tomfoolery to please her beloved husband. But then she genuinely comes to care for Venu and does not like making him a guinea pig. Eyes are truly windows to the soul- her lovely eyes are all sparkling and happy and contented in the beginning, but then towards the end, they reflect her tormented soul. Definitely one of her best performances

Gopi is the talented, successful author, to whom creative license justifies even playing with another human’s emotions as he predicts reactions. But then, life is not at all as predictable and sweeps over boundaries, taking you along with it.

And at the end, you ache for so many things- a gentle man’s ruined dreams and life, a happy housewife’s loss of peace of mind, and ultimately sanity, and the waste of a talented writer’s life- who’s suffered the biggest loss of them all, and who has to live with the consequences of his actions- day in and day out.

It was a hard hitting movie and a typically realistic mallu movie. Good clean fun in the beginning, only towards the end does your gut get twisted. This was one of the earlier movies that had today’s leading star Mammooty in a side role. He was one of Venu’s dashing, hip colleagues.

From the net, I find that Mohan was the director, Anthony Eastman the writer, and the screenplay was by John Paul and the movie was released in 1983.