This gets upon the nerves of all adolescent girls and did happen with me too, so much so that I started hating my periods.

Never in the contemporary times, has menstruation covered so much media space as in recent years. There has been films- “Padman” and “Period. End of Sentence.” Both these films set up in Indian milieu have bagged awards, the National Awards, as well as an Oscar.

Media prime times debated if period leaves are justified purely on account of biological process or this would further aggravate the gender divide and put female gender at disadvantaged and called out. As has been happening with very progressing maternity leave- which is kind of universally recognized but not really accepted at office corridors.

Beyond those positive developments not much has been happening around changing the situation on the ground.

For example, as per National Family Health Survey 5 (2019-2020), if we look at the statistics of Bihar, only 42% of girls in the age group of 15-24 years were using sanitary napkins, and another 2 \% tampons. Rest were relying on clothes etc which often compromise hygiene.

Beyond this so-called mainstream spectacle, millions of women suffer many ways on the altars of social practices carried over thousands of years.

How does menstruation change a person’s life?

Menstruation brings lot of body changes among women which marks transitioning of a girl’s body into a woman. Do confused young girls enjoy this womanhood with those pricking sensation in the boobs, cramps in the stomach, waist and legs and the rashes and itchy feeling around the vagina. The answer is absolutely NO. While, girls need to be more pampered, fed a nutritious diet and given more rest on those days but on the contrary, they are period shamed and stigmatized even inside the family.

For a regular 13-14 years old,  periods bring a drastic change in their lives. At times she considers it some internal disease or injury due to restrictions on sports, cycling or other physical activities, which is often not shared with family. Usually the mother or elder sister clean the stains on the clothes and casually describe it being a natural body process. That little girl is not told and hence remains oblivious about the fact that it would happen every month for 3 to 5 days and period makes one a complete woman. While the prospect of being a complete woman might excite a bit, ordeal there after gives a strong feeling – “why this had come to them?”

And here begins the chain of age old regulations

The real torture starts thereafter with the countless restrictions. She is not allowed to touch the temple at home or the pickles, cannot enter the kitchen, cannot sit everywhere in the house or go out to play, wash panty with the leftover detergent cakes kept at one corner of the washroom and cover the panty with towel while drying it. It makes one feel like a prisoner in their own home for those 5 days.

This gets upon the nerves of all adolescent girls and did happen with me too, so much so that I started hating my periods.

Do the boys face this too?

Bodily changes are there in the opposite sex too. Boys experience manhood more or less at the same time but their change in voice, growing moustache are never stigmatized, rather celebrated that they are growing up to become complete men. Patriarchy has its own way of running the society where manhood is celebrated while womanhood is silenced. 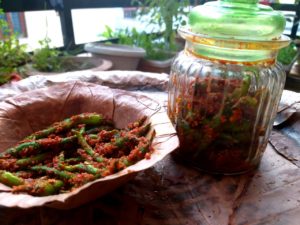 Pickle- I love making, eating and touching on all days. As we talk about it.

Great feminist scholar Gloria Steinem has rightly put in her famous satirical essay “If Men Could Menstruate”, it could have been celebrated as biggest virtue and invited many concessions etc at workplace or otherwise from the society.

It’s time we break this silence and shout out loud that we are proud of our periods. The debate must be on for 364 days but this one day i.e. Menstrual Hygiene Day(28th May) we must make it loud and clear that we no longer accept the stigmatization of periods. It’s a natural body process and everyone must know and respect a woman’s body. Let’s not take the sanitary pads packed in black covers, let it be visible to everyone as we do not want to hide it anymore. Let’s discuss the period issues on the dining table, office cafeterias, in the parks, everywhere. Let the period panties dry in the sun and nutritious diet be served to the women. Let’s ensure safe and hygienic period to every woman in the world.

And more than that, my husband, mother and mother in law often quote that the pickles taste best when touched by a menstruating women. May this this come true for every household.

A full time mommy of two young girls, of which one is lockdown baby. She

From Sustainable Menstruator To Menstrual Educator: What I Learnt Beyond Just ‘Hygiene’