Sharing Maggi On The Day Of My Wedding, My MIL & I Made Our Own Ritual!

My perception of MILs was always that of women like Kokila Ben or Lalita Pawar. However, my MIL changed that on the day of my wedding!

This post was originally published on the Women’s Web Hindi channel and was translated into English by Mrigya Rai.

After leaving my maiden house, I was standing at the door of my mother-in-law’s house. There was a fear in my mind and countless questions about how would everyone be.

In my mind, a mother-in-law’s image was completely like the TV serial mother-in-law that is – Lalita Pawar and Kokila Ben. I had seen my mother speak to my grandmother in a scared and suppressed voice all the time. My mother wouldn’t do anything without taking permission from my grandmother. In fact, my family actually was quite a conservation one, with a number of rules and obligations for the daughters.

I was waiting nervously in the car

After the wedding ceremonies and everything, I was in the car in front of my mother-in-law’s house, my head covered in a long veil. Just as I looked up, I saw my mother-in-law rushing towards the car. She was closely followed by my aunt-in-law who had a lota (tumbler) of water in her hands.

As they approached the car, I could hear my aunt-in-law scolding my MIL Sarla-ji, ‘I am warning you, bhabhi. Don’t dare to open the door before you perform the ritual!’

‘Arrey! I wasn’t opening the door, I was only going to lift my daughter-in-law’s veil up through the window. She must be suffocating in it. God only knows who asked her to wear such a long veil!’ My MIL answered with such innocence that I couldn’t help but smile.

She then put her hands inside the window, lifted my veil up and said, ‘Yes! Looks much better now. Why did you wear such a long and heavy veil? Were you not suffocating in it? How were you even breathing! My daughter-in-law is such a beautiful woman, you don’t need to do all this!’

‘Jiji! Give me the lota and please don’t glare at me like that!’ Saying thus, maaji took the water and finished the ritual quickly. However, during all this, aunt-in-law continued murmuring in anger.

How can we expect her to follow the rituals now?

After I stepped out of the car, maaji took me directly to a room that was right next to the kitchen. The house was filled with guests and I noticed maaji was sitting with her head in her hands.

Seemingly out of nowhere, my aunt-in-law appeared and said, ‘There is a lot of work to be done, bhabhi. Wake up and stop lazing around under the pretext of a headache.‘

Maaji looked at her and responded, ‘Look jiji, I am used to drinking tea in the morning and now my head hurts from not being able to do that. I don’t think I will be able to do all this.’

At that, aunt-in-law said, ‘When the MIL won’t perform the rituals, how can you expected the DIL to follow them. She is a modern-day girl, isn’t she?’

I was listening to the conversation silently and everyone else was busy with their own work. Since I saw no one in the kitchen, I got up and made a cup of tea for my MIL who was now, lying on the bed.

She quickly sat up after she saw the cup in my hands.

Maaji and I decided to make our own ritual that day

‘Arrey! Why did you have to make the tea?’ she asked me as she took the cup, her eyes filled with tears of joy. Then, she stood up and closed the door to the room. I was scared and wondered why she closed the door. She walked to the kitchen as I sat quietly back on the bed in fear.

A few minutes later, she came into the room with a tray in her hands. I was surprised to see two bowls of Maggi and two cups of tea on the tray. Giving me the Maggi, she said, ‘Let’s eat. I know you haven’t eaten anything since yesterday. You must be hungry. I know I am hungry! Let’s eat before it gets cold. ‘

Just then, we saw aunt-in-law in the window. She looked at us and said, ‘Hey Ram! This saas-bahu pair is sitting here and eating Maggi behind closed doors. Meanwhile, a whole set of rituals is yet to take place.’

I love my MIL’s house more than my own!

Maaji took some Maggi on her spoon and said, ‘Now there will be no ritual, jiji. Other than my daughter-in-law and me, you are all also tired. We’ve all stayed up all night. Enough is enough. Everyone take rest and let me and my daughter-in-law rest as well!’

And that day, all the rituals of my wedding ending with eating Maggi with my MIL. Today, I can proudly and happily say that I love my MIL’s house more than I love my parents’ house. My MIL doesn’t have any strict rules here. I have the full freedom to wear what I want, eat what I want and go where I want.

From my own experience, I can say that not every maternal house is necessarily the best and that not all in-laws are bad. In-laws can be great, like mine, all they need is a good mindset! 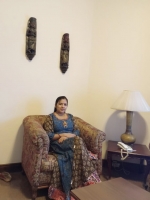