Women Are The ‘Karna’ Of This Generation

Women are the Karna of this world, we have all the qualities to be treated equally but just because we are born a girl we face discrimination

Women are the Karna of this world, we have all the qualities to be treated equally but just because we are born a girl, we face discrimination.

Karna’s talent was never acknowledged by society as he wasn’t a Kshatriya, hence he was not allowed to practise shastra vidya. Though he was the most talented out of all the Pandavas and Kauravas, his mother never admitted that he is her eldest son as she was scared of the samaj or society.

Karna kept on proving himself and his talent, time and again in order to get what he deserves but the people around him and the society kept on defaming him and demeaning his talent. Karna was a strong-headed person, he challenged everyone who came in front of him to remind him about his caste and social status. He never feared anyone and at the end he did get what he deserved, his mother acknowledged the fact that he is her own son. Society acknowledged him as a ‘dhanurdhari’, ‘danveer’, ‘maharathi’.

Karna did make some choices which were not been liked by many, he was called an opportunist, adamant and stubborn but it was the society who forced him to make such choices in order to obtain the respect that he deserved.

How are women similar to Karna

Many will argue that “what is stopping you, girls are flying planes, writing books, practising medicine and doing whatever they want.” But as per me and the situation I see in and around my circle, on social media, in my neighbourhood or at work, I can see that by merely me becoming a pilot things will not change completely for the entire fraternity.

I feel we are the Karna of this modern world, we have all the qualities to be treated equally as the other gender however just because we are born as a girl we face discrimination in various walks of life. I don’t think I need to quote any example, it just requires a brain and a pair of eyes or ears to feel  how discrimination happens every day around us and we consider it a normal scenario as it has been happening since ages.

Now we are labelled as feminists and some even call us pseudo feminists. This is the phase of Karna’s life when he was a youngster, he has faced enough discrimination in his childhood but now he was a learned person who was willing to face all the challenges without getting affected by it but he is stubborn to stand up for the right. I am, Karna the talented one, the stubborn one, I am maharathi Karna. 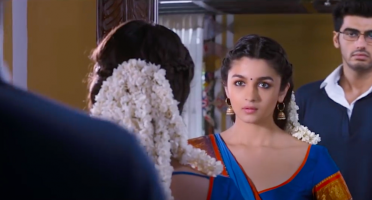