Do You Think That ‘Tribal Culture’ In India Is The Same All Over? Here’s Destroying That Myth

Through her book White as Milk and Rice, author Nidhi Dugar Kundalia attempts to make the reader understand, empathize and connect with India’s isolated tribes.

Through her book White as Milk and Rice, author Nidhi Dugar Kundalia attempts to make the reader understand, empathize and connect with India’s isolated tribes.

The first time I got some glimpse into tribal life and culture was in May 2012. We had spent a weekend at Tyda Jungle and it was an experience we cherish even today. Of course, we were the tourists there accommodated in a resort, hence what we got back then was like feeling the gentle waves of the sea, not knowing what it might be like to be soaked in the water in all its manifestations.

This supposedly simple line struck me hard. How many of us even consider the marginalized community of tribals a truth, forget being aware of their history and tribulations? How many of us even have the time or inclination to spare a thought about what it must be like to simply fight for identity and define one’s existence?

The title of the book piqued by curiosity too. I wondered what could be the story behind the title and my questions were answered soon enough.

To veer out the negative view on them and for better acceptability, the Kurumba tribe had prefixed their name with ‘Alu’ which means milk in Kannada. Similarly, the Halakkis get their name from the rice grown by them which is as white as milk. Therefore, it is a fitting title to the book and also pertinent because it addresses the prejudice held against the tribals.

A privilege check for me

‘Non-fiction’ does not appeal to me easily, but this book is different. It is an eye-opener. It is an enrichment. It is a privilege check. It is humbling and moving. Through White as Milk and Rice, the author attempts to make the reader understand, empathize and connect with India’s isolated tribes. She steers away from making any socio-political commentary and rather focuses on bringing out the stories of tribal communities with solemnity and honesty.

According to me, this is where the strength of the book lies because an untold story will always make way to every heart.

A deep dive into the lives of 6 Indian tribes

The narrative is intriguing and engaging throughout with Kundalia revealing various aspects of the lives, beliefs, history and day-to-day struggles of six communities that she explores for the purpose of the book. The mammoth efforts that must have gone behind performing the research is evident in the level of detailing.

What we get is not a surface level, dry account of the tribes but insightful, in-depth and heart-warming tales which make the reader become a part of the journey of exploration of the author. What I particularly liked in the book is that each of the chapters have been chronicled from the point-of-view of a character/set of characters which makes the proceedings more relatable, making it easier for the reader to delve into the world which is so starkly different from ours.

The six communities – “The Halakkis of Ankola”, “The Kanjars of Chambal”, “The Kurumbas of the Nilgiris”, “The Marias of Bastar”, “The Khasis of Shillong” and “The Konyaks of Nagaland” – exist in different regions across India and have their own unique culture, settings and ways of life.

This was a revelation because often we tend to have a stereotypical idea of “tribals” and paint them with a single broad brush, but there are so many worlds that exist within this one world.

It was interesting to know about many of the customs and coping strategies like teenagers in Bastar being allowed to explore their sexuality at a common house before actually settling down into a single household.

Or about how two Khasi sisters face the burden of a matrilineal society in Shillong, something which the women in the rest of the world crave.

Padma Shri Sukri of the Halakki tribe instantly caught my fancy and left me in awe, so much that at the end of the chapter I felt there could be a book written solely on her life and her songs that are fundamental to her survival. 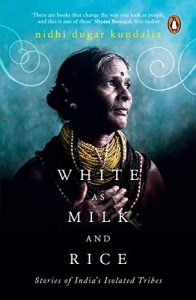 The language in the book is rich, poetic and inspiring. It flows rhythmically, alternately intensifying and ebbing, with powerful and evocative imageries. Every effort has been made to stay as authentic to the premise as possible, while also ensuring that the reader is an ally and not taking a peripheral view of the accounts.

However, at some points, it was not clear if there are some fictional elements incorporated in the chapters. For example, in “The Khasis of Shillong”, the lines seem blurred and it felt like an abrupt shift in the feel and tone. That said, this does not take away from the overall impact of the book.

An important book about a lesser known aspect of Indian societies

White as Milk and Rice is a significant contribution to Indian Literature. Not only because it highlights the challenges of the tribal communities in adapting to the rapidly evolving country and integrating with the conventional societies, but also for us to become aware human-beings who desperately need to break the different bubbles we keep getting into time and again.

Their sources of livelihood, the treatment they are meted with, their history, their resilience, their knowledge about their milieu – they have so much more to them than we know. The least we can do is make a sincere attempt to understand and this book is the best starting point to get there. Please do read!

If you would like to pick up a copy of White as Milk and Rice by Nidhi Dugar Kundalia, use our affiliate links at Amazon India, and at Amazon US.

Image source: a still from the film Jait Re Jait, book cover Amazon