As A Mother Of Preemies, Quarantine, Isolation & Social Distancing Feel So Familiar To Me

This mother of premature twins, is reminded of the much more stringent and fearful lockdown that she and her family once endured.

It’s been more than three months we are all locked in our houses; in fact, a majority of the world is experiencing the same. Although lockdown has now been lifted in many places, it is still considered advisable to stay home.

Since the beginning, most people are exasperated with the idea of staying at home, maintaining social distancing, cleaning, disinfecting and sanitising the surfaces regularly, and frequent hand washes, that too for a good 20 secs. They fear getting bored and are worried about how to manage anxiety while in isolation.

But somehow none of us were touched by these feelings. We do miss the kids going to school, social gatherings, outings, and summer vacations, but did not find it all that difficult to adjust to the New Normal.

Many a times it has hit me, as to why it’s not a big deal for us where others are finding it difficult to adjust!

Now since my twins’ birthday is approaching, I did a little time travel into the past and realized, “Oh, I have lived this life 6 years back, and in fact a much tougher one than this where I have experienced isolation, social distancing, sanitisation and most importantly, fear and anxiety.”

I just rolled over in my memories and this is how it went.

My twins were expected to arrive on 2nd Oct, but somehow they were not liking mumma’s tummy and came out too early. Despite all the doctors’ efforts, they came to the world on 4th July – yup, almost three months early!

From there we started our eight month long journey of fear and hope, where sanitizers, isolation, frequent and long hand-washing, medicines, hospital, anxiety, boredom, and frustration became our companions.

Immediately after birth, they were sent to the NICU; I could not even get to see them the day they were born.

During every visit to the NICU, before entering we were supposed to wear an apron provided by the hospital, change our shoes and thoroughly wash our hands till the elbow. In case we wanted to touch our kids, (which wasn’t much encouraged and we were scared too), we had to sanitise our hands thoroughly, and before touching the second baby, again hand sanitisation was mandatory.

A poignant journey of isolation

After spending two months in the NICU, when my son came home, our poignant journey of isolation started. I was confined to one room with him. Visits to my daughter, who was still in the NICU, were still restricted to just once a week, during which my husband stayed with my son.

When my daughter also joined us, after spending three and a half months in the NICU, that was the crazy time. I rarely came out from that 12’’ by 12’’ room and taking the kids out was completely out of question. No one was allowed to enter the room, it was strictly prohibited.

We were scared like hell, as to how we would manage the kids alone at home. We had a long list of do’s and don’t’s. We could not allow many people inside the room as the babies had low immunity and the risk of getting infection was high. Moreover, we had also witnessed a few cases in the NICU where babies had shown improvement but were later not able to make it as they caught an infection.

In all the madness, we also had to ensure that we too do not get any infection as it could infect the babies as well. So…no outside food, no outing, no socialising…again just that 12” by 12” room. It was just like the social distancing that we are all experiencing these days.

Sanitisers were our lifeline, and became our daily essentials. Sanitising hands after touching each baby, disinfecting their bed and other surfaces, we were particular about cleanliness. They didn’t have even a single toy till they became six months as we were worried that they may get some infection.  Remembering all this still gives me the goose bumps.

In fact, for me, these days are better in comparison. At least I can go out to buy groceries, roam freely around the house, cook meals to be relished together, play games, sit in the balcony and spend our time together. We listen to each other as compared to those days when our outings were limited to compulsory hospital visits only.

An uncertain time that we got through

At that time it was only the four of us who were struggling, and I was not sure about the outcome – whether my children would be able to make it out or not. My husband and I were silent spectators while the little ones were in the NICU where they were alone but dealing with oxygen and food pipes, cannula, blood transfusions, IV, blood tests and so many wires attached to their tiny bodies (though that is a story for some other day)

At home, we gave it our best or more than we ever thought we could, but at last we came out of the situation.

And now during this Covid pandemic, it’s the whole world which is suffering. We are all together in this. Doctors and scientists are working hard and we are certain that sooner or later we will find a solution and we’ll come out of this pandemic.

Therefore, we aren’t anxious or stressed due to isolation, hygiene, and social distancing, as these were our companions once upon a time, and we successfully dealt with them by taking all the precautions that we needed. 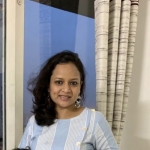 I am a mother of lovely boy and girl twins. Chartered Accountant and Company Secretary

As A Freelancer, How Do You Deal With All The Stress And Chaos Of Having Everyone At Home?

Isolation In The Times Of COVID-19: What You Can Do To Keep Yourself Sane

Lonely In Lockdown? Let’s Huddle India Is A Safe, Inclusive Online Space To Connect With Others