Doctors, for years, are misrepresented on Hindi TV shows. So on the occasion of Doctor’s Day, let me tell you a little about what real doctors do!

July 1 is celebrated as Doctor’s Day and with COVID-19 spreading the way it is, doctors have gained even more respect than usual. As one of the most respected and revered professions, doctors are often considered Gods who reside in the sacred place called a hospital.

But trust me, becoming a doctor is NOT an easy task. You have to clear entrance exams, study hard for five years and train before you actually have the Dr. before your name.

We all know how TV shows and media shape our perception. I mean, don’t we all have the ‘perfect’ idea of love thanks to Bollywood? A perception of households because of Hindi daily soaps?

Due to all these, the one thing that pops in my mind when I hear the word ‘doctor’ is the doctors in Indian TV shows.

The above TV serial is the trailer of very famous medical drama Dil Mil Gaye. All of this looks really happy right? I mean, you have doctors dancing around, wind in their hair (inside a hospital!) and everything so chill.

But wait a minute, is this the reality? Oh hell no! A hospital in TV shows is such a fun place it sometimes feels like an amusement park. Matlab kuch bhi dikhate hai!

It’s a hospital, not a park!

Well for starters chilling around and swaggering in the hospital premise is not quite the reality of an real hospital. You ask why? Because ain’t nobody got any time for that!

A regular real hospital has their regular patients, emergency patients, critically ill patients and visitors and patient’s families in the same place! Be it a government hospital or a fancy private one, doctors don’t have the time to practice their catwalks in the middle of a hospital!

Not just that, the canteens and locker rooms for TV show doctors are like a college adda. They play games in the canteen, chill and sit where and when they want, and romance in the locker room.

On top of that half of the episode always goes either in locker room romance or canteen fun. In real life, this much ‘chill time’ is not possible. Because firstly hospitals have a decorum – it’s not your house where you can do whatever you want. Secondly, well, doctors kind of have important work to do, like saving lives maybe?

Now, this is not just something that medical dramas have but mostly all Hindi TV shows and movie have. A sudden gust of wind makes the lead’s hair fly in all directions!

I really don’t understand how in a closed hospital where does this hawa ka jhonka come from to give our heroines this moment? Also, did you know, all these ude jab jab jhulfein teri moments and untied hair are usually a big no-no especially while examining patients? I mean, are you going to check the examine the person or handle your own hair?

Ah! The romance, the chup chup kar milna, the pinning of the heroine up the wall and those stolen glances we are shown! First, due to their basic purpose, hospitals are generally crowded places so getting that me-time and a private place for those steamy romances is kind of not really possible.

It’s not that workplace romances don’t exist for doctors, they do! But they aren’t the pinning against the wall or dropping books and paper flying here and there ones. Matlab, kuch bhi! 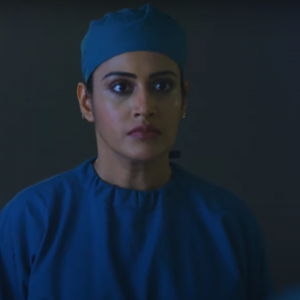 One very prominent feature of female doctors is how they are always impeccably dressed. Not a hair out of place, despite the wind in their hair moments and their make up is always on point! No chipped lipstick of smudged eye-liners here!

I’m not saying doctors don’t dress up, they do. They also wear make up and do a damn good job of it! But when they are in a hospital, they kind of are in their coats or scrubs without make up because you know, Operation Theatres (OT) tend to get a little stressful.

Meanwhile, the doctors in TV shows look like they are headed to a party even as they step out of the OT or after a long day at work.

But it isn’t just the females who are dressed in unrealistic ways, the men too have their own ways to show off. More often than not, the male lead in these shows is the one swaggering around the hospital with more than half his shirt open. We get it, he is a buff doctor, but hospitals generally have a pretty strict dress code – for both men and women!

Most of the main leads in these serials, for instance, Sanjivani or Dil Mil Gaye are junior doctors or at the most resident doctors. But despite that, they are given way too much importance. So much so that they even conduct major surgeries!

No proper or real hospital actually does this. A resident and a junior doctor generally go through years of rigorous training before they are handed the whole OT to themselves. I mean, the patient’s lives generally matter to the hospitals, you know?

The way these series show hospitals as fun places, makes you wonder if they live in an amusement park! Hospitals, really are not fun amusement park kind of places. At any given time, most hospitals are dealing with several severe and critical cases.

That being said, doctors do celebrate birthdays and victories but they do not throw parties in there! A certain decorum needs to be maintained at all times, mostly for the sake of the patients who are there to recover, not have fun. I mean, come on!

Celebrations are good and some times necessary too but not during work hours. When they are at work, often, people’s lives are literally in their hands!

Yes, TV shows exaggerate and make the life of a doctor seem fun and games with some masala. But it’s not the reality. Doctors are fun to be around, yes but they don’t go to the hospitals because they want to have fun! When they work, they are serious and they make sure they save the lives in their hands.

So this Doctor’s Day, let’s salute these wonderful people for their sacrifices, efforts and incredible patience. Show them some love and ask them their stories, I’m sure they have a lot of them.