Kriti Sanon, and Rhea Chakraborty trolled not being 'sad enough' after Sushant Singh Rajput's death. Is grief only valid if its shown on social media?

Kriti Sanon, and Rhea Chakraborty trolled not being ‘sad enough’ after Sushant Singh Rajput’s death. Is grief only valid if its shown on social media?

The past few days have been very disturbing for several people, especially in the light of actor Sushant Singh Rajput’s death by suicide. His death, while raising several important questions, related to mental health issues and opened discussions on talking about the same.

Sadly this ‘talk’ is just that and doesn’t seem like something people care about. I say this since, actors Kriti Sanon, Shraddha Kapoor and Rhea Chakraborty were trolled for not speaking up about Sushant Singh Rajput’s death online. They were incessantly attacked for not having posted ‘enough’ about his death on their social media handles. I mean, they are celebrities, how can they mourn a loss privately, they are ‘supposed’ to show it to people, aren’t they?

After Sushant’s death, social media was filled with #MentalHealthMatters. However, that didn’t stop people from harassing and bullying the three women for not writing emotionally long messages on social media.

Shraddha Kapoor, who worked with Sushant Singh Rajput in his 2019 movie Chhichhore did not write a message on social media expressing condolences. Thus, she was trolled on Twitter for not publicly speaking about her sadness.

Kriti Sanon, rumoured to be Sushant Singh Rajput’s ex-girlfriend had a barrage of comments that spewed hate at her. Comments like ‘You’re so heartless’ and ‘Ek post tak nai dala,’ were so severe her sister Nupur Sanon had to release a statement. In her statement, Nupur urged people to take into account Kriti’s mental health too! 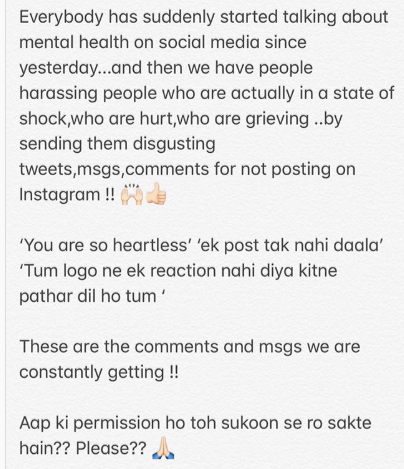 And Rhea Chakraborty, who was his rumoured current girlfriend, wasn’t spared either. She allegedly was present at the hospital where his body was taken. And here too, she was constantly trolled to the point where she had to turn off the comments on her Instagram profile to stop people from hating on her.

Troll them for not being ‘sad enough’?

Because obviously if someone is sad they need to prove it to people or else they are just heartless, aren’t they! But had these women expressed their grief immediately, trolls would still have attacked them.

Trolls would have gone to the other end and said things like, ‘OMG. Doesn’t she even feel sad?’ or ‘She’s putting her sadness on social media. What an attention seeker!’ They would have done it because that’s what we do! And it’s not just with celebrities it’s with normal people too.

I remember when my dad passed away and I was not grieving publicly, beating my chest and crying. People around me believed, I wasn’t ‘sad enough.’ They talked behind my back and said things like, ‘Omg what a shameless daughter! She doesn’t even grieve for her father.’

Not just then, even today when I don’t post anything about my dad on social media, people ask me if I don’t miss him. Obviously I can only be sad if I look sad and only miss someone if I broadcast it. Right?

Is a social media post the only way to ‘show’ grief?

The trolls seemed to have shut up after they saw that the three women were few of the people from the industry to have attended his funeral. Several people also stood by them saying, though they didn’t post anything, at least they showed their care by attending the funeral.

She had not given any fake sympathy post on social media but she was there in funeral of Sushant..she was one who gone there first when not a single big name was there…. Except #ShraddhaKapoor ❤️@ShraddhaKapoor pic.twitter.com/SFTf7qZCCh

Later, Kriti even posted a heartfelt message on Instagram yesterday for Sushant.

It still doesn’t change the fact that trolls did not wait to harass these women, making me wonder, yet again, where is our sensitivity? Why do we want celebrities to post every single life incident on social media? And why can’t we just let them be? What kind of mentality makes people feel like these women do not need privacy to feel normal human emotions?

On one hand, we’re preaching about mental health and at the same time, we don’t care about these women’s mental health! We need to understand that social media is not the only way to grieve.

People can grieve in peace and don’t need to broadcast their life all the time. Kriti’s mental health was so disturbed by all this, that she posted a note on Instagram. Here, she slams social media for being the ‘fakest, most toxic place.’ 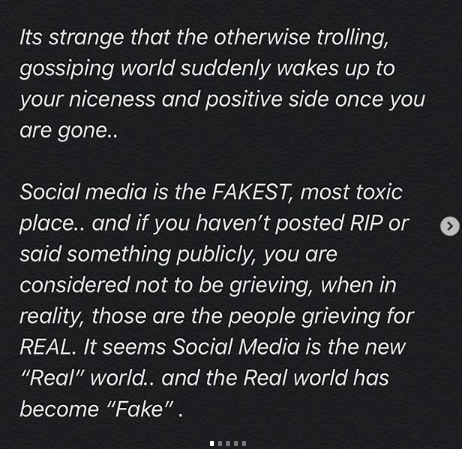 Can we let celebrities be humans?

It’s not new for people to poke their noses in everyone else’s business. Whether it is something related to happiness or something for you to grieve, society just doesn’t let you feel the human emotion in peace.

Everyone is sad for Sushant’s sudden demise. And people are blaming each other. So it’s high time that we move beyond trolling people, beyond being a critic and judging people.

It is time, we looked at making a healthy environment for people to speak up without the fear of being judged. We need to be a little more sensitive towards each other and that starts from the very ground level.

Let’s try to be kinder now?