Living With Your Parents May Seem Like An ‘Adventure’ To You, Dear Husband, But It’s Miserable For Me!

Priya came from a modern family. But things changed drastically after her marriage since her MIL hated her with a vengeance. Adventure? Definitely not!

With the saree palla heartlessly settled on her head, she was perspiring horribly, not used to cooking in such a manner. She peeped outside the kitchen to check whether the adjoining living/dining room was empty. Finding the coast clear, she threw the saree from her head and tucked it fiercely near her waist.

The momentary relief, she enjoyed barely lasted a second, and was broken by a throat clearing sound from somewhere behind her. In response, her throat became dry and unwillingly. And against all her might, she untucked the saree from near her waist and placed it back on her head.

Priya released a heavy breath she had been holding, and turned around to face the woman who was responsible for her dreadful plight.

“Yes, mummyji?” she said with a smile.

Her expressions spoke more than her words did

“You forgot!” mummyji replied with the biggest scorn. “Yet again you forgot the time for your papaji’s tea!” she said slowly stressing on each word. Her expression clearly said, ‘will I have to remind you everyday?’

Before Priya could respond, she turned around and went back to her room, running a nonstop commentary in her husband’s ears. This usually included complaining about the side effects of marrying their only son to the girl of his choice.

Soon it was lunch time, and since it was a Sunday, her husband Naresh and daughters, Ria and Dia also took their places at the dining table. Priya served lunch to everyone, and moved to the kitchen to make more chapatis, when her mom-in-law stopped her.

“Did you wash papaji’s kurta?” she questioned sternly. She was all set to lash out at the drop of a hat.

“Yes mummyji,” Priya replied proudly. “I already put all the clothes in the machine. The kurta will be dry by evening.” As Priya started to turn around, she was happy for once having been saved of the ‘good for nothing’ lecture. But she was in for a surprise.

Her husband meanwhile just ignored it all

“Machine! Again?” shrieked mummyji. Calming herself, she continued, “How many times do you need to be reminded about everything, bahu? I specifically told you that machine washed clothes become very rough after drying, and not to wash my or papaji’s clothes in the machine, but by hand…” Mummyji let out a huge sigh and looked at his son dejectedly. She shook her head in dejection and moved her attention back to her lunch.

Stunned, Priya looked from her mom-in-law’s disgusted scowl to her husband’s averted eyes who pretended to have not heard a thing! The order of ‘garam roti!’ made her move her eyes from Naresh and head to the kitchen.

Later, Priya was arranging the clean utensils, lost in her own thoughts of. Grumbling and mumbling to herself, she moved her hands, not really aware of what she was doing.

Adventure, he had promised her

“Just think of it as a new adventure, sweetie,” he told her lovingly. “I’m sure you will enjoy it this time, trust me.” He squeezed her hands gently in an attempt to make her believe in him.

Priya had serious doubts in his beliefs, but seeing him so excited, she didn’t have the heart to say no. He had hugged her tightly when she had agreed to his request. But whatever happened today was playing on loop in Priya’s mind.

“Huh! Adventure, my foot!” she burst out at herself.

Life had been smooth and easy for her, till that wretched phone call came, changing the course of her life! Her mom-in-law called Naresh late at night, ten days ago, and started to cry unconsolably.

“Your father is not keeping well for the last few days,” she told him in between sobs. “He misses you a lot and keeps crying just thinking about you.”

These words were enough to make the heart of the ‘son’ fill with emotions. And under the effect of the same ’emotion’, Naresh announced to Priya that he would bring his parents from the village. He told her they would stay with them. Priya was aghast at this thought but had no other option than to agree.

And then, began her experience of hell

Life had been a literal hell for Priya immediately after her marriage, twelve years ago. Coming from a fairly modern background, she knew adjusting in Naresh’s conservative family would be difficult for her. She had made this clear to him before deciding to get married. But he promised he would balance everything and take care of bridging the gap between her and his family.

“Besides, it’s just a few days. After that, I’ll take you with me to Delhi.” The ‘few days’ turned into almost a year! And Priya endured all of it alone, without any respite.

What made her life so difficult with her MIL was the fact that Priya was smarter and more independent than her MIL would have liked. Her confidence and boldness did nothing but increase the animosity and jealousy in her mom in law against her. Add to this, the main reason for her MIL’s dislike was that her son, had chosen Priya. She hated the fact that her son loved Priya more than anything in the world and was determined to make Priya’s life a living hell.

Despite having never worn a saree in her life, Priya was expected, rather forced, to do so. Not only that, she was supposed to wake up at five in the morning, dressed in the saree and throughout the day, make sure that the palla never left her head.

She was expected to do it all and by herself

She was expected to cook all the meals herself, eat alone and after everyone had eaten. And as if, none of this was enough, she was expected to wash everyone’s clothes, that too by hand! Priya didn’t remember if she’d ever washed even a handkerchief in her life, but here she was!

During that time, her nights were filled with incessant crying and days with miserable horrors. To add to this, living away from Naresh affected her even more. Ultimately, after threatening him that she would leave home, she managed to escape her MIL’s atrocities.

Since then, she lived a life of bliss and contentment, happiness and love. Though her in-laws visited them for two or three days every three-four months, Priya had never misbehaved with them. She made sure that she fulfilled all her duties as a daughter-in-law, just like her mother in law liked.

But today, all limits were crossed, and, now, it was becoming difficult her to survive. Not only was she forced to change her lifestyle completely and live according to her mom-in-law, she was once again thrown in the same pit of distress. The pit she ran away from, years ago. In only five days, she felt that she was losing all control over her sanity.

She felt confined and lonely

She was purposely being confined in the house, given no time to go out or talk to her friends. And was made to do all the chores of the house alone (except the cleaning part) by hand. The maid wasn’t even allowed to enter the kitchen.

From cooking to cleaning utensils to washing clothes to folding them, she was expected to do everything. She wasn’t even allowed to sit with everyone or have her meals with them. And had to wait till everyone was done eating to eat.

In short, the pathway to gloom, despair and depression was being paved for her by her husband. Meanwhile, her MIL was lovingly decorating it with stones and pebbles!

The same throat clearing sound from behind broke her chain of thoughts and brought her back to reality. But this time, she chose to ignore it… ignore her loosely hanging saree palla and the person making the sound behind her.

This time, though, she ignored it

A loud and clear bout of coughing followed. This time, Priya stopped what she was doing, turned around and left the kitchen without saying a word. Ten minutes later, she came out of her room, followed by a harried looking Naresh. She dumped the saree out of her way and was dressed in a top and jeans. Seeing her in this attire, her MIL almost had a mini heart attack.

“Bahu!” she shouted at the top of her voice. “How dare you?”

“I’ll let you know about how I dared, mummyji, but later,” she cut in. “Right now I’m running a little late to meet my friends.” Saying this, she started walking toward the door, completely disregarding the flow of words coming in her direction.

As she was about to leave, Naresh stopped her quietly. There was pain clearly visible in his eyes, astonished at his wife’s changed demeanour.

“It’s okay, Naresh! Don’t worry, take it as a new challenge, a new adventure in your life. And your mothers’ too,” she told him with a wink and a broad smile.

“I’ll return late,” she continued, “order dinner from outside. Bye!” And without a backward glance, she walked towards her road to freedom. 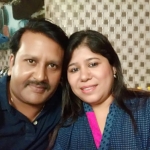 simple woman with simple dreams...loves to read and enjoys to write...