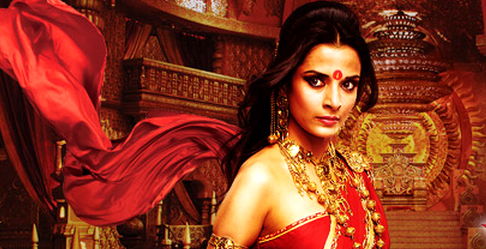 Be it Draupadi, Sita, Mandodari or even Hidimbi, the women in our Ved and Purans are fierce. Here are 10 of my favourite ferocious mythological women!

One of the good things that this lockdown has brought in, is the re-telecast of several mythological shows on national television. Never did I expect my 8-year old daughter to be as fascinated by these stories as I was when I was a child.

However, there are a few things about Indian mythology that raises doubts and questions in my mind now and then. One of these is about the role of women in these stories. Women in Indian mythology (particularly referring to their on-screen portrayal) are often perceived to be playing only a supporting role.

But is it really true? The evidence suggests otherwise. As the famous scholar, Altekar, argues women’s position in the Vedic age is much better than we ordinarily expect it to have been.

Hinduism is based on the core ideology that soul has no gender. Even in the Vedas, and ancient scriptures, women were given as equal a status as that of men.

Both men and women were given similar education, training and grooming. Scriptures talk about women in ancient India participating in various rituals. They also played roles in the society that were later defined only for the men.

Delving deeper into the mythological stories in India, I think women deserve a greater appreciation. They didn’t just shed tears and follow their fathers, husbands and sons. The subtle power and leadership qualities exhibited by women in Indian mythology elevate their stature to role models.

Here are my favourite women from Indian mythology who have been the epitomes of great power and strength. The courage with which they played their roles in epic stories is something to be remembered and imbibed.

Gargi, one of the few famous female Indian philosophers and seers, is known to have composed several hymns on the human relationships with the universe. At a time when philosophers and religious teachers were positions usually secured for men, Gargi was amongst the first few women to shatter this belief. She was one of the navaratnas (nine gems) in the kingdom of Videha, ruled by King Janak.

Gargi is famously remembered for presenting a tough challenge to sage Yajnavalkya with a series of perturbing questions in Brahmayajna (a philosophic congress organized by King Janak.) She was the only scholar who continued questioning Yajnavalkya, even after he silenced many eminent scholars in the gathering.

It was with sheer knowledge and confidence that Gargi commands a special place in Brihadaranyaka Upanishad. This captures her dialogue and debate with Yajnavalkya.

If you ask me about the  person who wore her scars like medals, I would definitely say Draupadi. Her life was never a blissful experience. Born unwanted to her father Drupad, and later tormented by her own relatives, Draupadi lived a life full of thorns. In spite of all the insults and bruises, she held her head high.

Amidst all the criticism, Draupadi is a true epitome of standing tall in the face of adversity who achieve what she wanted. She did not choose to play a timid wife. Instead, she commanded authority in all the critical decisions of the kingdom. It was her firm willpower and determination that made Draupadi play a pivotal role in the most historic stories of India.

It is heart-breaking to see Sita as a helpless woman shown to be at the mercy of men in the society. However, if you look closely, you realise, Sita bore immense courage and self-respect. And that makes as her as important as her husband Ram.

It may be argued that Sita played docile and gave in to the societal pressures too soon. But it was a rare virtue of staying calm and taking hard decisions even when she could have led a comfortable life.

Sita bravely raised both her kids without complaints. She chose her battles wisely and did not hesitate to step back when her purpose was served – a quality every leader should embrace.

It is ironic that Urmila is usually lost in the story of Ramayan. If looked at closely, Urmila displays greater strength and patience than any other woman in the epic story.

When Laxman decides to accompany his brother and sister-in-law in exile, Urmila wants to accompany him too. However, for the greater good, Laxman asks her to stay back and she does. One story says, Urmila accepted to take Laxman’s sleep so that he could stay wide awake for fourteen years. This, later helped him kill Meghnaad, Ravan’s son.

One instantly feels bad for Urmila considering the amount of pain she had to go through. Even during Laxman’s absence, 14 golden years of her life were lost sleeping. But does that make her weak? Does she deserve to be forgotten?

She took some hard decisions for the larger good, which makes her role equally important as others, if not more.

Another unsung hero of Indian mythology, Gandhari is narrowly remembered for her patience, courage and candour. Married to a blind prince, Gandhari chose to remain blindfolded throughout her life. It is debatable if this action was out of empathy for her blind husband or a way to avenge the wrong done to her.

Although Gandhari is often blamed for nor raising her sons ‘right,’ she never minced her words and was known for her straightforwardness. It is also said that she warned her husband about the horrendous outcome of the battle of Kurukshetra. And that she suggested the kingdom be peacefully divided between Kauravas and Pandavas. Unfortunately, this never happened. However, Gandhari did keep up with her righteousness even in the most heart-wrenching situations.

Today, Sati Savitri is a title loosely given to any woman who is seen to be abiding by the patriarchal system. On the contrary, Savitri was nothing like that.

Her fearlessness and rock-solid determination are qualities to draw inspiration from. Despite knowing that the man she chose to marry had a short life-span, she went ahead and took the risk.

Later, when Satyavan (her husband) died and his life was taken away by Yamaraj, Savitri did not give up. She stood confident and did not even hesitate to question the God. With her relentlessness and wit, she could bend the rules and make destiny work in her favour.

Just like Urmila in Ramayan, Hidimbi is the forgotten hero in Mahabharat. This tribal beauty fell in love with Bheem and married him. Despite marrying Hidimbi, Bheem failed to provide her the respect she deserved. However, she stayed strong and took care of their son Ghatotkach, who later fought the battle of Kurukshetra on behalf of Pandavas.

Hidimbi is a true example of immense patience and integrity. She was a woman with high self-respect who chose not to beg for her rights but lived life on her own terms.

Another single mother from Mahabharat, who tirelessly performed her duties with great patience. It is important to remember that Kunti not only raised her own children, but Madri’s kids too. She raised the kids of her husband’s second wife after their death.

Kunti raised her sons with great care, and also accompanied them during the years of exile, always a support pillar for them. The woman was so headstrong that even during a tough phase of Kurukshetra’s battle, she chose to stay with Gandhari instead of with her sons.

Although Kunti never failed to perform her duties. She was smart enough to keep an eye on Shakuni and Kauravas’ malicious plans. Thus, she could strategically groom her sons well, so they become the worthy rulers of Hastinapur. Kunti carried a strong objective and left no stone unturned to achieve it amidst various challenges.

There is a reason Mandodari is remembered with love and respect, despite being Ravana’s wife. Playing against societal expectations, Mandodari did not choose to be a silent spectator of her husband’s misconduct. She stood firm in condemning Ravana’s act and offered him sound advice, despite rejections.

Mandodari kept herself composed even in the most turbulent times, and even after she lost her sons in the battle. In an attempt to bring peace to her kingdom, she continued offering advice to her husband without fearing his wrath. Mandodari is a symbol of wisdom, calm and fearlessness in the toughest of all situations.

Sabari’s life is largely seen as that of a great devotee and an epitome of unwavering faith. However, there is another important lesson that can be drawn from Sabari’s life. Sabari had the clarity of her purpose and while moving ahead on the path of her choice, she did not pay heed to other people’s opinions.

Though born to a low-case family, Sabari was accepted as a disciple by Sage Matanga – against the wishes of several other sages.  Despite her endless wait to meet Ram, Sabari did not lose heart and treated every new day with hope and joy. She did not let her social status or people’s disapproval become a roadblock in achieving her purpose of life.

They might appear meek and docile, but deep inside the women in our Ved and Purans are fierce personalities. These women are simple, yet enigmatic, modest, yet ferocious. And they are supportive, yet vocal.

When Sita, Draupadi, And 3 Other Women From The Epics Tell Their Own Stories

To The Adults Who Shut Us Up: Here’s Why We Are The Sad Generation

Why Do Parents Act Only When They’ve Lost A Daughter To An Abusive Marriage?