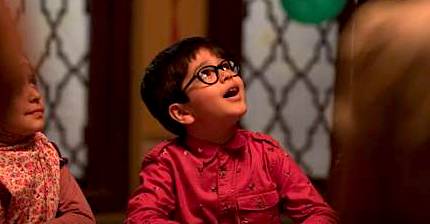 Zee5’s ‘Chintu Ka Birthday’ Leaves Behind The Sweet Aftertaste Of A Homemade Cake!

Set in war-torn Baghdad, ‘Chintu Ka Birthday’ is the sweet story of parents trying to celebrate their child’s birthday despite the war raging right outside.

Chintu Ka Birthday  an AIB production, was originally released at the Jagran Film Festival in October 2019. And it is now being aired as an OTT release on Zee5!

With a minimalist cast that portrays powerhouse performers like Vinay Pathak, Tillotama Shome and Seema Pahwa it leaves behind a beautiful taste. I’d say, one quite similar to the cake to the cake Chintu’s mom and sister made – one that tantalises your senses pleasantly.

It shows you how sweet a family’s love can be

Set in the city of Baghdad, the short film emphasises the ill effects of war, enmity and mass destruction. But what sets this film apart from a conventional war movie is how Chintu’s parents don’t let the repercussions of a war affect his birthday. It is very emotional to see how despite the wreckage right outside their home, the parents trying to normalise it all, because it is their son’s birthday.

The plight of an Indian emigrant family in Baghdad is beautifully etched out through the apt troughs and crests of emotions. With the premise of war and the family’s eventful transfer to the unfortunate place, the film beautifully illustrates it all through Chintu’s diagrammatic excellence.

Chintu’s father Madan Tiwari (played by Vinay Pathak) defies the terror that American troops command, incessant bomb blasts and a sudden power cut to keep his promise to his son. He’s promised Chintu a normal birthday celebration for once and he tries his best to keep his promise. A father’s quest to live up to his child’s innocent expectation and that no strain of uncertainty should touch his children is brilliantly portrayed by Pathak.

The cinematic elegance is beautifully captured within the confines of Chintu’s home in Baghdad. It shows Madan’s journey of giving his son a day of pure unadulterated happiness tinged with the battle to prove his innocence to his mother-in-law. The woman, who once revered and loved him, now has a complete aversion to him since he is shown incapable of bringing the family back home.

The family seems like one you know and can relate to

Madan’s camaraderie with his landlord/friend Mahdi Hassan is beyond words and their conversations will tug at your heart. The emotional connect of the Indian family with a native in a ‘no-man’s land’ is one to look out for!

Madan sees no ill in any person he encounters. Even when he is brutally manhandled by the American troops, in front of his family, he aspires to see the brighter side of life. His decision to surrender to them for someone else’s mistake, just to save his family is an example of his love and concern for them. Even under the most unfavourable situation he pleads for 10 minutes to celebrate his son’s sixth birthday.

Madan deals with every situation with a warm smile on his face. He is a man anyone would want to approach for all their problems as he has a solution to them. His patience, and calm in the most dire circumstances is something one can learn. Meanwhile Sudha, his wife played by the extremely talented Tillotama Shome is a perfect complement to him!

Though Chintu’s is elder sister Lakshmi gets the minimum screen time, her mere presence in the frame adds warmth sibling relationships crave for. Her silent teary outburst when Chintu’s birthday cake gets burnt is something everyone in the audience would relate to. And her restrained performance adds to the film’s cinematic experience.

The movie leaves you with a sweet and warm feeling

The film is aptly named ‘Chintu Ka Birthday’ and he remains the constant fulcrum between all the characters. Chintu is the ray of light in the darkness that shrouds the entire film literally and figuratively.

Though the denouement might seem unconvincing to some, the magic beautifully wound around the film doesn’t die till the end. The struggle of an ordinary family to live simple dreams in a world that is run by greed and hatred is narrated beautifully.

‘Chintu ka Birthday’ leaves you with an everlasting smile and an unforgettable aftertaste. The entire film is shot within the confines of the Tiwari house and at times leaves you wondering what would happen next. And as the film unfolds, it continues to  drives home an important lesson – no matter how tumultuous situations, are there is still some hope. It tells you that humanity makes the world a better place to live in!

What’s The Big Deal About Celebrating Birthdays? A 26-Year Old Expresses Her Opinion

8 Dos And Don’ts For A Successful Kids’ Birthday Party