Bulbbul Is A Film That Takes The Myth Of The ‘Chudail’ And Turns It On Its Head!

Bulbbul is a tale of a woman who has been wronged but unlike the ones who remain suppressed she is out there to avenge her perpetrators, which resonates with many women.

More often than not the notion of feminism is changed, broken, twisted or re-shaped according to the convenience of either men or women. No one tells you or writes about what true feminism is.

The most common dictionary meaning says, feminism is “the belief that women should have the same rights and opportunities as men.” Thus debunking and demystifying some of the conventionally held notions, which if scraped deeper would turn out to be real measures of what is unfortunately termed as “pseudo-feminism”.

Bulbbul a directorial debut by Anvita Dutt Gopalan and a Anushka Sharma production stands as the apt example of what a feminist and a revisionist is all about.

Our society has made us believe that beautiful women are supposed to be dangerous and those who aren’t necessarily subservient to the men who “take care” of them, are even more vicious.

Bulbbul goes on to narrate the story of a starry eyed child bride being married away to a man who is in a position to father her. Her only guardian shown in the film is her ‘Pishima’ or paternal aunt, who teaches her all that the society dictates upon women back in the 19th century.

Little Bulbbul’s query as to why a woman needs to wear a ‘bicchiya’ aka traditional toe rings worn by married women is met with a not so astonishing reply that her aunt gives her, “It prevents women from flying or rather it exercises complete control (‘vash’) on them.”

Aren’t we still living in a society that wishes to exercise ‘control’ over women through the measure of her neck line/hemline if unmarried and vermilion, if married?

Patriarchy was alive then, it is alive now and we don’t think it is going away anywhere anytime soon!

A woman who is wronged

That’s exactly what Bulbbul tells us! The gory crimson palette does complete justice to the raw viciousness that goes on in the manor. However this secret is tucked away in the deepest of corners and that’s how it is expected to be in such palatial houses, quite aptly put in the words of Binodini (Bulbbul’s sister in law), “Badi haveli mein bade raaz hote hain” (Big houses have big secrets) And all you must do is keep quiet.

Bulbbul is a tale of a woman who has been wronged but unlike the ones who remain suppressed she is out there to avenge her perpetrators. And this perhaps resonates with women at large because somewhere we all have been wronged sometime in our lives!

The film shows quaint resemblance to  Tagore’s Chokher Bali in the naming of characters like Binodini and Mahendra. References like ‘Badi-bahu’ remind us of Abrar Alvi’s iconic Sahib, Biwi Aur Ghulam. Bulbbul who aspires to everything that’s labelled as a ‘rebellion’ by the society is very much akin to Satyajit Ray’s Charulata, a woman trapped in domesticity that’s definitely not her real calling.

Amidst all these comparisons Bulbbul, the film retains its originality. The perfect blend of pre-Renaissance Bengal and the present day horror flicks, it is a film worth watching.

Dutt’s portrayal of a blood-thirsty “Chudail, jiske ulte pair hote hain” adds to the eeriness of the film making it a gripping view while it paints a beautiful picture of erstwhile Bengal. With its accurate representation of women adorning themselves in heavy traditional jewellery, thick ‘alta’ (dark red dye used by Bengali women to color their palms and feet) on their feet, palanquins being carried by men who serve the wealthy, zamindars with skeletons in their cupboard and finally a corporeal shape of the ‘Chudail’ or a witch.

Stands up for all wronged women

Bulbbul is a beautiful ode to women in all shades. On one hand we have Binodini, the ‘Choti Bahu’ who leaves no stone unturned to beguile young Bulbbul and that makes her equally guilty as her male counterparts like Mahendra and Indranil and on the other, we have the protagonist who is a firm believer of not only standing up for herself but also for the rest of her tribe.

Bulbbul resurrects from her apparent death and is reincarnated as a true goddess who can go to any gory extent to avenge her perpetrators. And in her endeavors she metes out the same punishment for all- a bloody, spine chilling death! It is interesting to note that Bulbbul’s victims have either wronged her or someone of her tribe- a mentally challenged man who is also her brother in law brutally rapes her before choking her to death; a wife beater, a pedophile, a man who nonchalantly cheats upon his wife and marries another woman in her presence, all meet the same cruel end! For once, we might want to proudly echo the Machiavellian philosophy of end justifies the means!

The fact that Bulbbul not only stands up for herself but for all those women who suffer silently and relentlessly, is the most overwhelming feeling that the audience would derive.

Bulbbul is all that a woman can be; or even all that she aspires to be. The film and the protagonist created by Anvita Dutt Gopalan hits right at the putrid core of patriarchy that’s gnawing at our society since ages. It goes on to question the basic structure of marriage!

Elle Newmark rightly claims, “unrequited love does not die; it’s only beaten down to a secret place where it hides, curled and wounded”. Similarly when a woman’s love for a man is treated with disgust and looked upon as audacious and when her life is bounded by dictums like ‘sharm’ (shame), ‘maryada’ (propriety), ‘sahi’ (right) and ‘galat’ (wrong) you only have to wait for her to rebel. So does our protagonist!

“Kahani poori kaise hogi,” weeps Bulbbul at one point in the film. No, some love stories don’t ever come a full circle. And that makes them all the more beautiful.

Anvita Dutt’s Bulbbul aptly falls in this category. It’s one of those stories that would always remain deeply embedded in the psyche of all women and the men who have the courage to accept such women! 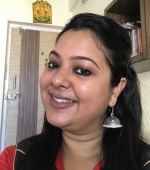