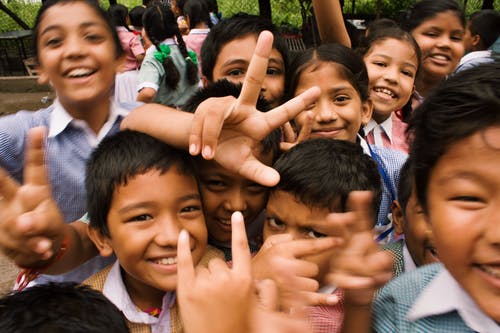 When we begin to isolate people who are different, we only serve to stigmatise their differences more and make them feel worse.

To her pleasant surprise, Naina spotted an empty chair in the first row itself. It was very close to the playground so she got an uninterrupted view of the ongoing activities on the field.

It was my daughter’s first march past

It was her daughter’s first sports day at school. Riya was one among the many children who had been selected for the march past parade. Naina was excited as well as nervous. She couldn’t wait for the performance to begin.

As the commencement for the parade was made over the mike, she saw the teachers asking the children to form a line. Naina quickly pulled out her phone. She wanted to capture the moment forever.

Little Riya was seated in a corner. She saw her friends standing in the line and trotted towards them. One of the teachers stopped her and said, “Beta please go back to your seat.”

Naina frowned. Before she could fathom what was happening, the drums rolled and the parade began. It took her some time to realise that her daughter had been actually excluded from the parade!

My daughter was excluded from the parade

Deeply hurt, Naina felt the injustice of it all. Without giving any heed to the security gaurd’s warning, she marched straight onto the ground and stopped right in front of the principal seated on the dias.

“Excuse me Ma’am! I am Riya’s mother. May I know why my daughter has been excluded from the parade?” Naina asked in a loud voice.

One of the teachers standing nearby heard her and tried to pull her aside. “Mrs. Singh, Riya was not able to perform at the rehearsal. After all she is different from the other kids.”

“So, you decided to carry on without her. Did you atleast give her a chance to learn it ? Or did you think a special needs kid would spoil the performance as well as the reputation of a prestigious school such as yours?” Naina lashed out.

Equality lies in the same opportunities

“Look Mrs. Singh.” The principal now stood up and spoke directly to her, ” Your daughter has autism. And this is not a special school. Yet we agreed to admit your daughter because we believe in equality. But you should also understand that your child has certain limitations.”

Naina was frantically pointing her hand towards Riya, ” Ma’am! Please look over there!”

A visibly irritated principal looked in Riya’s direction and was dumbstruck.

The little girl was no longer sitting in her chair. Her legs rose and fell in perfect synchronisation with the rythymic beat of ‘Left Right Left’.

Naina turned towards the principal and said slowly,

“Ma’am, equality lies in giving the same opportunities to each and every child irrespective of their gender or their abilities. But when you deprive them of this basic right, you not only teach them discrimination but also succeed in breaking their self confidence as you just now did with my daughter.”

Naina decided to leave before she broke down in front of everyone. But she had barely taken a step when a slight movement caught her eyes.

Acceptance is what a differently abled person cares for

With disbelief, she saw the principal walking towards Riya. Holding the child by her hand, she gently led her to the marching troop and slided her between two little girls.

Tears of pride fell down her cheeks as Naina watched her daughter marching confidently along with her peers.

Acceptance is what a special needs/differently abled person craves for. Can we for a moment, forget about their limitations and just treat them as fellow human beings?

After all, empathy is the first step towards equality.

An avid reader and recently a writer . I like to pen down my thoughts and