A meal was equally important for a breastfeeding mother of twins. My battered body started giving me signs, reminding me that “too much of anything is bad.”

Couple of days ago I came across the song ‘I love me’ by Meghan Trainor. With its beautiful music and lyrics, the song tells you what self-love truly is.

I learnt quite late in life the importance of loving myself before others. Earlier I would prioritise other’s happiness, feelings and desires over mine. This went to such a point that I pretty much ruined my own career.

However, the concept of self-love dawned upon me after I became a mother. Motherhood is considered to be the epitome of unconditional and selfless love, especially for your kids. Well, that is the notion practically the whole world has. And that is what I also felt after delivering my twins.

The city of joy, Kolkata, gifted me the best moment of my life, the one where I heard the cries of my twins. A long wait for motherhood finally ended, four years ago and when I least expected it.

And I finally became a mom

On 27 July, 2016, around 11 am, I was crowned a mother. It was the most eventful day of my life. My pregnancy was medically termed a ‘high-risk’ one. And due to this, I was not just under house-arrest, in fact, I was confined only to my room!

Twenty-four hours in one particular room of a house for nine long months is like a punishment for an outgoing girl. By God’s grace and my severe penance, I had healthy twins. A proud mother to a boy and a girl, the whole hospital including my doctor and nurses were jubilant on my twins’ arrival.

At least in my life, happy moments are always accompanied by few hiccups. Though my twins were healthy, my son’s weight was little less according to the medical protocol. And to be on safer side, they shifted him to NICU ward.

As parents, we were relaxed, well aware that the shifting was for precautionary measures nothing more. But, my mother-in-law was quite disheartened for not having a glimpse of her grandson. (The NICU was strictly for parents only)

All it did was increase my love for my kids

This little hiccup also augmented my unconditional love for my kids by several folds. The only thing going in my mind was I have to feed my son as much as possible so that his immunity is not compromised. And so his weight quickly increases.

Forgetting my battered body and stitches that I had for C-sec delivery, I was determined to feed him that very day itself, even though the doctors insisted on doing it the next day. So that evening, around 8 pm, I mustered all courage and tried walking with the help of a nurse.

I had to walk to another floor which was nearly 40-50 steps away from my room, but luckily I had the privilege of using lift and not the steps. Tears were trickling down my cheeks with every step that I took out of pain. And I tried to drag my legs as I could hardly lift them. My feet were drastically swollen after the delivery.

I continued going to my son’s ward frequently and to my daughter’s nursery to the point I hardly had time to have a proper meal. The meal was equally important for a breastfeeding mother of twins. My battered body started giving me signs, reminding me the lines “too much of anything is bad.”

What was she trying to say?

Later that evening, I had severe pain in my abdomen especially around the stitches. A gynaecologist entered my room for the routine check-up. She was a smart woman with short hair who congratulated me with a smile. I could hardly respond with the same enthusiasm, and she quickly responded, “Any problem?”

I said “I have to frequently visit two different wards situated on two different floors, that has caused severe pain in my stitches!”

She smiled at me and asked, ”Have you ever traveled by air?”

To that, she said., “You must have heard the instructions given by air hostess before take-off?” I was still wondering the underlying message that she was trying to give.

What she said changed my life forever

She then uttered the golden words, “You have to wear your own oxygen mask during an emergency before helping others, even before your kids”.

I would be forever thankful to that doctor who gave me one of the most vital lesson of my life. It was crystal clear in my mind that, self-love is not selfishness. In fact, it is an important potion, to your very own existence.

That was the day I started prioritising myself first, whether in my dreams, hobbies, desires or anything that uplifted my spirits. 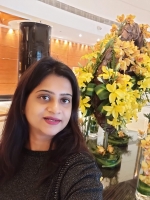 What’s A Bad Mother? We Indian Women Are No Longer Scared Of Such Tags!

Are We Born With An Inner Maternal Instinct?