Rangoli & Babita Spout Communal Hate, But Shouldn’t We Call Out Recklessness Across Religions?

Babita Phogat and Rangoli Chandel spark a Twitter debate with their Islamophobic tweets. Do we need a religious divide too during the pandemic crisis?

Corona virus has gripped the entire world. It is a disease affecting people irrespective of their caste, culture, religion, social status and nationality.

India too is gripped by its terror. Yet the one thing stands out in India about coronavirus. Once again, we have managed to show our discriminatory beliefs even during a pandemic!

As if being xenophobic and racist towards the North Eastern communities was not enough, we have also managed to make the pandemic communal. Above all the main thing, is that our celebrities are also partaking in the spreading of this hatred.

Kangana Ranaut’s sister Rangoli Chandel is not someone famous for her tweets. Recently her Twitter account was blocked by the site thanks to her tweet which, in some ways, was Islamophobic. 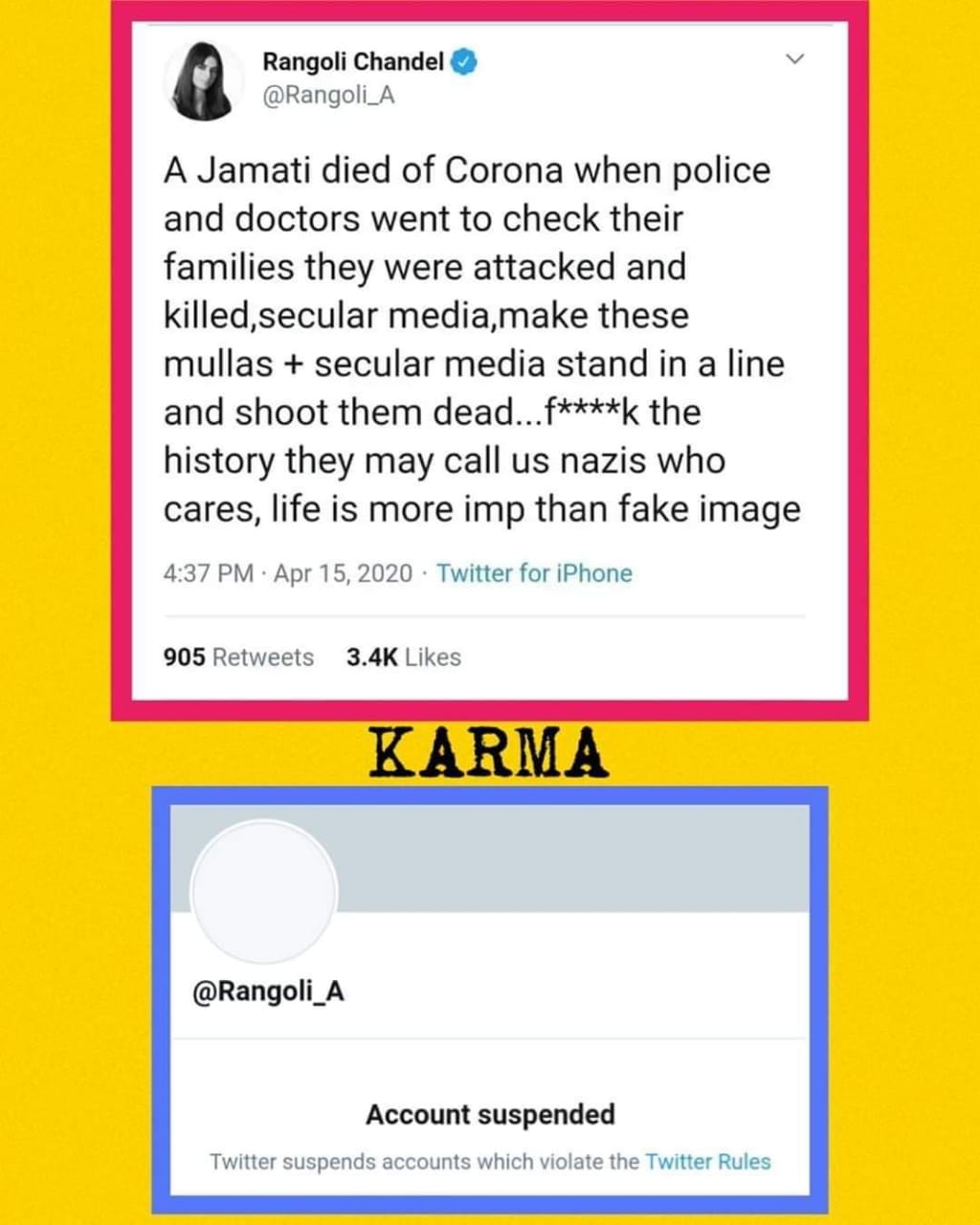 Before you get into understanding why is the world calling tweets by these two celebrities Islamophobic, it’s important to understand the backstory.

What happened in Nizamuddin?

Now the people in the Tablighi Jamaat gathering didn’t inform the authorities about the gathering. They violated rules of social distancing. While the COVID-19 hadn’t been announced an emergency, it was a growing concern. And people should’ve had the sense given that the gathering also had people from all over the world participating in it.

Not just that many people from gathering went back to their home towns disregarded quarantine. So far, a number of them spread the coronavirus to many people.

Just yesterday the Health Ministry confirmed that of the 14,378 coronavirus cases reported so far, 4,291 are linked to the Markaz event. They were even allegedly blamed for spitting on doctors and not behaving properly with the authorities.

Now after this entire incident happened a wave of communal hatred started spreading in the country. Hashtags like ‘CoronaJihad’ ‘Mullas’ ‘Muslimviolence’ ‘JahilJamati’ ‘TablighiVirus’ are trending on Twitter.  And these are accompanied by tweets full of Islamophobia.

It’s not just the tweets. Reports claim that many Muslim businesses are being shut down and people are discriminating against their Muslim neighbours. Several Muslims people are banned from entering certain neighbourhoods in cities across the country.

There were other religious gatherings too

The Tablighi Jamaat gathering is definitely not a smart thing to have happened. However, they aren’t the only group. Other prominent religious places across the country including the Siddhivinayak temple, the Vaishnav Devi shrine, Shirdi’s Sai Baba temple are a few of the temples that were also open around the same time that the Markaz was happening, Outlook India reported.

On March 8, the New Delhi government had already shut down schools and asked people to avoid large gatherings. However, the President of India, Ram Nath Kovind attended an awards ceremony along with hundreds of other people.

On March 25, the entire country was placed under strict curfew. Still, the chief minister of Uttar Pradesh Yogi Adityanath attended a major Hindu celebration at a temple. He later even tweeted about it.

On March 16, the Times of India  reported that Hindu Mahasabha also conducted Gaumutra gatherings that would, according to them, end the pandemic. Recently, Karnataka’s former CM’s son got married while  completely violating rules of social distancing.

Social distancing and mask norms clearly don’t seem to apply to India’s VIPs. This image was taken during the wedding of former Karnataka CM HD Kumaraswamy’s son. We are happy for the couple but this sets a terrible example for the rest of society. pic.twitter.com/P0zrHV7S05

Bengal saw a violation of social gathering for the celebration of Ram Navami, the Economics Times reported. A Sikh fair in Punjab from March 10 to 12 resulted in 40,000 devotees being sent to isolation. According to a report by BBC Asia, as many as 640 people who attended the fair tested positive for COVID-19.

On Thursday, Kalaburagi in Karnataka, at a COVID-19 hotspot, devotees insisted on conducting an annual chariot procession. For which thousands of people gathered at Siddhalingeswara Temple in Revoor village. The Economic Times reported that Kalaburagi police filed an FIR against around 20 identified people. According to the report, as many as 100-150 people attended the procession.

In Chittapur area of Kalaburgi (Karnataka) villagers thronged in hundreds in violation of the lockdown order to conduct the chariot festival in the local temple.
There are 3 Covid-19 related deaths, including the first in India was reported from Kalaburgipic.twitter.com/Xh8xVdTJIs

If this all is not enough, despite the PM asking people to do the thali banging and diya lighting while staying indoors, people still took to streets. A number of them carried out processions chanting things like, “Jai Hind!” and “Go Corona!” Despite the PM’s pleas of staying indoors, this completely violated the point of social distancing.

Why are Rangoli and Babita’s tweets questionable?

Although the media and health ministry has not linked any case to any of these gatherings social distancing was still violated. There might have been cases because of these too. So should #TempleCorona or #HinduCorona also trend? Should Hindus be also flooded with hate comments? The answer is no!

Did the members of the Tablighi Jamaat behave recklessly? Yes. And are they responsible for spreading corona? Yes. Do all of India’s 200 million Muslims bear responsibility for their behaviour? No.

“Muslims in India find themselves, yet again, responsible for something a few people did. We are being asked to ‘explain,’ we are being held responsible. And we have to, yet again, prove our loyalty to the nation. My neighbours look at my family with a cruel eye just because some people from my community are stupid. This treatment is not fair on me,” says a Muslim resident from Hyderabad.

Instances of callousness aren’t restricted to any group or community. Even Christians in South Korea did the same. So blaming an entire community for an act of few is not fair.

And this very fact makes tweets by both Rangoli Chandel and Babita Phogat insensitive and not unfair. Also, they are at a position where they are followed by so many people. Tweeting to support the agenda of making a health crisis a communal crisis is not responsible behaviour. Still breeding discrimination is not something new for celebrities.

Discriminatory comments are not new

For example, famous casting director Sanjay Chauhan once said about actor Nawazuddin Siddiqui. He claimed that they “can’t cast fair and handsome people with Nawaz. It would look so weird.”

In another instance, Rishi Kapoor said that Nawaz doesn’t have the face and talent to be a romantic actor. He said “You (Nawazuddin) haven’t done it (running around trees) in your life; neither will you get a chance to do it. And you aren’t capable of doing it either. You don’t have the image; you don’t have the talent.”

Sonam Kapoor once said, “If you are not good looking they consider you a good actor” propagating the skewed perception of talent in Bollywood.

It’s not just racist comments, celebrities have also made discriminatory comments. In May 2019, Abhijeet Bhattacharya’s verified Twitter account was suspended over offensive posts. He reportedly tweeted sexist and offensive remarks against women and had targeted a female JNU student-activist.

After Section 370 was revoked and a lockdown was announced in Jammu and Kashmir, actor Anupam Kher tweeted ‘Kashmir Solution has begun.’ Drawing criticism for calling mass violence on minorities and curbing freedom of expression a solution.

In the end, we need to understand that it is humans who are reckless not religion. Blaming the entire Muslim community for reckless human behaviour is not fair to the Muslim doctors, municipal workers, police officers and other essential service providers. These are the ones working selflessly during this crisis. Also making a health crisis something of a communal crisis and playing the blame game is the last thing we should do right now.

Editor’s note: An earlier version of the post mentioned that various places such as the Siddhivinayak temple, and the Vaishnav Devi shrine were open during the lockdown. This was an inadvertent error – these places were open at the time that the Markaz happened, rather than the lockdown. This error has been subsequently corrected.

Kangana Is Becoming The Poster Girl For Everything She Stood Against, And That Is Just Sad