Neena Gupta is on a roll! She recently asked a bunch of legit questions about women and farting! Why can men publicly fart or burp but not us?

Neena Gupta is on a roll! She recently asked a bunch of legit questions about women and farting! Why can men publicly fart or burp but not us?

The number of restrictions on women in the patriarchal society we live in are not new at all. Not only politically and socially, these affect women in the way they live as well.

Trying to break these restrictions while asking some legit questions, the über-cool Neena Gupta recently put up a video on Instagram. She begins the video in her blunt and direct way, asking the audiences, “Aurton ko gas nai hoti? Unko badhazmi nai hoti? Unko burps nai aate hain, na?” (Women don’t have digestive problems, do they? They don’t have to burp, do they?)

Very sarcastically, she disregards the mentality of the society that makes women feel uncomfortable burping or farting in public. Both of which as normal and a natural phenomenon. 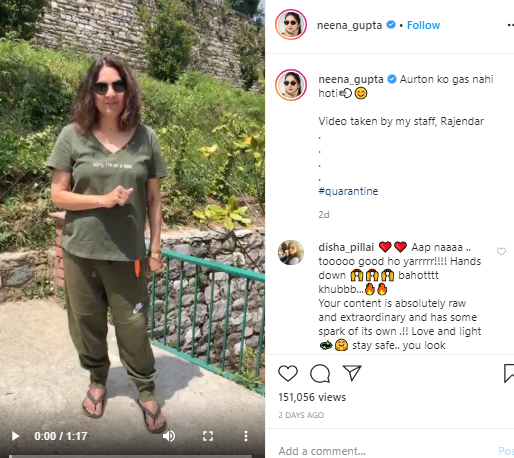 She further goes on to say that in these lockdown times, we tend to eat and lot which may lead to indigestion. Still, she doesn’t understand why it is okay for men to laughingly fart. Yet women are expected to go to a corner and fart quietly and politely.

What’s natural for men is shameful for women?

Now if you ask any woman, she will tell you that Neena Gupta does make a very valid point. From our political perspective, to our choice of clothes we are not as completely free as men are.

It isn’t just the farting, there are other bodily functions that are considered normal for men but shameful for women to do or to talk about. And so, we ask why.

What is wrong in farting and burping?

As Neena Gupta rightly pointed out that how women often go to corners to fart and men do it openly, reflects the mentality of our society. Now generally speaking farting or burping in public irrespective of gender is rude.

Hence, everyone must avoid it. But our society has conditioned farting and burping as a shameful activity. And whatever is shameful cannot be done by women.

Mardon ka kya hai, they are meant to do shameful things. But women can’t because they are always supposed to smile and look pretty!

Also, it’s fine for men to have burping competitions. As if it’s a matter of pride about who can burp the loudest. Although if a woman burps or farts in public, she is looked upon as if she has sinned.

The extent is so huge that there are jokes been made on topics like ‘Women don’t fart.’ We do dumb people, you just don’t see us doing it because the society has conditioned us to conceal this natural activity.

Also because we have this thing called manners. Hence, we don’t fart in public making people suffer and laugh about it proudly.

While sitting properly is a mannerism everyone should follow in public, sadly, only women are especially advised and told to do so. Why? Because we have our vaginas between our legs. And if we open our legs wide and sit comfortably we would look like we are offering our vaginas. Like they were on SALE!

This deeply rooted notion of our society makes women feel that they are at fault that their genitals are between their legs and that they need to be hidden. Also, full clothes aren’t enough to hide the ‘things that need to be hidden’ so let us also make them sit in a particular manner.

Another thing to note is that only women are asked to cross their legs and sit, not men. Because men don’t have their genitals between their legs, do they? Their genitals are on their backs, aren’t they? So let men sit however they want to.

One more thing that our mothers always told us was ‘ladkiyan sabhya hoti hain.’ (women are meant to be graceful) And all that graceful women do is look pretty and smile a little.

If we laugh out loud or snort while we laugh, we are told, ‘Arey! Ye kaise hass rahi ho. Ladkiyaan itna khul ke nai hasti!’ (OMG! Why are you laughing so openly! Women hould shut their mouth and only smile gracefully)

So because of this, we conceal our laughter as well, because the burden of ‘log kya kahenge’ has been taken up only by women!

Running around in public

Despite women having achieved great success in athletics and having won medals, in running in public for women is just not ‘decent.’

Why? Because our body parts move while we run and some men just can’t control the pervert inside them. So, thanks to the mentality of such men, we are asked to not run in public. Now that is hypocrisy served to women as sanskar!

During the lockdown, Neena Gupta makes us ponder- how is it that natural bodily functions are also gendered! She is giving us a wake up call to go ahead and do the most basic things!

So the next time, during or even after the lockdown, if you see a girl burping, farting, laughing or even sitting comfortably, let her be! Be a decent person, and let her live her life, her way!