Quite early that morning Mariam left bed with a heavy head. She folded the quilt and arranged the sheets. Made her cup of tangy lemon tea and strolled in her balcony till she sipped it. Soon she would make breakfast and wake up Ayesha to get her ready for school.

This was an everyday ritual and Ayesha wasn’t much of a difficult child. Things were smooth with her as she made no fuss while getting ready or even getting up early. But Mariam had not been very happy about things around since a few days.

Ayesha was a cute little girl whom everyone liked and talked to. Mariam too accepted the fondness but it made her restless when someone pulled her daughter’s cheeks or kissed her. She didn’t like it at all!

The van in which Ayesha went to school had a conductor who was very sweet to all kids. He would talk sweetly to every little one and would often touch them lovingly.

The conductor was what had been bothering Mariam since a few days. He had been very caring and polite to Ayesha and greeted her everyday with a quick pat on cheek, which Mariam quite didn’t like. The newspapers everyday were flooded with news of child abuse and similar heinous crimes. Mariam’s mind was infected severely with it and all she could think every time was if her child was in safe hands !

Every afternoon only after Ayesha was dropped back home that her mom could feel relieved. She would then help her daughter change and kept asking her about the day. She took every detail and analysed it. On days when Ayesha seemed upset or sad, Mariam’s apprehension reached its heights and she tried to elicit the underlying reasons.

It became very difficult to live with the ticking bomb and so she decided to take some action.

While she was juggling with ideas to solve her problem there was a workshop organised for parents in Ayesha’s school. Mariam had decided to talk to the teacher after the workshop. She sat in there with little hope, but lot of dialogues in her head.

Parents were greeted and the principal was called upon to address the parents. The topic of the workshop said “Good Touch- Bad Touch”. There were a few counselors, doctors and advisors who talked to the gathering. They created a picture of what is a good touch and what is a bad touch, difference between the two and how to identify it. They focussed on how to prepare your child for their own safety and how to equip them better to face the external world.

Mariam was feeling lot better after the workshop. She was so moved that she thanked and congratulated the principal wholehearted. Back home she shared her experience with her husband who was very well aware of Mariam’s concern and was trying to find a solution to.

Talk to your child about good touch and bad touch.
Be open and kind and loving while you talk to them.
Give them Ownership of Their Body. …
Use Appropriate Language while explaining things to them …
Keep the conversation light and simple.
Tell them about the private parts and that nobody except their mom(or grandma etc respective to the case) is allowed to touch it.
Empower them to Say NO and assure them your support.
Don’t force your child to cuddle or kiss someone who she/doesn’t want to.
Use books or posters regarding Good Touch Bad Touch.

Mariam had realised that there is nothing better that she could do except for preparing her kid well.

Let’s spread the awareness. Let’s talk to the little ones. Let’s listen to them. 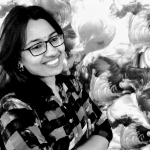 A teacher by profession, I believe that learning never ends.