The story of Aideu Handique is an important one that needs to be told; after all she was the first ever Assamese actress! But that is not the only reason why her tale is so important.

The story of Aideu Handique is an important one that needs to be told; after all she was the first ever Assamese actress! But that is not the only reason why her tale is so important.

When she was only 20 years old, Aideu Handique landed the job of ‘Sati Joymoti’ in the milestone Assamese film Joymoti – but was then ostracised for the rest of her life.

Born into a poor family in Panidihingia, Aideu was just like any other woman of her age at the time. Young and naïve, she had no idea how her life would phase out when the legendary Jyotiprasad Agarwalla approached her for the first Assamese talkie, Joymoti, which released in March 1935.

At the time, women led very restricted lives, and men played male as well as female roles on the stage. Women had no place in that men’s world. So when a young Aideu was approached by Agarwalla for playing the titular role of Joymoti, she did not know what she was getting into.

Joymoti has always been a rebellious character in Assamese society – her sacrifice is taught to every school going child in the state. The story goes that when the region was ruled by Lora Roja or boy king Sulikhpaa, his Prime Minister had ordered all the other princes to be mutilated, so that he could continue keeping his puppet king on the throne.

Gadapani, Joymoti’s husband, and the obvious heir to the throne was thus forced to flee the kingdom. Joymoti was captured by the king’s men, and tortured relentlessly for 14 days while she was pregnant. But she did not budge. She sacrificed herself to the soil and Gadapani returned to become one of the greatest kings of the Ahom dynasty.

Joymoti remains a favourite character in Assamese folklore and culture, a woman courageous enough to die to protect her husband, she is considered a ‘sati’ in the truest sense.

Aideu Handique made a sacrifice of a different kind. Despite the ethos of the times, she agreed to play the role of Joymoti after taking permission from her father – after all, Jyotiprasad Agarwalla was legendary even then! His contribution to the Assamese literary and music world is undeniable; a rebel and a man way ahead of his times, the very act of choosing a woman to publicly play a role in his film was dangerous and bold. But he was Jyotiprasad Agarwalla, he could do it, and he knew he was making history by making the first ever Assamese talkie.

The passive resistance to the oppression depicted in the movie drew parallels to the British regime prevalent at that time. Critics claim that Joymoti can be seen as India’s first ever feminist film, a film symbolising State brutality as well as women’s’ resistance. Handique’s role in the movie, which included a scene where she was gruesomely beaten up, was also nothing short of spectacular. But what happened afterwards was equally hard to believe after she played the role in this feminist movie.

Handique never got married; rather, she never got the chance to get married, since no man wanted to marry a woman who had acted in the public domain. People refused to drink from the same pond as her, and she and her family were ostracised and isolated for life; after all, how dare a woman act in the public domain? How dare she call another man her husband in the film? The irony was unprecedented.

Joymoti was a symbol of bravery, but the woman who played her role, a 20 year old woman, was doomed to spend her life in solitude and obscurity!

Today, almost 85 years later, women can act in films; I am not very sure how far they can continue their career after marriage though. The gender pay gap in the film industry is still a reality. Cases of sexual harassment and the advent of the #MeToo Movement in the industry are natural, given the unbalanced power relation in the industry. Twitter remains toxic for women celebrities; it has become easier to harass a woman with a voice on social media.

Joymoti continues to be celebrated in Assam, as she should be. The Government of Assam gives the Sati Joymoti Award every year to women who have excelled in their careers. I wonder when is the time to remember the lady who brought Joymoti to life on screen, I wonder when our schools will also tell us about Aideu Handique when they teach us about Joymoti!

Image from a short film, A tribute to Aideu Handique 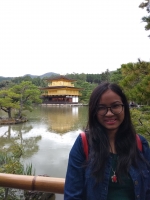