All year long, women, especially in India, face a lot of discrimination- often fatal too. Is merely celebrating Women’s Day enough or can we do more?

If you Google important dates in March, the Internet will show you a list of national and international days of significance. At the top of this list is March 1, the day observed by UNAIDS as ‘Zero Discrimination Day.’

Post this the most popularly celebrated day is International Women’s Day- a tribute to women all across the world. Combine these two days, and what do we get? A broader perspective!

What is Zero Discrimination Day?

First celebrated in 2014, March 1 is observed as ‘Zero Discrimination’ day to raise a voice against any/all forms of discrimination. And also to celebrate every human’s right to live a life of dignity irrespective of their caste, religion, gender, sexual preference, colour, nationality, race, ethnicity or disability. On 1 March, all over the world, people hold events, join marches and create a sense of awareness to bring about a change.

This year, UNAIDS challenged the discrimination against women and girls. In most developing countries, particularly in India, women are regarded as second class citizens. They are forced to take a back seat where matters of pivotal importance are concerned.

We have awe inspiring women like Chimamanda Adichie, Oprah Winfrey, Yusuf Malala, Michelle Obama, who have created history. Their stories inspire. And their struggles are revolutionary. Yet, even today, the girl child is looked down upon in our country. She is discriminated against, manhandled, physically, emotionally, and mentally subjected to so much manipulation and abuse.

Five Indian scenarios where Zero Discrimination 2020 needs to be applied with immediate effect:

Betrayal even before birth

The PCPNDT (Pre-Conception and Pre-Natal Diagnostic Techniques) Act was passed by the Indian Government in 1994. However, this hasn’t stopped medical malpractitioners from revealing the gender of the child, and consequently carrying out terminations of the female foetus.

Approximately 1.5 crore girls have gone ‘missing’ from the nation’s population since 1990. This is attributed to prenatal sex detection and selection.

Over 35 percent women in our country are still illiterate. This is because the girl child is often deprived of her right to education. It is a known fact that boys are often preferred over girls in Indian families.

While it is the ‘ghar ka chirag’ who inadvertently receives a good education, his sister (often considered as ‘paraya dhan’) is kept back to tend to the household chores. Thus, the girl child is exposed to discrimination once again, making her feel it is quite ‘normal’ to be treated as an inferior.

Betrayal by the community

This practice of female genital mutilation is still prevalent in the Dawoodi Bohra community in India. There have been several campaigns conducted against this inhuman practice.

‘Khatna’ or FGM is not mentioned in any religious text. But is still conducted with the sole purpose of subjugating women and controlling their behaviour.

Betrayal and exclusion by society

Recently a minister passed a preposterous comment, “If a woman cooks for her husband while menstruating, she will end up becoming a Kutri (dog) in her next birth.”

Menstruating women are not allowed in temples, young girls in hostels are being inspected before they are allowed a meal in the hostel mess. Women of the child bearing age are barred from auspicious functions and places of religious worship.

Those in rural areas are made to camp in isolated huts at the outskirts of the village during those days of the month. In a country, where the Goddess is venerated with pomp and splendour, it is disheartening to see the shame, stigma, and discrimination our daughters have to face for a phenomenon that is purely biological.

Betrayal from one family to another

In rural India, girls are still considered a burden to the family. Right from brith, her parents saving money for dowry. Although the legal age of marriage is assigned as 18 years by the Indian Government, one in three of the world’s child brides are from India.

Happening mostly among the uneducated and educated illiterates in society, the nomenclature of dowry has been modified to a convenient ‘Aashirwaad’ (blessing) nowadays. This blessing is expected in cash or kind from the girls parents or sometimes paid in instalments by the bride herself (from her monthly pay cheque) until death or divorce… whichever comes sooner.

Betrayal at the work-place

Women are constantly reminded of their vulnerabilities, everywhere, even at the job front. Gender discrimination raises its ugly head at some of the top positions in some of the top organisations.

I recall Indra Noori mention in an interview how her mother casually told her to go and fetch milk from the milk booth soon after she broke the news of her turning CEO of Pepsi. To her mother, her achievement was no big deal. What mattered more was that Indra did her daily duties.

I recall there was a smattering of applause from the audience as proud Indra blushed at the memory. And that is exactly where the issue lies. We have gotten comfortable with the demands made to us by a gender stereotyped society.

This complacency is the precise reason for the poor representation of women in politics, sports, army (woman aren’t allowed in combat units) They are paid less than their male counterparts despite their work experience and efficiency.

Betrayal by a collective mentality

The Indian film industry is partly responsible for the Pavlovian experiment it has been stealthily conducting on the cinema going junta (which is almost 90% of the Indian population).

We have films showing coy, dutiful, women decked in finery cooking, cleaning, raising perfect kids, and fasting for the long lives of their chauvinistic husbands. And then we have the bold, career oriented women characters often playing the seductress or the other woman preying on the poor husbands.

We have all forgiving wives, trophy girlfriends, over-glorified marriages, and the idea of an ever green love sold to us. Hence, whenever in reality, a relationship sours, love putrefies, or any other stereotype is at a risk of crumbling, we begin to believe what has been fed to us by all the Rajashree productions and Suraj Barjatiya films– ‘it must be the woman!’

Why is it ‘always the woman?’

Being made the scapegoat in so many circumstances, it is natural for the woman in question to spiral into self-doubt, distress, and depression. Add to that emotional manipulation and gas lighting. Thus begins the story of another bias, another stigma, another area of discrimination—mental illness.

If we think of all these harrowing experiences that women in our country have to endure, having one day to celebrate womanhood seems like a sham. How fair is it to celebrate and be celebrated on one measly day when we are made experience humiliation and substandard treatment all throughout the rest of the year? Aren’t we selling ourselves too short?

This year, stop and reflect on all those times you took yourselves for granted. Going with the theme, it is time every woman makes a conscious effort to raise a voice against the first act of discrimination she comes across. Ignore the voices that call you a ‘feminazi’- they only intend pulling you down.

So go right ahead. Support your tribe! And don’t you forget yourself first. The next time someone tells you that you cannot, show them that you can.

In the astute words of Maya Angelou, “Each times a woman stands up for herself, without knowing it possibly, without claiming it, she stands up for all women.” 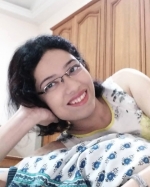 A doctor and writer bundled up as one, Priyanka lives and loves to challenge the

What Is The Point Of Celebrating Women’s Day?