The “Aunty” moniker may have ticked off Actor Swara Bhasker recently, but if you imagine that Aunties are a boring lot, you need to do a big rethink.

What have you done Swara sweetheart? Really, what else is a 4-year-old supposed to call you? “Didi?” That’s patented by the way and firmly taken for good by the Bengali dame.

Then there’s “amma” – that too is kind of “off the shelf” – not that you were interested anyways. So that leaves you with just one choice: the all-encompassing “Aunty” – that’s quite free-floating, age-neutral and well, if you own it (like I do) extremely ‘liberating’.

And no it’s not because I am in my 40s already (ha, ha very funny!) It’s because I won’t let any ‘label’ pull me down, whatever the connotation. That’s what I decided ages ago when I was 25, just married and my neighbour’s 6-year-old daughter asked me, “Gunjan Aunty, can I please play with you?”

“Of course, darling!” – I blurted out with a smile after the initial shock; yes, I agree the first time’s a shock, but once again, what is a 6-yr-old supposed to call you?

Now to those who think ‘Aunty’ is the end of the world, I dedicate this ‘from the heart’ list of Four Fantasies of a 40-year-old Aunty! Me. I am 40 plus for the record, but I’ll milk 40 for all it’s worth till I dive deep into the 50s. Talking of the 50s, that’s also 40 plus technically (wink!)

Squirm alert: If you’re queasy talking or listening about fantasies (especially of a much-married Aunty) please go back to chanting, because I am gonna be ‘Auntying’ big time. If you’re one of those who can’t digest the fact that a 40-year-old can fantasise – isn’t she too old bro? Or really lust on her mind at that age? Or hasn’t she menopaused or something? – you’ve got some growing up to do kiddo, so go drink up that cup of Bournvita or something with a choco chip cookie – know what I mean?

You sweetie, have no idea what 40 is all about! It’s what I call class meets clever meet clear meets carefree! Capisce?

Swooping right in then…

I am going to start with a bit of a mental foreplay and then gradually (like we women like it, are you listening dude?) move into the real deal. Fasten your seat belts, you. Aunty’s ready to slay some.

Okay, so I am just back from my morning walk listening to my favourites on Spotify. It’s one hell of an eclectic list from the sober strains of Nusrat Fateh Ali to the raunchy rhythms of Taki Taki to many mellifluous melodies in between.

The scene at 6:30 pm is one of peace and tranquillity. Yoga happening, people meditating, a brisk jog here, a kapalbhati there, and then there’s Gunjan Aunty. Outward it’s all good, calm, decent shorts and tee in place, suitable non-body-hugging – but inside, ohemmgee, full-on music just gets my soul going and I am totally ‘item-numbering’ to Nagin-Nagin!

Yup the hardcore shaadi fav. Cheap song if you insist. The song that literally a few days ago ‘broke’ a marriage in Saharanpur. “The groom’s wish to perform the nagin dance at his wedding proved to be too costly for him as the bride called off the wedding just before rituals were to begin after witnessing his performance.” I hear you Anubhav Mishra! Seriously Priyanka Tripathi – it was just plain heart-felt happiness. I would have done the same. Some people just cannot resist the beat.

There I said it – that’s been my long-standing fantasy – judge me, label me, cuss away – I don’t care! In fact, I got to partly live out this one at 5:30 am inside the IIT Bombay campus can you believe it? At the annual IIT half marathon. In what could only be described as a Zumba meets flash dance session I danced my heart out to the gorgeous Yana Gupta’s Babuji, followed by Kamariya and Punjabi pop.

Like old buddies from school we’d set the rustic table for a ’30-minute meal’ with friends, totally in sync dicing, chopping, tasting, frying, roasting – a glass of wine in hand, the appetizing smell of butter, garlic and that hint of rosemary and pepper floating in the air.

It’s my dream, culminating in me totally flooring my buddies Gor-Ja with some melt-in-the-mouth lightly-flavoured-gajar ka halwa and creamy paneer makhni – English, Scottish, Indian accents floating all over. Just WOW! (I’ve already perfected an under 30 minutes version of both – you know just in case Gor-Ja come calling!)

I’ve got 2 tattoos, and I’ve already planned the 3rd and 4th ones. It takes some doing guys. None of that teenage-y flittery butterfly for me or the Millennial “love you to the moon and back boyfriend’s name.” Bah! But the fantasy tattoo is the 5th one – all thought up but needs mega guts to stamp on for eternity.

Aunty Gunjan would love to have a necklace-like tattoo centered aesthetically near the cleavage that goes in bold black: BuriNazar Wale, Tera Mooh Kala! Yes, like the truck logo. I just love it and this would also be a statement piece! How cool would that be. No time soon though, but I very often fantasise about it.

The shameless stare of the ogling onlooker… and then the shock, I get this urge to end it with one of them colloquial cuss words that have men squirming… but that’s on hold, even in the fantasy for now. Don’t know about my crazy quotient in the 50s though.

The last guys, is the true-blue fantasy, how fantasies should be. Fantasies without a wee bit of lust would be like SRK without his dimples or crisp onion bhaaji without tangy hari chutney. Nocharm.

#4 for you people, I sometimes fantasize about escaping from the grime and grind of life on a solo Italian holiday, where I meet the most beautifully accented Italian charmer and basically have a holiday of a lifetime with him in tow. Why Italy? I don’t know, that place has a hugely romantic feel to it or maybe because I just saw a re-run of When in Rome on Netflix, drooling over Josh Duhamel! Or maybe I am still in love with the fish-lugging-choking on his gol-gappas Marco Canadea in Queen. I don’t know.

I mean, can you imagine looks good and cooks good? To top it all, in my fantasy it’s totally taken for granted that the absolutely smashing Italian dude can serenade and salsa in his all black outfit, his tattooed arms strumming the guitar soulfully as the lapis-lazuli cross around his neck sways in rhythm. Isn’t that some scene I’ve dreamed up guys? I am not going to get crude or anything, but romance is definitely in the air. Why not?

You, in the meantime, can go on and dream up the rest of it, or better still, imagine fantasies of your own. I’ve definitely got mine all sorted, for “we need fantasy not to escape, but survive in the reality!” Don’t you agree? 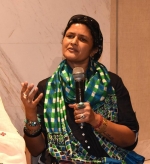 The League Of Ordinary Women

Those Nosy Uncles & Aunties We Call Out Can Often Be Our Own Parents, But What’s Behind That?