The norm is that a woman does not have a claim over her father/mother’s property because "she gets to enjoy her husband’s property, and well the family has already spent on her wedding!"

The norm is that a woman does not have a claim over her father/mother’s property because “she gets to enjoy her husband’s property, and well the family has already spent on her wedding!”

The fourth winner of our July 2019 Muse of the Month contest is Prachi Patil.

It was early Monday afternoon, when my aunt came to visit us at our home after dropping her daughter to school.

Having cooked lunch and dropped her daughter to school, early afternoons are mini windows of respite for her when she can do her thing- marketing, visiting friends and relatives. Most of the visits we pay each other have a routine to them, they are had with hot chai accompanied with some vada pav or bambaiya sandwiches.

In the absence of little cousins, uncles and fathers, these conversations become spaces for exchanging information about what’s going on in our family and extended family. The conversations sail from one shore to another, and today the ships docked at familial property.

Aunty was telling us about her maternal farm lands which would soon be taken by the government for a road development project. The money in return for the acquired land is estimated to run in crores. The government would directly transfer money into the bank accounts of those whose names are mentioned in the land deed.

“So if a family has a plot of land worth fifty lakhs, and has five claimants then, ten lakhs each will be automatically divided and transferred to the accounts of each of the claimants. There’s no need to beg or ask for your share to the eldest brother or anyone,” explained my aunt.

She then revealed that her name is registered on two of the familial lands, which are about to be acquired by the government. She would be receiving two lakhs for one of the smaller plots co-owned by her six brothers and sisters, including her cousins.

“But I am going to return the money to my cousin brother or sister, cause it belongs to my uncle” she immediately added. I asked her why then was her name in the land deed, if it didn’t belong to her. “They just put it in,” she shrugged.

“That doesn’t make sense. It legally belongs to you and therefore your name is in the deed, don’t return the money!” I argued further.

She then went on to say how this money would create a rift between her and her cousin brother. The norm is that a woman does not have a claim over her father/mother’s property because “she gets to enjoy her husband’s property, and well the family has already spent on her wedding! The woman, even if lawful heiress, is expected to forfeit the property/money to her brother.”

My interest in the narrative lies in how through societal pressure women are convinced to accept that they are not entitled to the family property and that it belongs to the brothers. Anecdotes become instrumental in espousing this belief.

“They will curse me”

My efforts at showing my aunt how the money she would be getting would be her lawful share of the property were making sense to her, but her convictions that by moral standards it would be dishonest to take the money remained unchanged. She insisted that if she takes the money it will not just make bitter her relationship with her cousin, but he and his family would curse her enough to cause severe harm to her.

She went on to narrate a tale. In her friend’s village two sisters had sold off their share of familial property, which should have gone to their brothers. The brothers and their wives cursed the sisters day and night. Other kin were also angered by the ‘greed and audacity’ of the sisters. The sisters finally had to pay the price for their greed; today both of them old and haggard, suffer from critical health issues with no one to look after them. Had they not been selfish, their brothers would have cared for them.

“This kind of dishonest and cursed money is never good for anyone,” justified my aunt.

I pointed out to her that brothers swoon with love and pride on Raksha Bandhan and Bhai Duj but also readily become sworn enemies of their sisters if they speak about money.

“Cunning” sisters “paid for their greed”

Aunt then narrated another incident she had heard, where a brother received sixty-five lakhs after selling off the farmland and willingly gave two lakhs each to his three sisters. But the “cunning” sisters and their husbands filed a case against the brother and got six lakhs each. These sisters too had to pay for their greed, said my aunt, they were not allowed to attend their father’s funeral.

“Who wants such money?” she added. Therefore my aunt wouldn’t be taking any of that money. Her own brother would also be getting money after their familial land is sold, but even then she will not ask for the money. She will accept whatever he gives her. She doesn’t want that kind of cursed luck for herself.

What remains wrapped under these narratives is that if women speak up for their right to inheritance, it would be at the cost of relationships going bitter. And women who are ready to sour their relationships with their own bloodline for money are considered morally corrupt and eventually have to pay the price for “dishonestly” impinging their brother’s share. Those sisters who demand their share of property are demonised through these anecdotal narratives, which hail the image of the normative sister. What remains unstated is the fact that if women ask for their share of property, they will lose whatever little support system they have outside their marriage. Few women are likely to take this risk in a patriarchal society like ours, where domestic abuse of women in their marital homes is common. By loosing her natal support system, the woman also will stand to lose her negotiating power at her marital home if things go wrong at any point in life.

These anecdotes safeguard the patriarchal rights over property. In a sense, these anecdotes are acts of resistance against what the law and government want to set right. This state of affairs makes me desperately want to hope that one-day women do become “corrupted by money” and “shamelessly” ask for their share of the property. 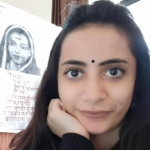