I Live With My Love But I Lost My Lover

Reading his letter for the fifth time, I could feel him, trying to touch my hand. I could feel, the warmth of his breath, trying to coerce into mine. I could feel him, sitting with me, looking down on me full of love and life. I could see in his eyes, the reason for my being. The only reason for my being was to love and to be loved by him. No matter what happens now and we are inseparable, for this was the time for which we live and die. Nothing in this world snatch this moment from me for I could die several times for being in this moment.

Tears flowing continuously remain unproven to be the barriers to the extreme flow of emotions my heart was witnessing. I wanted to read my beloved’s letter again and again for it was the one he had written to me after so long years. It was the one he had written only for me and only with love. He has expressed his silent emotion after many seasons had passed. My drowned eyes tried to figure out the hazy letters of the letter, as this line of him had touched my heart deeply and has become unison with me.

I read his line again,” I wish I could turn back the clock and bring the wheels of time to a stop.”

We both knew the golden time that we spent together was during our job training period, before getting married. I felt time waits for none. For, it is a sweet memoir but a cruel ruler. He rules our world and those who befits him are the lucky ones but the ones like us, who are ignorant about the facts of life are left with no other option but to lament and wish for impossible things.

Reminiscing about our golden days, I remembered, the day he expressed his feelings for me. It all started with our job training. It was a year-long training meant to build good and technically strong engineering executives. We were a batch of around 30 trainees at Nagpur Institute. Everyone was quite joyous on being selected. There were a total of four girls in the batch. And I believe the boys were attention seekers for, from classroom time table preparation to running the mess, they were everywhere. Anyways, I was happy for another reason. My home was not far from the training institute and my parents often visited me at the hostel. After around a month, during our power plant class, my friend sitting next to me told, “Hey Avni, look at that boy he looks so silent and simple.” I struggled to look as he was sitting on the corner side. I saw him. He had a charming face. He was cleanly shaven. His leather strap watch gleamed on his smooth arms. A medium built wearing a brown check shirt and cream-coloured trousers, he looked really smart. But the smartness was not showy, it was inbuilt.

He was the one whom you feel like talking to, being a friend to. I don’t know why but I really started noticing him all the time after then. My eyes would always look for him in the class and I felt really sad when he used to bunk some classes. One day during the break he was sitting alone. I accosted him and asked his name. He said quite slowly, Pulkit Verma. We exchanged smiles and he gave me his number. I called him in the evening and had a simple talk and with this, our friendship started.

There was his friend and roommate Amit, who also became my good friend. So we three started hanging out together. Sometimes near the class or sometimes in the nearby juice shop. Slowly our friendship became deeper. We started caring for each other. One day at the juice shop Amit said, I guess there is something cooking between you guys and I believe its love. Hearing this, Pulkit and I burst into laughter for we felt nothing such.

But slowly we started realizing that Amit was correct. I now started avoiding Pulkit for reasons unknown to me. We started behaving quite abnormal and freaky when together. The whole class now actually knew our emotions except each other or maybe we didn’t want to admit. And then one-day Pulkit and I were walking after dinner. It was all silence between us for the mind was occupied with ifs and buts, what or not. We walked without saying any words, though the emotions were pouring high through eyes. With the silence intact Pulkit came to drop me near my hostel. We bid goodbye and turned towards our hostels. Then after I had walked a few steps to my hostel Pulkit came back. I surprisingly asked what has happened. I could see the love in his eyes.

He asked, “Have you heard Udit Narayan’s new album?”

I said WHAT. He said, No, I really love you. I could have jumped into his arms for his love or maybe my heart would bounce out but neither did happen for one being natural bondage the other being societal one.

After that day we started being together almost all the time. I stayed in a girls hostel which was around 300 m far from boys hostel. We were either together in the nearby garden or busy talking on the phone. We used to talk a lot till late nights. Our love was blooming uncontrolled. Being with each other, holding hands, sitting on the bench, discussing anything from morning till evening. We were all into each other.

Time passed so fast and then one day our training ended.

It was difficult for us to think of different location postings as the glory of love was at its peak. The slightest thought of separation choked our throat, with heart running fast stopping the breath. After many attempts, we managed to get the same posting place and were happy again. We also told our parents about our future plans with each other and they too agreed for our marriage easily. Our marriage was very tiring like all other Hindu marriages, but the best part was we were now together. Together for always. It felt so content within to be with your love.

Soon we shifted to our home and were extremely happy. The days passed but I felt something missing. The regulations you fall into or the standard procedures you have to obey as a married woman are momentously strange. I really got perplexed of when to behave like a wife, as a daughter-in-law and then of course as a professional. It was hard for me to balance these facets as probably I had really not thought of it, and hence was not prepared of it. I wanted everything to be the same as before and liberal. While Pulkit had a different impression. He suddenly became quite mature. He expected all that can be out of a good wife. Now, I think we two were mad of trying to fit in the moulds of a husband and girlfriend. It was stupid and unwanted.

Once, we went to a family get-together where everyone was introducing his wife and family to all. A couple came and the husband introduced his wife as, ‘She is my life, Anjali’.  Then Pulkit came and introduced me as,’ She is my patni, Avni’. I was only a patni for him now. Truly said but yes it was irking. And then soon we realized that love is never enough for leading a happy married life. It needs a lot of understanding and maturity and we lagged totally on those grounds. For the first two-three years, it was difficult to understand, what was happening. I became a mother the next year of our marriage. I used to go to my office, feed child, stay with in-laws managing house chores. Life has unloaded a new chapter of which I was unaware. Time passed by and love too. It was more important to perform all tasks meticulously now, except loving each other. I was being judged as a good manager who can manage husband, child, relations, home and self. That was a really difficult time. But then time God waits for none.

Amidst all quarrels and judgments, we all grew. Me, my husband, my child and probably our ageing maturity. The arguments have taken different shapes now. They were more of personal beliefs and opinions. Anyhow, they all amounted to one big dissatisfaction for each other. We soon understood that our personalities were 180 degrees apart. I now endorse the saying, “Love is blind.”

And shall add love is treacherous. For it makes you behave like a drunken soldier, who considers the fence side enemy his best friend to discuss his feelings with.

Arguing, then understanding, a short span of loving and then again arguing remained the course of life for some more years. The memorable part was the love between two fights, which always remained the best. Earlier we used to feel special, our couple chemistry was different. But it won’t take much time to gulp that all couples are the same. And have all subjects between then except chemistry.

However now, I believe that love is a feeling which blossoms with a cumulative growth mutually, once you water it, as the seeds once sown always remain there. I remember once Pulkit went for an office tour and came back after a week. I longed everyday and night for him. The day he came back was a celebration within. I hugged him tightly and wanted to move deep and hide inside him.

Days passed by and one-day Pulkit was transferred to another location. We decided that he shall join the office and then try for transfer back to this place as our daughter was studying and her studies could not be disturbed. It is almost three years now and we are still trying for his transfer.

I realized the importance of love in life quite late. I really repent of wasting our precious years.

Image is a still from the movie Chalte Chalte 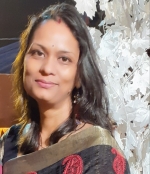 Senior working professional in a reputed firm.Live,love and let live,my philosophy of

Maybe Someday We Will [#ShortStory]

This Is What I learnt On My 23rd Birthday