A Policeman Killed His Colleague For Refusing To Marry Him (And We Still Glorify Toxic Male Heroes?)

A policewoman Soumya was hacked and set on fire by a spurned man who wanted her to marry him. Not really surprising that men think this way, right?

A policewoman Soumya was hacked and set on fire by a spurned man who wanted her to marry him. Not really surprising that men think this way, right?

“To love and to be loved is the greatest joy on earth”. Gone are the meaning of those mighty words where humans considered that to be loved is the most beautiful thing on earth. The incidents around us insist human to stay very far away from love or either cover up oneself with thicker veils so that no trace of love fall on

With the last love refusal victim Soumya hailing from Alapuzha, Kerala, being set ablaze by a colleague itself for refusing his marriage proposal, it is becoming deadly dangerous to get loved by someone.

Soumya , a civil police officer , married and a mother of three children, was brutally hacked by a weapon and then was set on fire by a colleague a few days ago. The attacker too sustained with 40 percent burns.

This is not just a random occurrence now. A few months ago, two cases were reported where women are being burned to death for denying the love proposals.

Less than two months ago an engineering student from Thrissur was set ablaze in her home by a stalker and in March another girl from Thiruvalla was also driven to death in similar manner that too in a public road at noon hours.

In the recent case of the police officer, the issue seems to have infiltrated the guardians of law and order – the victim and the perpetrator both being from the police force. It is clear now that, no section of society is safe from this deadly phase of love.

The most thought provoking matter is what psychological dilemma is leading the youth to take such deadly mode. An analysis is needed on what is instigating our youth to go to such deadly levels for love. 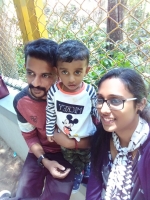 A journalist by profession... A free soul, walking behind my own dreams read more...