Wouldn't you love to know the secret mantra for success if you could ask these extraordinary Indian women leaders in business? Here goes!

Wouldn’t you love to know the secret mantra for success if you could ask these extraordinary Indian women leaders in business? Here goes!

For the past few decades, strong women have been emerging from every sphere of life. They are breaking stereotypes, and have been impeccable at their professional life. They have been a great inspiration for many.

Behind such prowess and dedication, there certainly lie some secrets that make them who they are today, some of these women have gone all the way up breaking the societal glass ceiling.

“I really believe that entrepreneurship is about being able to face failure, manage failure and succeed after failing.” The managing director of Biocon Limited,  Kiran Mazumdar-Shaw is an not just a entrepreneur but is also a true inspiration. Apart from this she is also the chairperson of Indian Institute of Management Bangalore. Now that’s what we call multitasking!

Her words are as aspiring as her actions. You can also get inspired by listening to India’s Biotech queen here.

“I am a people person. So whenever I engage, whether it’s a client or my own team, for me it’s not just about the work or task at hand. It is about knowing the person and what drives him.” 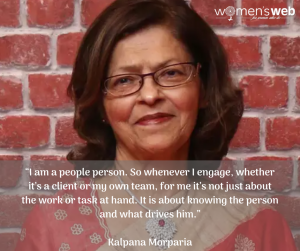 People generally admire hard-work and commitment, Kalpana Morparia is the person who has been there and done that. She is an Indian banker who has been associated with ICICI Bank for thirty three years (now that’s dedication). Presently she is the Chief Executive Officer of the South & South East Asia office of JP Morgan India. Apart from being an inspiration through her works she also talks and works towards empowering fellow women.

At the recent CEO Roundtable, hosted by The Economic Times in Mumbai, she said that in part her success can be attributed to her go-getter attitude.

You can listen to her inspiring words here.

“If you don’t give people a chance to fail, you won’t innovate, if you want be an innovative company allow people to make mistakes.” 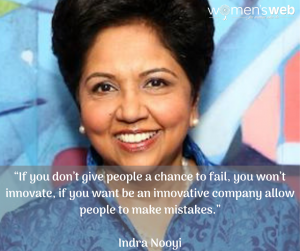 Indra Nooyi is someone who doesn’t need an introduction because her work speaks for her. She has been in Pepsico for 24 years and she recently stepped down from her 12 year old CEO position. She has been consistently ranked among the world’s 100 most powerful women. In 2014, she was ranked at number 13 on the Forbes list of The World’s 100 Most Powerful Women. She has been a rightful global and corporate icon for women in India.

Know the secret behind her success here in this inspiring speech.

“I never rest on my laurels. I always look for new frontiers to cross and new mountains to climb.” Shahnaz Husain is the lady who has changed the world of beauty. She is the founder, chairperson & managing director of The Shahnaz Husain Group The beauty ‘guru’ of India has received international acclaim for pioneering the herbal beauty care movement, and taking the Indian herbal heritage of Ayurveda worldwide.

You can read her empowering journey here. 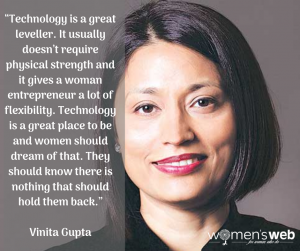 The infectious enthusiasm of Lupin CEO’s Vinita Gupta has taken the third-largest Indian drug company to a new level. Today, it is the only Asian company to figure in the list of top 10 largest and fastest-growing companies in the US.

Vinita Gupta is a Silicon Valley Entrepreneur and was the first Indian-American women to take her company public. She has won several National titles in bridge. She is not just the ‘pioneer lady’ but also a person who works for the greater good. She is a critical observer of how we raise girls so they become confident dreamers, and aspire to reach their full potential.

Here are her thoughts about women in leadership

“With technology and the drive to innovate all the time; the space is so dynamic that you are only as good as your next idea. You need to be agile and thinking on your feet.” 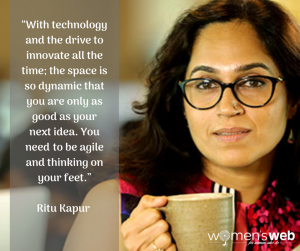 The ‘media lady’ of India, Ritu Kapur is full inspiration goals for any journalist out there. She is an Indian media entrepreneur, the co-founder and CEO of Quintillion Media, which jointly owns BloombergQuint with Bloomberg L.P. She is the co-founder of a web-based digital news site The Quint. Apart from this she was one of the founding members of Network18.

She is also a pioneer and trendsetter She is credited with creating ‘The India Show’, India’s first home-grown show on a satellite channel, Star Plus. In 1995 she started directing and writing screenplays for television show, Bhanwar, recreating landmark cases in Indian legal history. She is a true inspiration for all the women trying to set up a career in the field of mass media.

Here are her views about technology and innovation.

“Hard work and going the extra mile is important, without which you can’t be successful. Having the dream is easy. Making it come true is hard.” 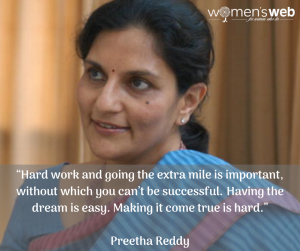 Women entrepreneurs in India are diverse, and spread into many fields. Dr Preetha Reddy is one of these. She is not only the managing director of Apollo Hospitals but also one of the pioneer businesswomen in India’s healthcare industry.

Dr Preetha Reddy is responsible for the operations of the Apollo Hospitals group and works closely with healthcare practitioners at Apollo Hospitals to come up with contemporary protocols and raise the bar on clinical outcomes. For her outstanding work and contribution to the healthcare sector, she has been ranked in the international list of  ’50 Most Powerful Women in Business’ compiled by Fortune and in the list of ‘The Most Powerful Women in Business’ compiled by Fortune India. She has also been awarded the Life Time Achievement Award from the Loyola Forum for Historical Research for her foresight and contribution to the fields of healthcare and social science.

Listen to her inspiring words here.

“Leadership, for me, is investing in the people you hope to lead, supporting them through their tough times, connecting with them at a personal level, encouraging them to learn and grow, and having the humility to learn from them.” 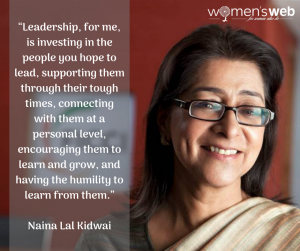 This entrepreneur has been the pioneer in her field since she graduated. A Padma Shri awardee, Naina Lal Kidwai was the first Indian woman to graduate from Harvard Business School. She is an Indian banker, Chartered Accountant and business executive. She was formerly a Group General Manager and the Country Head of HSBC India. She is also a former President of the Federation of Indian Chambers of Commerce and Industry. Also she handles all her roles with complete dedication and zeal.

Naina Lal Kidwai is not just an inspiration to women in India but to all youngsters.

Listen to her views on how to become successful here

“It is all about being detail-oriented, looking at finer things. It’s about perfection and not settling for the next best.” 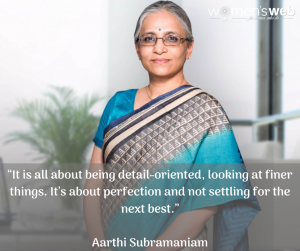 Aarthi Subramanian is a name to reckon with in the corporate world. She has been driving innovation in Tata Industries for years. The Tata veteran started her career with TCS nearly 28 years ago. In June 2018, she was appointed as an additional director of Tata Industries. Around the same time last year, she became the chief digital officer of Tata Sons. She is responsible for the firm’s digital initiatives and delivery governance.

You can read her mantra of success here.

“Women in the age of 25 to 35 they go through a whole lot of changes, they get married, have kids, maybe they move cities, they move families, and in that time if you can support them, it’s fantastic. We have to try as much as we can to say, ‘It is okay to have both, a family and a job.’” 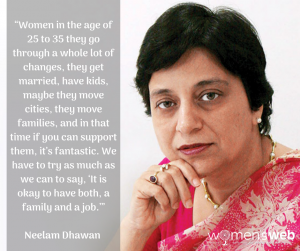 You can listen to her inspiring words on managing family with job here.

Maybe a few more such inspiring women leaders will emerge from our upcoming event, details of which will be found at the links below.

These are women who have impacted their functions, companies, industries and/or the larger ecosystem while climbing the career ladder, and who are the role models today for young women entering the field.

Created to shine a spotlight on women who are not only achieving their own goals, but inspiring others to think big, the Women in Corporate Awards 2019 will culminate in a power-packed event in Bangalore, where these senior industry leaders come together to connect.

We invite nominations from either corporate HR teams or individuals nominating themselves for the award. Nominees will be asked to nominate themselves within the framework of a particular industry as well as one of the three award criteria (Innovation/Diversity/Innovation). 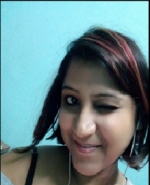 An optimistic and a believer of positive energies, nature and petrichor lover, up for any sport, prefers me time than parties read more...