Her Hidden Truth Was Deep Under The Earth, Right There!

A dusky girl, ‘married off’. Unusual expectations of how to be a wife. Domestic violence. And the disposing off of evidence of a violent end.

Bhumija rested her eyes on the fluttering leaves on the trees. The earth was again lit up with soft sun rays, the birds singing the song of a bright new day. In the daylight one could never tell of the storm that had created a ruckus the night before. Yet when observed carefully, she could see the plucked leaves, swirling in the winds and the fallen twigs, the subtle remnants of the recently passed hardship. The storm has passed, but has left its marks.

Just like the bruises and the scratches on her body. Every day.

“He is a professor… He has good income… He agreed to marry a dusky girl like you! What, do you think some prince will come for you? You don’t know him well? Oh! You have all your life to know him.”

All those and more rubbish that convinced her that marriage is the final goal. And he, a perfect husband material. Who can lose his cool sometime. He can beat her once in a while. That is no big deal. Compromise is the key word for any successful marriage. Everything will be alright if only she was patient.

“Why do you need to work? Isn’t your husband earning well? You should stay home and take good care of him. He has a little nit-picking habit.” She was taught.

Yes, he had a nit-picking habit. But it wasn’t ‘little’.

He wanted everything perfect. The perfectly round shaped roti of pre designated diameter. The perfectly clean glass surfaces. The list of her chores done and pending with reasons. And many other such whims and fancies.

Any deviation would result in unnatural abuse.

Yet she was patient. She was not so beautiful after all. He was giving her food, clothes and a house after all. And her parents? They were old. She couldn’t just leave and add to their embarrassment. What will the society say? So she was patient.

She forgot the salt in curry. So he threw the hot metal pan at her. Not an uncommon reaction. But, she could not hold her patience anymore. And at last she broke free from all the abuses.

Someone was ringing the doorbell. Her heart skipped a beat when she saw her ailing parents at the door.

“Why have you people come here? Your daughter has fled with her lover. Characterless bitch. But, of course, what else can I expect from a girl from such lowly family! Never ever dare to come here again. And if your daughter ever returns never try to bring her back here. She is dead for me.”

Bhumija wanted to shout and refute all the allegations. She longed to hug her parents for one last time and tell them all the truth. But, alas, they would never know the truth. Her truth has been buried with her dead body in the backyard under the earth forever. 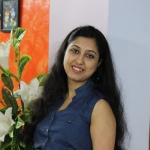 Sreeparna Sen is a Banker by profession. A Computer Engineer by education, she is a

Domestic Abuse And The Immigrant Woman