Arguing In Front Of The Kids? Some Myths Demolished About This ‘Bad Habit’

Arguing in front of the kids has always been considered a no-no, but did you know there is a healthy manner to argue in front of your kids? Read on to find out more!

For the longest time, in the consciousness of good parenting, arguments and disagreements between the parents were considered better kept under wraps, behind closed doors and post the kids’ sleeping rituals. A lot of research has proved time and again that there is a direct impact of frequent arguments and parental fights on kids’ mental health. The ill effects can range from difficulties in social situations to issues in making friends to complexities in developing trust in relationships and so on.

“An argument is a bad thing and it’s disrespectful to argue with adults” is the common notion. This is equivalent to saying that disagreeing with someone is bad manners. While this has beautifully been knitted into Indian culture and value systems under the veil of respect, times are changing faster than you and I think. Kids today do have a mind of their own and they are ok with putting across their points too. Disagreeing with anyone, arguing constructively and respectfully are the skills that parents need to instil in their kids.

Changing the existing paradigms, Breaking the status quo, Thinking out of the box, creating a positive impact on the world are the skills which are direly needed and can help kids lead happier, and successful lives ahead. They undoubtedly would be the most valuable facets of their personality tomorrow.

So then, we all agree that there is an existing need to solve the complex issues of this dynamic world. Ranging from the scarcity of water to ecological imbalances, from gender equality in workplaces to increasing the role of the father in parenting,  from cut-throat competition to cooperation in building businesses; respectful arguing would definitely be the key skill for the leaders of tomorrow.

How can then parents having arguments in front of kids be so wrong in this entire picture of positive parenting?

Now let’s understand what separates a constructive disagreement from a bitter fight. The baseline is that any disagreement that makes the kids feel unsafe or less safe is better avoided  in front of them. And any discussion or argument that does not target the emotional safety of kids will definitely help kids become better thinkers and problem solvers of tomorrow. In fact, a family is the first playground where kids see, understand, learn and imitate the problem-solving mechanism. And if parents do it the right way, so will the kids learn.

It is absolutely ok to have a difference of opinion; however, how it is managed and communicated is all that matters. Day-to-day differences offer perfect opportunities for kids to question the set rules, look at the issue at hand from a fresh perspective and offer solutions which are competitive and more effective. Creativity is an art and a skill which grows more when practiced.

So for the numerous times, I have been advised that kids should see both parents as having a common opinion on all the important and not so important things; and for the infinite researches that pointed out the fights, arguments, and spats between parents as one of the critical reasons for kids developing mental issues, I have this one answer: Argue in front of the kids – but do it the right way.

Model respectful discussing habits and show them how to reach the ideal solution. For the world is full of different people coming together from different backgrounds, with different thinking habits and patterns, from different countries and cultures and it’s virtually impossible to have same opinions unless you are dealing with your alter ego in a closed, walled room.

Make your kids future ready. Equip them with the right skill sets.

Argue because arguing is healthy. It cleans the air!

Watch this video to hear more on this subject: 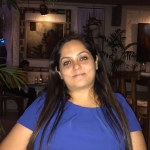 Kid Asks Uncomfortable Questions? Congratulations! You Have Done Something Right As A Parent!

Is Just ‘Beti Bachao, Beti Padhao’ Enough? Let Us Be Free To Dream And Make It Reality!

How Do You Talk About Your Teenage Self To Your Children, The Pre-Mama Phase As I Call It?