Back in her room, Shanaya reflected back at the strange encounter, the connect she felt in her bones. Had she imagined that conversation there? Was it wrong to dream, she wondered.

Back in her room, Shanaya reflected back at the strange encounter, the connect she felt in her bones. Had she imagined that conversation there? Was it wrong to dream, she wondered.

Finally, her inbox had the mail she had been waiting for… a posting in Amsterdam, the promotion, the perks that came with it, and not to forget the nice pay cheque at the end of the month. She mentally adjusted her crown, sat up straighter enjoying the warmth of success wash through her.

Shanaya had been the proverbial small-town-girl with stars in her eyes, when she had started. The laidback Goa was too small for her dreams. It hadn’t been easy for her parents to send her away to Bangalore and then Mumbai, to chase those elusive dreams of hers. And look where her dreams had taken her; as she remembered her family’s struggles, her hard work and determination. She had enough to send back home so her parents could take it easy, and now was the time to feel good and enjoy the good times.

Amsterdam was a picturesque city with its canals, museums, and the small eateries that she so loved to check out. She didn’t take long to settle into her new role and was out soon to discover the city.

There was one place she had been quite eager to visit and that was De Wallen, the famous red-light area of the city. She had always harboured a curiosity about prostitution, an almost morbid one, and had often wondered how difficult their job would be, to engage in a physical act, so deeply intimate, with a total stranger.

As she walked on the streets in De Wallen, she was awestruck. Nothing could have prepared her for this sight. The bright lights, the window displays, the openness and the buzz gave it an air of festivity. The window displays caught her eye and she gasped when she realised, what looked like mannequins from afar were actually real women inside, ‘showcasing’ their wares under bright arclights. For her this was the worst form of objectification, yet for everyone around her it seemed like business-as-usual.

As she continued walking, she stopped short in front of a window with a girl who in all probability was an Indian and then her eyes fell on the name card in the corner. The girl was her namesake: what were the odds?!

Their eyes met and as they locked gazes, Shanaya felt that in that moment they connected. She wanted to know her story and could almost hear her namesake speak. The girl on the other side had a smile on her lips as her eyes spoke, “I had my dreams, I wanted to rise above my circumstances. When I left the refuge of my home, there was a promise. I had a job waiting for me and it would only be a matter of time when I would rise in the ranks and make my parents proud. But life and that ‘job recruiter’ had other plans in store for me. I forget the count I changed hands like a commodity, to end up here.”

Shanaya wanted to say, “I hear you sister but shouldn’t you try to jump out of this hell hole? I am sure anything would be better than this.” The girl inside shrugged and nodded at Shanaya’s naiveté as if to say, “What you call a hell hole is heaven in comparison to what I have left behind.” The money is better, she seemed to gesture. I am taken care of, my family is, the money helps, it’s a job, she seemed to reassure Shanaya.

Shanaya stood transfixed, for what seemed like eternity, near the glass screen door that separated them. Someone brushed past her bringing her back to her senses. The girl inside seemed to fidget as her prospective clients walked past staring at Shanaya. It was business hours and Shanaya was getting in her way. Realising her foolishness, she shuffled on her feet to move on. With a slight tilt of head and a small wave, she smiled her goodbye and the girl inside responded likewise.

Back in her room, Shanaya reflected back at the strange encounter, the connect she felt in her bones. Had she imagined that conversation there? Was it wrong to dream, she wondered. She couldn’t shake off the fact that both of them shared more than just a name, they had dared to dream and worked towards fulfilling them. It dawned on her that those starry eyes and the bright smile of confidence on the girl’s face mirrored her own aspirations and that was what tied them together.

It were these dreams that had taken them places to finally wind up here. Which side of the glass screen they ended up was another story altogether.

Editor’s note: This story had been shortlisted for the October 2018 Muse of the Month, but not among the top 5 winners. 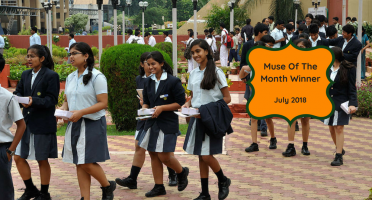