Blurb: The iconic dome of the Taj, charred on the first night of the siege, is long rebuilt, the bloodstains in the concourse of the railway terminus washed clean. But across the country, a few hundred people still bear the scars of 26/11, having lost loved ones in Mumbai’s worst ever terror attack. The pain hasn’t dimmed even after a decade but survivors have grown in courage and resilience.

In 26/11 Stories of Strength, The Indian Express dips into ten years of reportage on Mumbai’s terror survivors to find that single mothers have attended night school to get an education, children who lost a parent have dared to dream big, those who lost sons have learnt to find new purpose in living. Many have dug deep within to joust with anger, fear, the desire for retribution. And hearteningly, have emerged to tell stories of their triumph over senseless violence, through lives lived with honour and compassion.

It goes back further than 26 November 2008. To be precise, for some of us at The Indian Express, this journey began about a week after a series of bomb explosions ripped open Mumbai’s lifeline, my lifeline, the suburban train network, leaving 187 people dead in July 2006. Convinced that these 187 Mumbaikers’ lives were more important than another statistic, we set out to locate their families and ask how they had lived. Terror had mockingly set these families’ trajectories awry, but these 187 had lived, loved, sung, studied, worked, earned, hoped, cried and prayed. And a few of us were tasked with telling their stories. But as the weeks wore on, many of the bereaved whom we were visiting couldn’t comprehend why we wanted to scratch at still-healing scabs. And then there were the incomplete and incorrect addresses. Twice, I requested the editors to end the series; we had made our point, I imagined, in offering our readers a glimpse into the simple lives of those who had died, people who were anything but unremarkable to their loved ones.

It is always an unpleasant assignment to speak to the grieving. Certainly, some reporters are naturally more adept than others at holding a just-widowed wife’s hand, offering a few empty but reassuring phrases, making surreptitious notes. I have felt only terror at others’ grief, ridiculously out of my depths every time I poked around awkwardly at what are intensely private stories. Did he have a favourite Bollywood song? Did the two of you ever watch the Mumbai monsoon together from this porch? What made your dad especially angry? Do you have photographs of that holiday? Tell me what you said in that first love letter? Each time, the answer came gently, offered gingerly as if to a pensieve where other memories eddied around. We dragged those alien memories to our office workstations and then to dinner and then home, our poise not quite there any more.

Eventually we pressed on, and ‘187 Mumbai Life Stories’ were published, one every day until almost mid- January of 2007. And, however, inadequately captured and told, these stories, and most of them are accounts shared by grieving women and children, collectively forced us to see and appreciate human resilience triumphing silently. In the months since the bombings, one teenager had started college, a mother had earned her first salary. Some women, having met at a tribunal hearing cases for payment of compensation, had begun to stay in touch with one another—a survivors’ meet-up of sorts. The writers and readers of those stories both perceived life inching ahead right past that once insurmountable grief, lending meaning to the survivors’ struggles seen over a period of time. They were just accounts, survivors’ stories, and they were all we had to glean meaning, patterns and a connectedness in disparate narratives, and in their ability to do that they were uniquely powerful.

On the night of 26 November 2008, I was peering into my computer screen on the second floor of Express Towers, when barely a couple of hundred metres away two terrorists rushed into the Oberoi Hotel, firing their AK-47s. I was still wondering what had caused what I’d assumed to be a wedding procession’s fireworks to end as abruptly as they’d begun when the phone rang; two men with automatic weapons had let loose a crazy spray of gunfire inside Leopold Cafe, a couple of kilometres away. We knew within minutes that it was more than a gangwar— coordinated attacks by gunmen at multiple locations, including one just across our office building. A long siege of multiple locations in South Mumbai was beginning.

We stayed at our workstations that night, one explosion in the hotel across the road sending a tremor down our building, the frequent rat-tat-tat of automatic gunfire sounding too proximate in the silence of the newsroom. We made calls to check on colleagues who were on the field at various sites that were under attack.

Over the next few days, our reporters delivered striking investigative accounts of everything that had gone wrong— protocols for preparedness ignored, intelligence inputs disregarded, coastal policing absent. But there were also heart-wrenching stories of those whose daily lives would reverberate for many years with the impact of the attacks. There was Baby Sheetal, the youngest survivor at a few months, separated for agonizing hours from her mother Sunita who was herself barely out of her teens. Sheetal had lost her father at the train station, Sunita, her entire life as she knew it. Momina Khatun was four months pregnant, her husband Mohammed Umar Shaikh dead when a taxi he was driving exploded in Vile Parle. She had three older boys and one more on the way, and no means of subsistence. For the families of the 166 who died, the devastation was total, irrevocable.

The subsequent years took me to other scenes of loss. I met dozens of widows in drought-hit Marathwada, families of youngsters killed in senseless acts of caste violence. Many of them spoke of the shock at the suddenness of their loss. Everything had seemed just fine—until it wasn’t. In The Year of Magical Thinking, Joan Didion writes of how the thoughts and memories of the grieving inevitably gravitate towards those moments before the unthinkable occurred, mundane and everyday chores being completed when suddenly everything changed. It was exactly what I heard in Marathwada, also what I’d heard from the families of those killed on board the suburban trains, and what I’d heard from families of those killed in the 26/11 attacks. All things are indeed connected, and this was evidence. I continued to stay in touch with a few families I met in 2006, and many more I had met in 2008. Alone at home, I celebrated with a single malt when I found out that Baby Sheetal’s mother Sunita had found employment with the Railways. Another drink when, in 2016, a colleague found out she had remarried. On more than one occasion, I found that a survivor had reached out to another, a new story was beginning. The day after Ajmal Kasab was hanged, I didn’t call any of the 2008 survivors. Instead, I listened as Meeta Shah, who lost her husband Tushit in the train explosions of 2006, spoke eloquently over the phone about what closure and justice really meant, what forgiveness entailed, and where the death penalty sat wedged amid these. I was taking notes, but it wasn’t for anything I would write. I just wanted to talk to her that night because her story resonated at that moment. 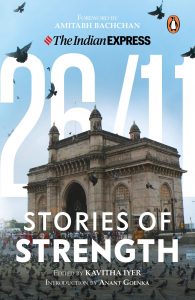 I had seen a congruence in dissimilar narratives earlier, and now with the passage of years I was seeing an assimilation of different stories all pointing to one thing. That grief does not pass, but people grow in strength and courage, those left behind adapt, deepen their resolve and give terror its only lasting answer—they survive, they dig out unknown reserves of resilience and nerve. If the suddenness and senselessness of their loss was the terrorist’s way of mocking their lives, their continued harmonious existence with people of all faiths had the last word. Some went on to question the system and demand better preparedness. Others made it their life’s mission to pay homage to a martyr. Women turned unexpectedly into breadwinners. Sarlaben Parekh, now eighty-five, lost her only son and daughter-in-law on 26/11, but took on the Maharashtra government with a civil suit seeking better surveillance systems. Major Sandeep Unnikrishnan would have turned forty-one this year, and on his birthday his parents K. Unnikrishnan and Dhanalakshmi sent out greeting cards from their Bangalore home to a few thousand people they have met over the decade. ‘Salute to you on your forty-first,’ the card said, another little nudge in the couple’s continuing efforts to make sure the country values his martyrdom. Back in Mumbai, Govind Singh Kathayat welcomed the birth of his little boy in February 2018, his second child. Diagnosed with schizophrenia after the attacks, he has finally put a broken marriage behind him and made a fresh start. Rohan Kamble, nineteen, who lost his father, a maintenance department staffer at the Taj, has begun to nurture dreams of entrepreneurship and travels across the world.

If, for a species that seeks out meaning, stories help find our place within the wider world, these accounts over ten years are an affirmation that there is meaning and inter-connectedness in the human existence despite the general bleakness of everything. And because anniversaries can be useful punctuations in time for us in the news industry, providing context and a sense of progress made amid headlines and news events rushing ahead, the tenth anniversary of the 26/11 attacks is an ideal time to remember these stories. They are reminders of that incredible bright light of oneness with the other.

This is an edited extract from 26/11 Stories of Strength by The Indian Express, available now through Penguin Random House India. Published with permission.

If you’d like to pick up 26/11 Stories of Strength by Indian Express, use our affiliate links: at Flipkart, at Amazon India, and at Amazon US.