At A Very Dark Time In My Life, I Survived Only Because Of My Women Friends

Women's friendships are crucial to their lives - these often lift one up and sustain us in dark times. A touching personal account.

Women’s friendships are crucial to their lives – these often lift one up and sustain us in dark times. A touching personal account.

It felt like I was in an abyss, a dark and endless one at that. Like I had been held underwater for far too long while I struggled, fought, and kicked for a breath of fresh air. It was like being punched hard in the stomach, reeling with pain, gathering the courage to get up and being punched once again – a vicious cycle.

It’s easy to see that these were signs of grief and trauma. I was engulfed in sorrow and was slipping further and further into the pit of misery and despair. I had to make a move and change the situation I was in primarily because of my own actions. But to do so, I needed something. Not something monetary, but a push. Or perhaps a pull, a hand stretched out just far enough so as to assure me of its unwavering presence on the other end.

That’s when I wiped my eyes, looked around me, and realised the actual depth of my abyss. It was only as deep as I wanted it to be. I could see not one but several hands extended towards me, urging me to take that one step across to the other side.

These hands had been there all along. I hadn’t been able to see them clearly as the tears had blocked my view of what lay ahead of and around me. Those hands were signalling to me to cross over. It took boundless courage and strength but I did it. I took the plunge! I was free!

It was in these moments of suffering that I realised the magnitude of female friendships. If not for those outstretched hands, I probably would never have been able to do what I did.

Yes, I had to take that step all by myself. Yes, I had to keep moving each day. Yes, I had no idea what I would do tomorrow. But these women, these firebrands, had shown me what it means to be a woman of substance. While I was losing faith in myself, they clung on to me like melting wax on a wooden surface. They made me realise the consequences of forsaking my self-worth in exchange for affection.

I was no longer delusional. What more did I need to stand upon?

The events of tomorrow are beyond my knowledge or control, but what I do hold power over is myself – today and tomorrow. I have realised now the intensity of kindness and generosity. The power of simply being there for someone who may be holding on just by a thread.

We women are powerhouses, the source of strength, power and courage. It’s time we realise this and stretch that hand out to another in need. 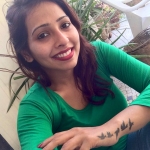