And That Will Be My Guru Dakshina!

So many of us have been touched by your presence in our lives, at a vulnerable time in our lives. A time when we could have been led astray or felt deficient or just different.

The first winner of our July 2018 Muse of the Month contest is Ujwala Shenoy Karmarkar.

And That Will Be My Guru Dakshina!

The auditorium echoed with the sound of applause. Mrs. Kumar, a sprightly, bespectacled grey-haired sixty-year-old, ascended the podium with a vigour that belied her age. Dressed as usual in a crisply starched cotton sari with not a fold out of place, her trade-mark red bindi and gajra adorning the bun, she looked out at the audience. Her “girls” as she called them, were all there in force, perhaps not every last one of them; that was surely impossible! She had taught at this secondary school for girls for so long; thirty-two years to be exact. Thirty-two years of the privilege of shaping some brilliant minds, loving characters and charming personalities, she thought fondly.

She could recognise many faces. In fact, if she exchanged just a word or two with any of them, she could recollect their time with her in the school like a flashback from a movie, so encyclopaedic was her memory. She recognised some of them right away… Bindiya, Anjali, Himani, Veronica…and ahhh… Deepa, and was that Arnaz talking to Seema in the front row? Squinting out at the crowd, she was startled to see that the seats were full and a large number of ‘her girls’ stood at the edge of the crowd, lining the entire wall of the auditorium. There was some jostling for place and some late-comers trooped down to perch on the carpeted steps in the centre aisle. She recognised little Dipika, bossy and managing as ever, straightaway. Well, not so little now, her height still the same, but her stature that of a famous television producer. And was that Tejaswini next to her? Rotund and smiling as ever, she was a nursery school teacher in Chicago.

When the audience was settled, the microphone was commandeered by Sandhya. Tall, dusky complexioned and statuesque, her appearance succeeded in hushing the last of the whispers. Indeed, thought Mrs. Kumar, and why not? Sandhya was a super-model, sought after by many fashion-houses, in demand for her willowy frame, her gazelle-like walk and lustrous complexion.

Sandhya began to speak. “Ladies, we have gathered here today to honour our beloved teacher, Mrs. Kumar. Before we proceed, let me clarify that we shall break with tradition and not limit the number of speakers here today. We shall have some of you come here… and speak of their own experiences with her.”

She smiled at Mrs. Kumar who looked slightly befuddled now.

“Ma’am, it is like this. Almost a year ago, when we began to plan this, we reached out to all the girls who were part of the Alumnii Association and sent them all mails and messages. We asked that they relate any anecdotes that they had of you. We were overwhelmed by the response – the stories…lives that you influenced. So many of us have been touched by your presence in our lives, at a vulnerable time in our lives. A time when we could have been led astray or felt deficient or just different. There were so many of us who wished to say thank-you. We then decided that some of us would stand up here and tell you personally what our time with you meant to us.”

Sandhya paused for a minute and continued, “I came to your class, ma’am, a gawky-tall-dark-ugly-girl. Low on self-esteem. Lonely. Feeling bewildered. Excluded. Two months into your class, you called me into your room during recess. And had a long talk with me. I cannot remember what I said. But your kindness warmed my heart. I remember you saying, ‘Sandhya, you are special’. Even today, your words echo in my ears.”

Sandhya stopped, her voice noticeably husky. She stepped down.

Dipika, the “little”one came up next. “I was teased for being short-statured, but Ma’am, you told me that ‘Good things come in small packages’.” She smiled at the audience. “Mrs. Kumar told me, ‘ you have qualities that eclipse your lack of inches. You are a mover and shaker, destined to be at the top. And, here I am…the producer of TV shows and my own boss! Thank-you, Mrs. Kumar.”

Seema stood up to speak. “I moved here two years after my mother passed away. My father and I – that was my entire family. I wore clothes that were ill fitting, my hair was badly cut and I did not ‘fit in’ with the others, who had Moms to look after them. I remembered I had my periods one day. I was crying in the corner because I did not know what was happening to me. I thought I was dying, just like my mom! Mrs. Kumar came upon me that day. She…she took me home and explained everything. Then she had a talk with my dad. Later she arranged for a small shopping expedition. She said, ‘Seema, bad things can happen to good people. You are a good girl. Just give the other girls time to like you.’ And…that is what happened. Thank-you, ma’am! “

Arnaz walked up next. “I was and am a nerd. I love books, and the written word and now they love me back. I am based in New York, the editor at a publishing house. But back in school, I was just a weirdo with her nose in her books, unable to connect with anyone except fictional characters. I was lonely, I suppose. Mrs. Kumar, I thank you for listening to my ideas, introducing me to blogging, reading what I wrote, cheering me on. For, I guess, letting me come to terms with myself. For giving me the confidence to realize that I am not weird; just limited edition…you know?” She finished with a laugh.

On and on it went, some of the girls even Skyping from overseas…Nitu who was wheel-chair bound from infancy and was now director of an NGO… Priyanka, the ‘tomboy’ who was now sports instructor in a college… Shikha, who had spoken with a stammer, now a banker……

As her girls went on to speak, Mrs. Kumar felt a well of satisfaction within her.

When the last of the speakers had done with relating her memories, Mrs. Kumar was invited to speak.

She looked at her girls and cleared her throat, her voice temporarily fogged by emotion.

“Girls,’ she said, her style of speaking and its cadence taking them all back to their school days. “When I prepared my speech today, little did I know that I would change its content when I was called upon to say a few words. Indeed, I am now sharing something that I never thought that I would with any living soul.“ She paused. “I was ten years old, when I lost my sister. She committed suicide after a brief battle with depression. Shobha was older than me by five years, and we were not very close. Her passing was a closed chapter in our family, never discussed, or spoken about. Eight years later, I came upon her diary. Written in the last few months of her life, she wrote of feeling like a loner at school, awkward, singled out, at times ridiculed, and having no friends. My sister had polio in childhood and consequently had a limp. She had a lovely voice and could sing beautifully. She was also a good artist. She had a friend; a good friend who moved way from our city when her father was transferred elsewhere. After that, she became withdrawn, and quiet. Could she have spoken out to someone? Sure! Sometimes it takes that one person to make us feel less alone… feel special, unique, capable of anything! Because we are all special… all of us! “

She smiled at them all. “When I saw you girls, all in your teens, I saw my sister all over again… and I am glad that I could help you uncover that special something in yourselves!”

There was a standing ovation at this.

“Girls! You are each a limited edition! Promise me that you will help other such wonderful people find themselves… and I will consider my Guru Dakshina paid in full.”

Image is a still from the movie Hichki 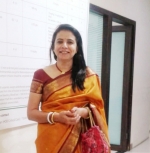 Hi. I am an anaesthetist by profession living and working in Mumbai. I truly love

#MuseOfTheMonth Cue For November 2018: I’ll Always Find My Way Back

#MuseOfTheMonth Cue For August 2018: “Just Living Is Not Enough…”