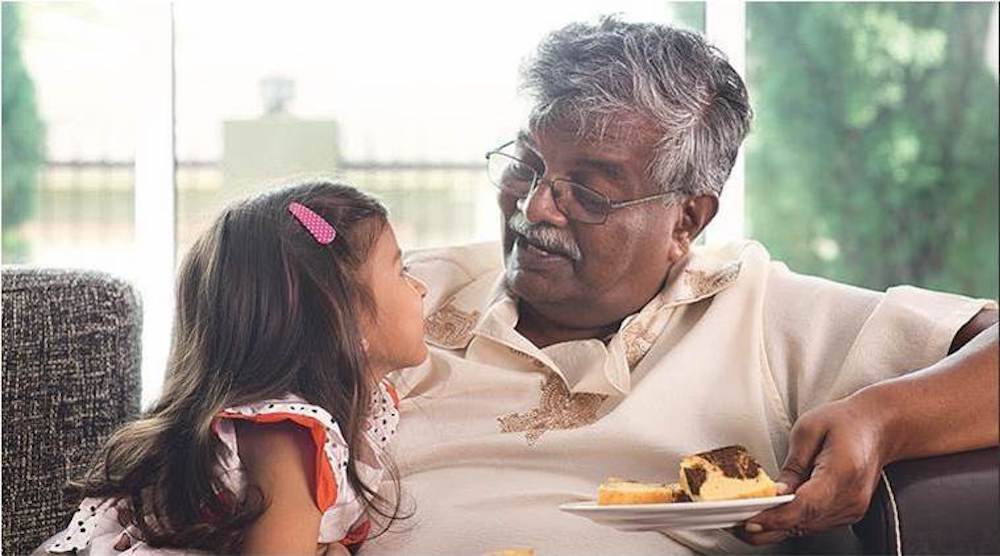 A woman’s personal story about her grandfather, a cranky old patriarch whom she loved, and whom she misses now that he is no more.

My sister and I spent our childhood with our maternal grandparents. While we were super pampered, we were definitely not spoiled by them; at least I like to believe it that way. Grandparents’ love is, in a way, very different compared to how your parents love you. While your mother and father say no to you every now and then, grandparents almost always consent to your every little whim; so they’re always your best bet in any given situation.

I used to be grandpa’s pet while my sister was grandma’s; even though it was true, grandma would never admit it. Anyhow, everyone used to call him “Bava” Engineer as grandpa was very well-known and respected for his work. But more than that, it was his generous, friendly and witty nature that attracted people towards him. Like a leader whose advice was always respected, grandpa was never short of friends, as he loved having people around him, and also because he simply enjoyed the concept of giving.

Tall, lean and fair-skinned, the highlight of his oval face was, of course, the shining bald head. And he had long and unusually beautiful fingers.

My grandparents got married after a very controversial love affair. While they met through common friends, they got to know each other during the daily commute from their common native town of Thalassery to their work place in Kannur. Soon, the friendship blossomed into love.

Grandpa’s mother was strictly against the wishes of her son as she felt he deserved a better girl. But the two got married, a wedding that was attended by all except his mother. Things were sorted out and relationships mended after the birth of their first child; including my super-energetic mother (who was third eldest), they had five children.

If you asked them, they would tell you that he was a very loving father, but very strict at the same time. All of them used to get beatings from him with a belt, and for the right reasons as they would later say, but the famous five always continued to be the most notorious kids in the colony.

…but an indulgent grandfather

As grandchildren though, we never faced his angry side; I don’t remember even a single instance when he scolded me. Instead, he was like a saviour who used to take sides with me every time granny and I had a quarrel; “Raji, leave her alone, Juju va moley” he used to say.

I just loved spending time with him. I would shout loudly and open the door for him as he returned from work, and I would stop studying once he was home. At times, I used to accompany him company on his morning walks.

A day with my grandfather

Grandpa used to get up early in the morning at 5 o’clock, tie his white dhoti, wrap a turban to cover his bald head and call out to his Raji for the packets. One packet contained the last day’s garbage, which he preferred to carry out himself to the trash bin located about a kilometre from our house, while the second packet was for a neighbourhood cow that would be waiting eagerly for her daily treat of tasty banana peel.

The next stop was at the Milma booth, where he used to buy four packets of milk and his favourite Britannia Milk Bikis biscuit. Then he would take a one rupee coin and throw it inside an unusual-looking masjid, which was on the way to the clinic to get insulin shots for his low blood sugar. He told me it was some sort of ritual to throw the coin and it helps in fulfilling your dreams.

All throughout this short walk, he used to hold my hand tightly and keep talking about people in the neighbourhood, this house, that house and the house beyond, as he knew everyone in the colony.

By around 7:30, he would return for the morning shower, followed by a lengthy prayer time, during when no one in the house was supposed to make noises. Grandma invariably used to get a fair bit of shouting as she would make some sort of racket from the kitchen.

Then it was time for office. He would be back by 8:00pm and, after taking his shower, would sit down with his drink at 8:30 sharp, which he would enjoy along with a special spicy mixture, sliced cucumber and carrots, which, if not ready, would get grandma a few scolding. He would sit in the veranda, switch off all the outside lights and immerse himself in the silence of the night for one hour. What he used to think during that one hour, only he was aware.

He had his favourite brand of toiletries; he loved his Pears soap, Cuticura talcum powder and Vatika hair oil. I used to wonder why he applied hair oil when he was bald; maybe he liked the smell of it. He loved olive oil too, which was used sparingly, once a week, as it was a premium item that his eldest son used to bring when coming from Dubai.

We lost grandpa in 2003, four years after his leg was amputated following an infection. As he was a sugar patient, there was no other choice to stop the infection from spreading. At that time, me and my sister were studying in Coimbatore in the neighbouring state of Tamil Nadu. My mother told me that there was a sea of people who had come to say goodbye, as most of them felt as if they had lost someone from their family. By the time we reached home from Coimbatore, all the last rites were over.

I was extremely sad, and there is no way anyone can replace him in my life. I remember talking to him three months before he passed away; he sounded very sad and was asking when I could see him. I knew he was crying. When I got a four-day holiday, I told mom that, instead of going to Wayanad to see them, I would be going to meet grandpa first. She was angry and upset as she was expecting me, but I had made up my mind that no matter what, I would see him first, and now, looking back, I’m so happy that I went to meet him as it was our last. I still remember his eyes filling up with tears as we said good-bye; that was the first and last time I saw tears in his eyes, maybe somewhere in the corner of his heart, he knew it was our last meeting.

He is not with us anymore and if there is someone I miss terribly, it is him. I miss reading out the newspaper to him loudly while he used to shave his beard. He used to make faces and correct me if I read something wrong. I miss giving him sweets without my grandmother noticing. I wish I could hear him call my name again. I remember him telling me once, no matter what others say, if you think you’re right from your heart, you just need to do that. I miss keeping my hand on his bald head, and he would shake it like a kid. I love you achappa, and no matter what others say, I know I was your favourite grandchild.

Grandparents Are Special. Near Us Or Far Away, They Will Always Be In Our Heart

When My Grandfather Began His Stories With “Beta Hamare Zamane Mein Toh…” – It Was Magic!