Magnificent Manu Bhaker - at just 16, her immense confidence and calm in the face of extraordinary challenges, is inspiring. 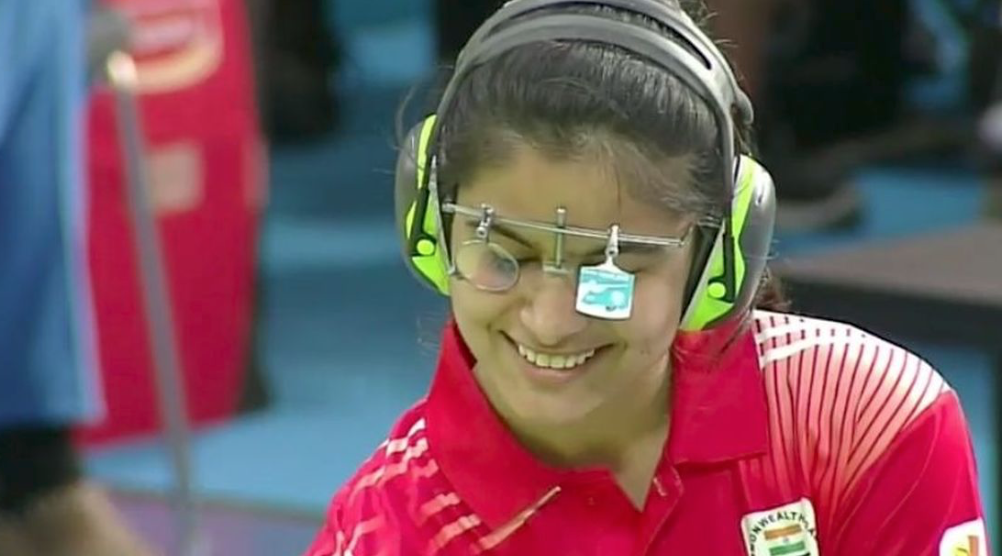 Magnificent Manu Bhaker – at just 16, her immense confidence and calm in the face of extraordinary challenges, is inspiring. Congratulations to this young winner!

Whenever I lost a game, I fought more… I trained and re-trained myself and that has made all the difference. Losing is equally important as winning. Whenever I have a bad day, I go back to the shooting range and train myself more. I hated my trainer for every time he ridiculed me on the field, but it was his criticism that has mattered in the long run. There is indeed no shortcut to success. – Abhinav Bindra, Olympic Gold Medalist (category: shooting).

Born in Goria Village of the Jhajjar district of Haryana, the 16 year old Manu Bhaker has made history. She represented India in the 2018 commonwealth games and has now won the gold medal in the 10m air pistol event at the International Shooting Sport Federation (ISSF) World Cup in Mexico. It was a Sunday, 08 April 2018 and unlike others watching TV or enjoying a movie, this young girl went on to make the country proud with her gold medal. This achievement was was previously attained by Rifle Shooter Gagan Narang and pistol shooter Rani Sarnobat at age twenty three in the years 2006 and 2013 respectively.

Not much is known about Manu Bhaker’s childhood. As per the sources her father Ram Krishna Bhaker is a chief Engineer for the Merchant Navy and her mother Sumedha, principal of her school. A born sportswoman Manu was proficient in Huyen Langlon, a Manipuri form of martial art along with boxing, tennis and skating. She achieved all these feats when she was only fourteen – at an age when parents try to be over protective of a female child, this wonder woman and her parents proved otherwise.

Says the First post, “Ladies first. And nobody will grudge the Indian sportswomen from a variety of disciplines the limelight they drew on themselves and their ilk on what was a Super Sunday for the contingent at the Commonwealth Games […] Teenaged sensation Manu Bhaker, Punam Yadav and the Manika Batra-led women’s table tennis team picked up gold medals to raise the count by Indian women to five — of the seven that the country’s athletes have won so far.”

Trained under the pistol legend Jaspal Rana, Manu displayed extreme discipline, self control and confidence in the games. She swiped off the feat with a CWG record of 240.9 in comparison to her senior teammate Sidhu whose score board marked a feat of 234. In the finals Manu achieved a sensational 388 with Sidhu making it to 379. It was only after she clinched the gold medal that she showed her emotions and said, “I am very happy… it is my first Commonwealth Games and I won with a qualification record also. The gap between me and the second competitor that was a huge margin. So it was pleasure winning this medal for India and I am very, very happy.” She quashed the local favorite Alejandra Zavala Vazquez by a margin of 0.4. Alejandra is much senior to Manu and had been practicing since 1998 – four years before Manu was born.

It was sir Japal Rana’s tutelage, Manu’s hard work and the support by her father that led to her success; she started shooting only two years back in 2016 and soon went on to become National champion in the Youth (U – 18), Junior (U – 21) and senior levels, bagging fifteen medals in various championships in December in the year 2017. Her proud father says Manu is a girl in whom he  loves to invest and that she is one person who hates to lose.

She practiced at her Universal Senior Secondary school in Goria village, the only place to have a shooting range in the Jhajjar district of Haryana. The range was almost twenty five kilometers from her residence and the shooters practiced for almost five hours in a day.

Apart from the spectacular win, Manu’s medal stands out as she reached the final round by competing with  three Olympic and multiple world cup medalists – Celine Goberville, Anna Korakkai and Heidi Diethlem who are not only her seniors but are much more experienced. Also, this is the first World Cup where women shooters hit 60 shots in the qualifications. Women shooters used to shoot 40 shots, before the ISSF changed the rules from January 1, 2018 to bring gender equality in the sport.

It is a mandate to remain calm and mental grit is an absolute necessity in the field of sports. To all the girls/women pursuing sports, we can learn a lesson from this teenager who when questioned what ran on her mind before the final shot, said, “I just told myself to focus on my technique irrespective of my standing in the final. I just did that and it worked.”

Olympic gold medalist Abhinav Bindra congratulated Manu and reminded the Sports Ministry of the need to look at women’s sports more closely. As I had mentioned in my essay on Mary Kom, we need no false felicitations but improvement and financial aid to women sports infrastructure.

To all women keep calm, forge ahead in long strides. Let people mock, hate and ridicule you. The more people misunderstand you, the greater is the determination to achieve success! In the meantime, magnificent Manu Bhaker – go, the extra mile! Touch the open sky!

Image is a screenshot from the video