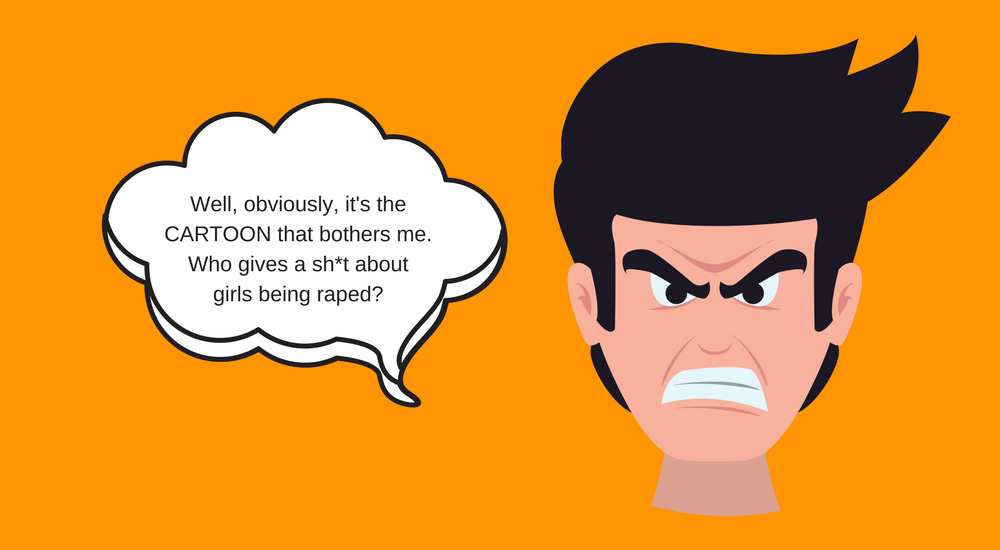 In This ‘New India’, Drawing A Cartoon Could Land You In Jail, But Supporting Rapists Is A-Okay!

By now, I feel, most of us will agree that the heightening religious intolerance is festering the vary basic fiber of India’s democracy. The latest proof of the same is the FIR lodged against Senior Journalist Swathi Vadlamudi, for drawing a harmless cartoon of Ram and Sita to show the dismal state of women’s safety in the country.

In the said cartoon, Sita tells Ram, “I’m so glad I was kidnapped by Ravan and not by your bhakts!”

The FIR was filed at Saidabad police station in Hyderabad by Hindu Sanghatan, an off-shoot group of Vishwa Hindu Parishad, a right-wing Hindu group. The FIR was filed under Section 295 (a) of the IPC (“deliberate and malicious acts, intended to outrage reli­gious feelings of any class by insulting its religion or reli­gious beliefs”).

This is not all. Swathi shared the screenshots from her Facebook page where she has been mercilessly trolled, attacked and threatened with dire consequences. Someone even asked her whether she remembered Gauri Lankesh, thereby daring to indicate that the same fate awaited her, maybe!

Doesn’t this bring to the fore, the sad state of our nation today?

A child was brutally gang raped and murdered while being held captive for days, and an outfit named the Hindu Ekta March, along with lawyers and politicians, started a protest march in SUPPORT OF her rapists and killers! (Yes, that had to be capitalised, since you may have expected the opposite reaction).

In another instance, a girl in UP was raped by a BJP MLA and no amount of pleas to the Chief Minister could get her justice for a long time. Not only that, the victim’s father died in police custody while begging for justice. The culprit was arrested only recently when the UP government came under the fire of widespread national criticism.

Despite such heinous acts against women, a cartoonist cannot express her sentiments through Gods and Goddesses. On 16th April, the Network of Women in the Media released a statement condemning the FIR against Swathi.

Can we for once stop to think how absurd the situation in our country is right now?

While people are offended about the depiction of Ram and Sita in a cartoon, they’ve forgotten the real issues that should offend them right now.

Women’s safety is a human rights issue and even in this day and age, we need to shout about it from the rooftops for people to hear!

To all those people feeling ‘offended’ by a cartoon, I say this:

The growing religious intolerance and the ominous abuse of political power is something that should offend you.

A Chief Minister not taking actions against a Rapist MLA (until he’s practically forced to take action) should offend you.

A protest rally to support rapists and killers is something that should make you hide your face in shame and should offend you to no end.

The fact that someone is rightly pointing these facts out through a cartoon should be the least of your concerns.