What I Learnt From Gauri Lankesh: “Pen Must Never Stop If You Pen The Truth”

My tribute to the Fighter, Gauri 'Chitti', as I knew her. Gauri Lankesh may have been murdered but she continues to inspire younger journalists. 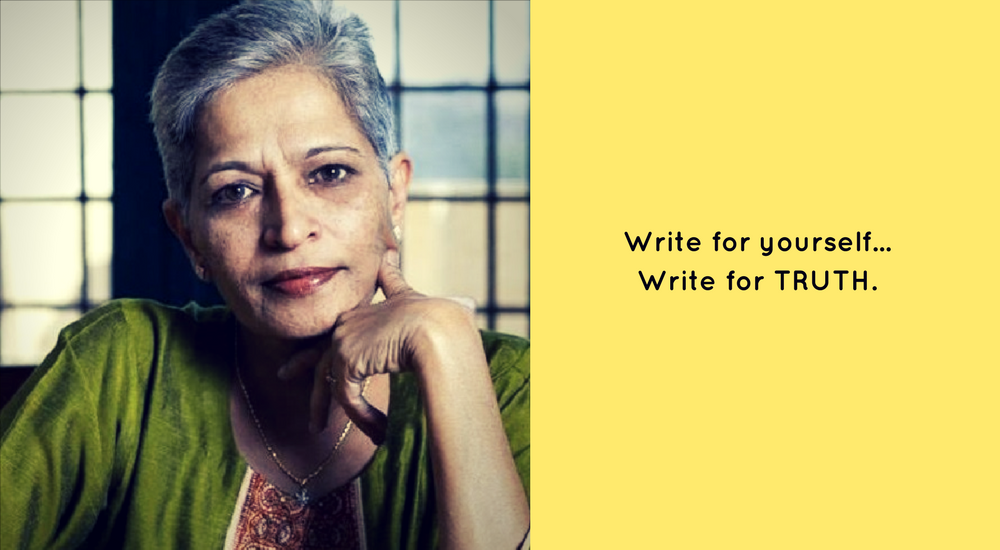 My tribute to the Fighter, Gauri ‘Chitti’, as I knew her. Gauri Lankesh may have been murdered but she continues to inspire younger journalists.

I had met Gauri Lankesh at Indian Women’s Press Corps (IWPC), New Delh in my very early years as a journalist in 2007. I had just stepped out from Hindustan Time to join ANI-Reuters. Gauri Chitti (as she had asked me to fondly address her after our very short, yet very warm meet) was a very straightforward, yet caring, loving and motivating person – especially towards young women journalists.

I still remember very clearly, she had asked me, “Young girl, who do you write for?” And even before I could think of an answer, pat came the next line, “Write…write for yourself, write to motivate, write for the masses, write for truth…write for a meaningful life that can glow in the darkness that surrounds us. The pen must never stop, as long as what you write is right, truth.”

I was perhaps then too young to understand the deeper meaning in her words. But yes, they did leave an impact on me. Early this year, when I quit my job in March with CNN-NEWS18 to “find that very meaning of my life”, I called her. I had called her to say I was a bit shaky to tread a path unknown. She was perhaps too busy to connect and thus I left a message. “Well done, I am proud of you. Hold faith, it will not disappoint you,” was the reply which had a big emoticon and “love and blessings” written at the end.

So, over the last few months, her words “write for truth…write for a meaningful life that can glow in the darkness” kept guiding me. I kept penning one piece after the other that became my connect to many who voiced their free opinion through me and to others who could relate to it and find a better way to come out of their own situations. I regret I did not call her again and then my pen stopped one day when I found out that her very words of truth had left her in a pool of blood.

For first few hours, I simply could not come to terms with life. The woman with such warmth and courage had left us. A few hours went in tweeting about our warm exchange, about the values she had left behind and other such fond memories and values she stood for.

My friends egged me day-after-day to pen a tribute for her. But, I could not muster the courage to accept the truth that she is no more. Just a ten minute meeting with her, that too a decade back, had cast such a spell on me…that I could not accept that someone could kill her so brutally.

But then I had to accept the truth – the truth that Gauri Chitti had dedicated her life to.

I had to muster courage to accept she is gone, but not her values. I had to accept that tomorrow the so-called investigation might or might not reveal the truth, but we have to move on stronger on a path that she lightened. Thus, here I pen a note, a tribute to the one and only Gauri Lankesh, who taught us all, “a mighty and truthful pen must never stop.” So mine had to restart again as well…in her honour.

So here goes, My Tribute to #GauriLankesh.

In the dark she found light
Brighter than many could ever see
With a mighty pen she shone the dark path
Because truth was her power, her mastery.

“Who do you pen for”
She had asked me with a smile
“Write for Truth, write for Light”
She encouraged, leaving me in deep thoughts for a while.

It took me a long time,
To develop a Voice of my own
And now that I have it,
I am not going to be Silent.
Will you join me?….