A personal list of Sridevi movies that I have loved. My heartfelt tribute to this excellent woman actor and strong woman. May you rest in peace, Sridevi!

A personal list of Sridevi movies that I have loved. My heartfelt tribute to this excellent woman actor and strong woman. May you rest in peace, Sridevi!

“Cover her face; mine eyes dazzle. She died young.” ― John Webster, The Duchess of Malfi

This is just as true of Sridevi. 54 is no age to die. Certainly not for a woman who had just stepped into the second innings of a long and illustrious career as an actor par excellence, even if many of the movies she acted in were pure commercial masala ones.

Sridevi was one of the few women actors ever, who could hold the whole movie on their able shoulders, in an industry traditionally in favour of male actors in leading roles. Both her movies that have hit the box office after her re-entry into the arena were fabulous, and had raised many hopes of many more such fare, but it was not to be.

This is my personal tribute to Sridevi. I am not a big movie goer, preferring the company of books, but I have certainly watched a fair number of her movies. I do not understand the other major Indian languages that Sridevi movies have been made in, so this is necessarily a list of Hindi movies. This list of Sridevi movies may not necessarily be those that did the best on the box office, or the best that she has ever done, but they are my personal favourites. 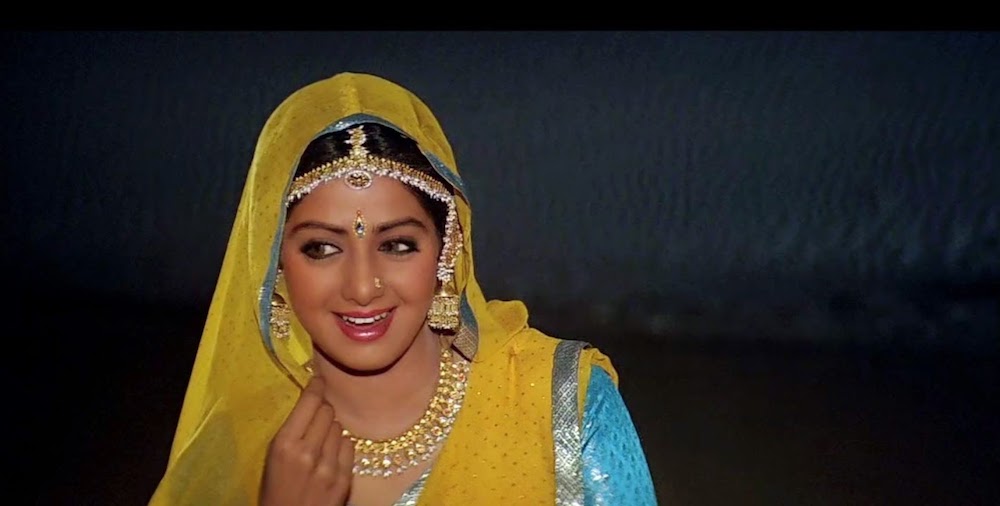 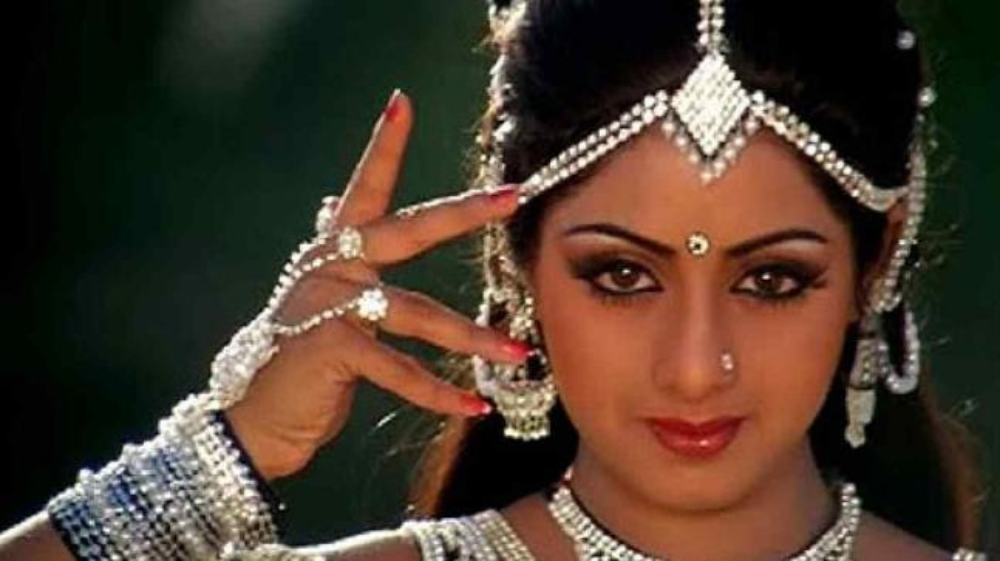 This was not a Sridevi movie in its essence, but she was certainly notable in the itsy bitsy role that she acted in, as the younger sister of the titular character Julie, portrayed by another powerful woman actor from the south, Laxmi.

Fabulous, fabulous double role of mother-daughter by Sridevi – who can forget the iconic song “Morni Bagah Mein Bole” that she danced to in the deserts of Rajasthan? This was also a movie far ahead of its times, that broke the Indian stereotypes of who may marry whom, also one of the more muted ‘acting’ roles by Anil Kapoor.

I remember going for this Sridevi movie with a posse of hostel mates, and one of us actually whistled out loud when the first song came on. Though a potboiler of sorts, it was a well made film, and before English Vinglish came to be, the mental images of Sridevi I have were from the song “Mere Haathon Mein Nau Nau Choodiyan…” and a yellow chiffon sari clad Sridevi by herself in the rains, just before the song “Lagi Aaj Sawan Ki Phir Woh Zadi Hain”. Yes, I know it was a lot about the male gaze, but I loved Sridevi in it.

A remake of a Tamil movie, this was as much Sridevi’s movie as it was Kamal Haasan’s, and brought out the talented actor in her so much more than the other Sridevi movies I have watched. It is an experience not to be missed.

This was the first among the Sridevi movies I have watched on the big screen. Larger than life, a kind of very ‘Indian’ sci-fi, this was a fun movie – who can forget Miss Hawa Hawai?

Another double role, this was a very poor cousin of the Hema Malini classic Seeta Aur Geeta in my opinion, and was watchable just for Sridevi.

This is a fairly unknown Sridevi movie, and on the serious topic of intercaste love and the resultant honour killing. Even though it is an old world, old style movie, with some bombastic parts, it is worth a watch for Sridevi and the theme.

I rejoiced when Sridevi came back to the movies with this fabulous woman centric movie, sensitively made by a woman director, Gauri Shinde. A movie which gave a foretaste of much that could have been (sigh) in a brilliant second innings for this actor. A movie that spoke so well of gaslighting, something that almost every woman faces in her life.

A thriller, this was not just Sridevi’s movie, but also that of three other actors – Akshay Khanna who plays the good cop, Nawazuddin Siddiqui as the detective, and the girl in the role of Sridevi’s daughter, portrayed by the very talented Sajal Ali.

This is a sad day. My heart goes out to her daughters who have lost a mother so early, while mourning the loss of an actor who had so much yet to do.

Header image is a still from English Vinglish

A fan's tribute to the superstar - Lalita Iyer's Sridevi: A Queen of Hearts - is exactly what it sounds like, and should be read as much for the author's razor sharp style, as for the iconic actor herself.

A fan’s tribute to the superstar – Lalita Iyer’s Sridevi: A Queen of Hearts – is exactly what it sounds like, and should be read as much for the author’s razor sharp style, as for the iconic actor herself.

When I was asked whether I’d like to review Lalita Iyer’s Sridevi – Queen of Hearts, I agreed just because of one reason. No, it wasn’t because I was a Bollywood buff or a huge Sridevi fan, because fortunately or unfortunately, I’m neither. I wanted to read and review the book because of its author Lalita Iyer. I’ve read Iyer’s previous book and I follow her blog. Her writing appeals to me primarily because of its down to earth charm. Reading her is almost like sitting for a session of what we Bengalis call ‘adda’ with friends. No matter what she writes about, she manages to make it sound like an interesting anecdote and that’s why I feel that it is effortless reading her. Iyer delivers with her sharp yet simple style even in Sridevi.

Dear Sridevi, I Wanted To Be That Tough Woman You Played. We Will Miss You!

Besides her intense acting, Sridevi brought to many women a vicarious pleasure through the many 'tough women' roles she essayed - and enjoyed. 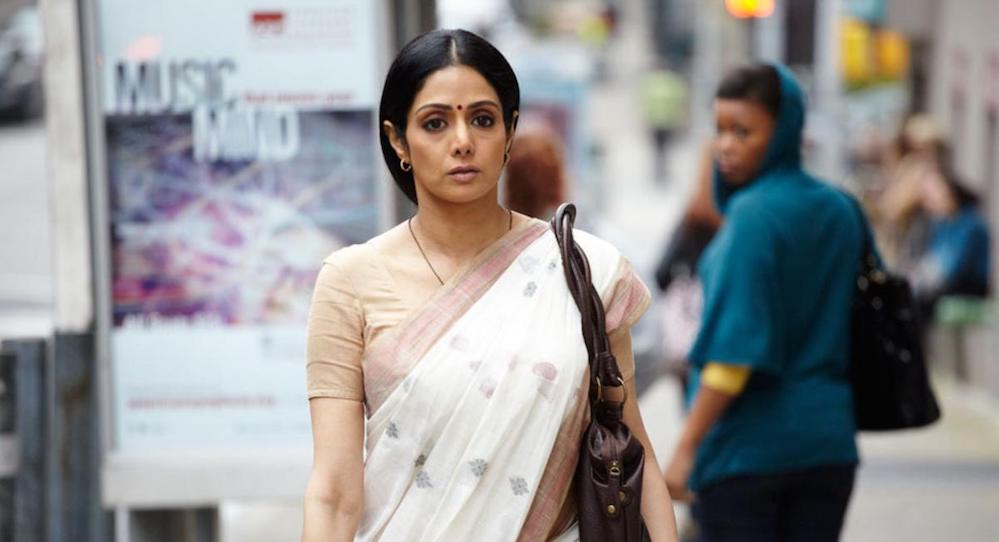 Besides her intense acting, gift for comedy and her stunning dancing, Sridevi brought to many women a vicarious pleasure through the many ‘tough women’ roles she essayed – and enjoyed. She will truly be missed!

Sometimes when I get very upset, I feel as though I should block each person on social media as I had previously done on Facebook; recently though, I came across a tweet which read, “Life is very short. And there’s no time for fussing and fighting, my friend”. Today my eyes well up, when I think of this. The saying is true. Life is indeed short, and 54 is not an age to bid goodbye to life.