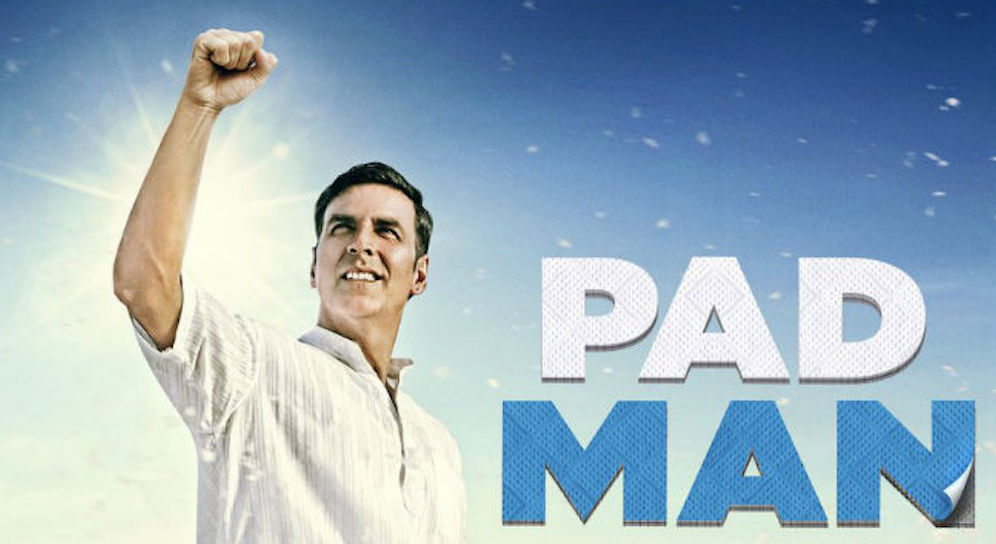 Movies Like #PadMan Are Making Menstruation An ‘Ordinary’ Topic, Not Hush-Hush

Movies like Padman and people like A. Murugananthan need to be commended for doing their bit to make menstruation just another ‘normal’ topic that can be discussed openly.

Last week, the trailer of the much awaited movie #PadMan was launched. Starring the dependable Akshay Kumar, the multi talented Radhika Apte and fashion queen Sonam Kapoor, this was the maiden venture of MrsFunnybones production run by author and actress Twinkle Khanna. Based of the real life story of menstrual man Arunachalam Muruganantham, this is his journey of becoming a social entrepreneur by manufacturing machines to generate low-cost sanitary napkins and motivating women to become financially independent through the machines. All this started because he wanted to make his wife’s life easy during those days of bleeding.

What makes this movie interesting and worth appreciation is that it is one of the rare films to openly talk about topics that are still hushed behind closed doors. Yes, women bleed every month, quite a lot of them suffer from severe cramps and indeed they use sanitary napkins or now even menstrual cups to keep themselves dry and comfortable. So why do we need to pretend like it doesn’t happen or worse still, that it is a matter of shame?

I must have been twelve years old when I got my first period. I had my second term exams going on. It had already been a difficult year for me with my mother far away in a hospital in a different city for close to four months. She had to undergo a surgery and couldn’t be moved till her injuries healed completely. Due to impending exams, I was not allowed to leave my home town to visit her. It was just Dad and me at home. Nobody had prepared me for the upcoming hormonal change. My mother didn’t get the time to talk to me about this while the school syllabus didn’t feel the need for any education related to adolescent body changes.

When I got up to submit my paper on that day, I felt sticky. Thinking it must be sweat, I walked out of the classroom only to be pulled aside by two helpful seniors. They guarded me front and back to take me to the girls’ compound lest any of the boys get to see me in that state. I was told that I had just grown up at that moment because I had started bleeding from my vagina and could produce babies now. Even vagina was a fairly new term then and who talks about babies to a twelve-year-old! They didn’t have any sanitary pad with them (I wouldn’t even know how to use it) , so all they could do was rotate the skirt with the stained portion in the front now and make me walk till the gate with my school bag dangling in the front in an awkward way in an attempt to hide the stains.

Reaching home, I was sure that I had contracted some critical disease and would die soon. Always being a little more attached to my father, I cried my heart out to him. He was perplexed. It was my mom’s responsibility to guide me in such a tender situation but she was miles away. So my Professor father patiently sat me down and explained to me what menstruation was all about and what was the use of sanitary pad. In that moment, he  had taught me the real meaning of what breaking gender stereotypes is. And he told me the biggest truth about periods – that it is just a body cycle that I should never be embarrassed about.

But what I was not prepared for was the cramps that were to be associated with it soon. Next month, the first day saw me making umpteen trips to the washroom, vomiting at intervals and screaming with pain. No pain-killer could help. The second day was equally bad. Suffering month on month, we visited the gynecologist soon after to see if there were any complications. I was educated on the large percentage of women suffering from severe menstrual cramps, also known as dysmenorrhea.

She said that it would get better with marriage and definitely after having kids. I was too young to comprehend that marriage meant sex here. My cramps got worse with time. Every month, I would miss school for two days if the date was on a weekday. I grew insanely jealous of my friends who had painless periods. The cycle went on till college and then my office. Since, it was crazy to even inform others of the real reason for skipping classes, I had instead become a creative excuse expert on those days of the month.

There were days when the pain was so bad that I couldn’t even get out of the bed while there would be an urgent meeting or  a deadline for submission. I had to call up my boss (not surprisingly, most of my bosses have been of the opposite gender) and inform them that I had a viral infection or migraine to excuse myself. You don’t talk about bleeding – that is not even a problem is what one of the Vice Presidents in an organization had told me when I had requested her for a half day leave due to severe cramps. As per the Guardian, “Up to 20% of women suffer from cramping severe enough to interfere with daily activities – and many grimace through it without ever speaking up”.

While I was living with my parents, it was mostly Mom and occasionally Dad who purchased sanitary napkins for us. Whisper was still not a big name. Those were the Stay and Carefree days. The ads on the television related to pads were hilarious. They took the word ‘blue blooded’ quite literally. It was as if menstruation was a crime, something to be ashamed of and women were deemed untouchable on those days.

Buying sanitary napkins was an equally scary process for a few. When I moved out of home for higher studies, it was the first time that I had to venture out on my own to buy sanitary napkins. Having grown up in a family where I was conditioned to believe that monthly bleeding is nothing but normal functioning of the body, I would confidently walk up to the medical shop nearest to my hostel and ask for pads, mostly with the detailed specifications like brand, pad size and wings. People around me in the shop were either amused or shocked, the female customers generally glared at me and the shopkeeper would either pretend not to hear or rush like a mad man to put the pack in a brown cover and then a black plastic packet. The layering gave one that feeling of purchasing something forbidden. Most of my hostel mates would be too embarrassed to buy pads on their own. By then, I had earned the reputation of being the fearless one. Taking advantage of the situation, I agreed to buy pads on their behalf in exchange for a free chocolate or an ice cream.

A few days back, I read about a company Culture Machine which came up with the concept of ‘First Day of Period Leave’. This means employees have the option to take leave on the first day of their period without any questions asked. There were people pro and against this move. Some felt it was regressive to even consider menstruation as some sort of sickness while some felt a move like this was regressive and against gender equality. But a lot of support came from working women who haven been sufferers themselves – they considered this to be a bold and progressive move. As someone who has cringed in pain through eight years of severe cramps in various organization, I can only hope that a lot of companies follow suit and acknowledge the fact that a majority of women indeed suffer from dysmenorrhea.

If this is how scary and regressive the situation is in urban India, I shudder to think of women in the rural part of the country. There are still a major set of women who use discarded clothes during periods. The same clothes are washed , dried and reused. Worse still, there are women who use leaves and cement bags. Chances of an infection are quite high in such cases. The steep pricing of sanitary napkins and the add-on taxes make them unaffordable for quite a lot of women. This is where the invention of A Muruganantham is important and relevant and his story that of a super hero. He not only speaks and delivers lectures on menstruation by normalizing the otherwise considered as a taboo topic but he has also achieved the unthinkable goal ,of making low-cost affordable sanitary napkins a reality empowering women to be financially independent through owning the machine in the process. And when stars with widespread reach like Akshay Kumar and Twinkle Khanna come together to deliver this social message through the medium of movies, there’s hope for change and a better life for women.

I hope someday very soon we can start talking about menstruation, cramps and pads with the same nonchalance that we display while discussing travel, movies and good-looking men. May the likes of companies like Culture Machine, men like A. Muruganantham and movies like PadMan shine on, creating a better future.