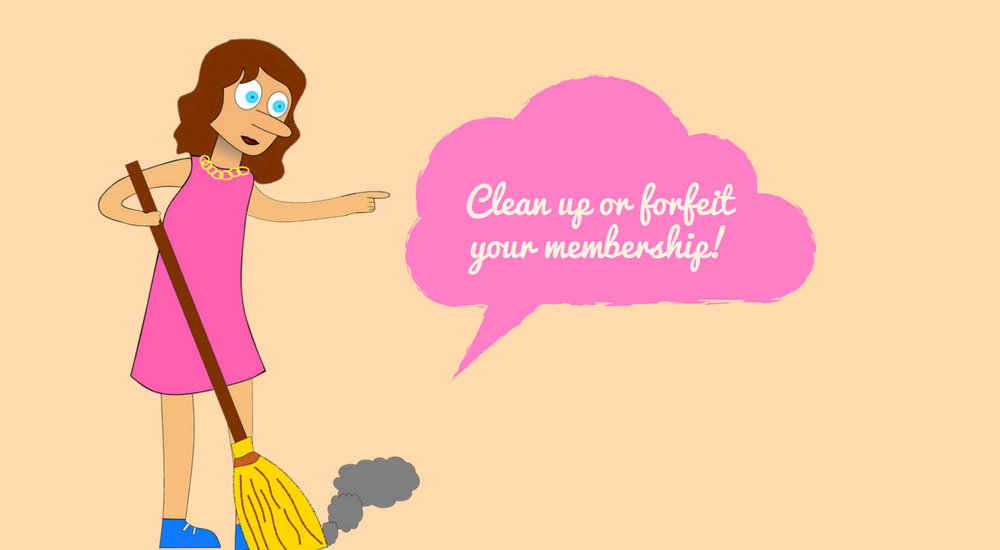 Welcome To The ‘Ladies’ Club: Have Your Broom Handy!

However hard you try to run away from the Patriarchy, it seems to catch up with you… sometimes, in the form of the landlady!

You crave to grow up when a patriarchal male figure, adorably called ‘baba’ decides that you are too young to go to a pub. You are freshly out of school and have begun to taste the little joys of adulthood, the stealthy drags of a cigarette, in the dead of the night. But you are still too young to go to a pub, even though your oldest friend from school might be performing on the open mic.

Being brought up in a conventional Indian household makes the transition from being a girl to a woman no less brilliant than the patient caterpillar’s long wait for wings.

It is wings, the patriarch said, that had attached themselves to the rebellious woman’s body, when she returned home at the midnight hour, the day she was forbidden to go the pub.

A day came, not long after, when she emerged out of her cocoon. She flew far away from home on her first flight. A new city was on the horizon, and here, she was an adult with a job, an apartment and, new found love. He was a fellow student from days gone by and the love was heady enough to keep both awake for hours at night. The days were busy, nights fleeting and there was hardly time for a little merry-making in the weekends after what seemed like ages of very hard work.

She had finally left the ‘law makers’ behind and established her own kingdom. Here, in the native colony, she was a lady. She was finally a grown up woman who earned money, went out of the gates with a certain poise, and came back exactly when she wished. She had used her agency, and her choices to build this life, and had vanquished patriarchy in the process. But all this was before she was introduced to the ‘Ladies’ club.

Enter landlady. A fat, fair skinned woman clad in a saree and plenty of jewellery. She lived in a flat two floors below us. We were unpretentious and naive, two young people trying to set up lives together. It wasn’t until the next weekend that I managed to go out shopping for basics, like the broom. While coming up the stairs weighed down by a couple of grocery bags, with the broom balanced precariously on my shoulders, I heard the ruthless voice lamenting with disgust that I had still not swept the house.

She made it her purpose in life, henceforth, to ask me every time I was going up or down if I had cleaned the place. The beginning of the month was her favourite when she could come up and scrutinize the corridor outside our door, and start afresh on her sermons.

The privileged male could always make fun of this, at my expense, and remind me mockingly of my ‘duties’. That was another of her favourite words. Her last conversation with us right before we left had also brought it up. It dwelt chiefly on the responsibilities that every member of the ‘Ladies’ club was obliged to shoulder. Her duties were primarily sweeping the floor at least twice a day, and making sure that “not a single noise trickled out of the door of her bedroom”.

The word ‘lady’ is usually associated with a sense of elegance, grace as well as femininity. She is a class apart from the petty woman in her position of power, and her agency of choice. Her choice of society defines her. In a country like ours, society does define the ladies. You might be addressed in the reverent “aap” that is usually reserved for the men. But you are still forced into complying with the existing gender roles. Feminine voices entrenched in patriarchy decree that a woman take up housework as part of her duty while men are exempted from the responsibility.

I was born in a house where I learned to fix the light bulb long before I learned cooking. It still reeked of patriarchy, at times. It is impossible to avoid the stench in the real world that I now live in. It is perhaps easy to label it using a word and avoid going into the painful and repetitive details of the kind of control it asserts. Control over what we say, do, wear, eat, or who we sleep with.

And, to think that there was a time when we actually thought growing up would be fair (not to be confused with ‘Fair & Lovely’).

Ankita Roy says she is an aspiring writer, with a flair for satire written from the ovaries.