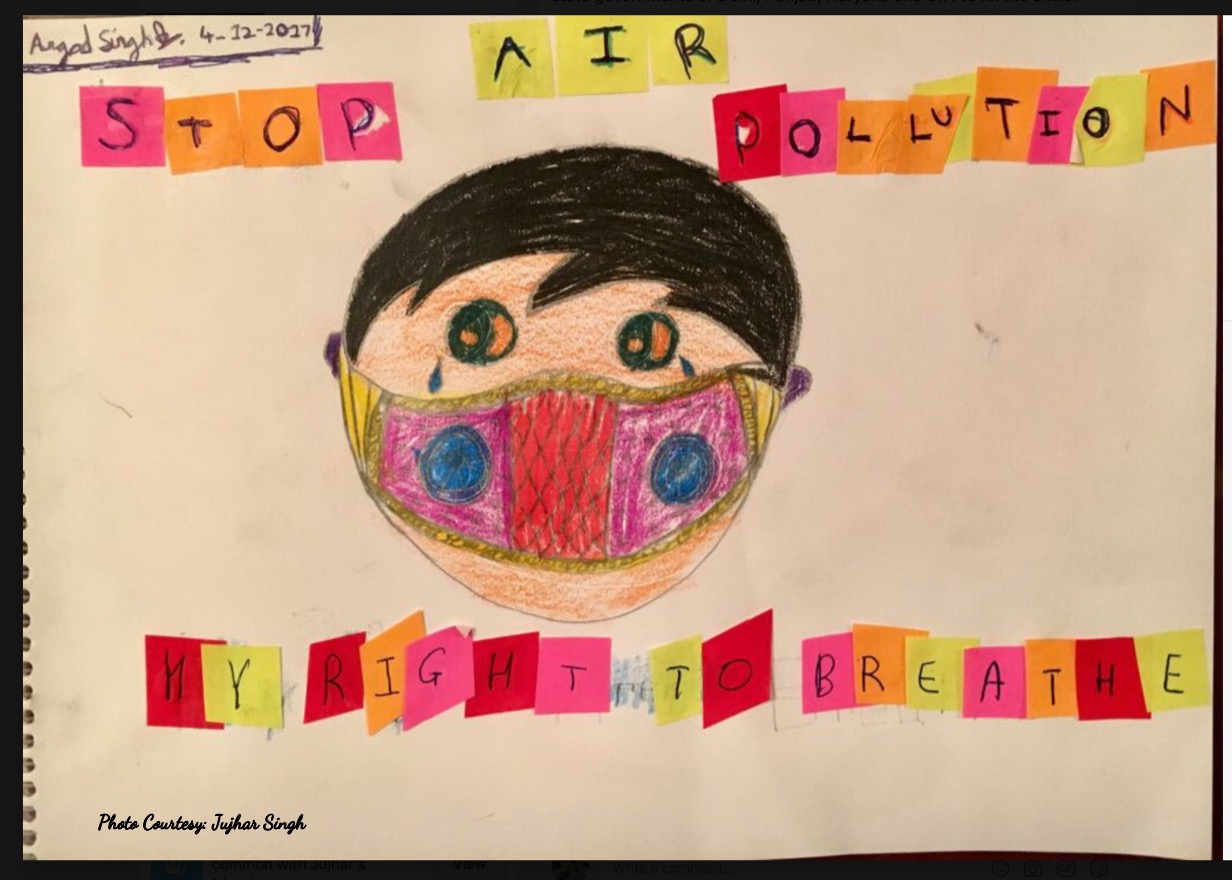 Pollution Vacation? What’s that? Exactly what we are gifting our children. Hear it ‘out of the mouths of babes’!

I was scrolling through my usual feed on social media when my fingers turned cold. It was not the words that friend and noted TV anchor Jujhar Singh had penned on a particular post…it was the picture attached that had left me numb.

His eight-year-old son Angad Singh had painted a boy choking under pollution, with eyes open wide behind a mask. I could shift neither my gaze nor my brain to anything else. Those helpless eyes from behind the mask were shooting at me a million questions….and each began with a why.

The painting spoke volumes of what Angad has been facing all this while. And so are the thousands of children in the National Capital Region, who have been either on a ‘forced vacation’ due to the hazardous pollution levels or have been trotting their way to school wearing masks amid the so-called ‘third attack of severe pollution’ this winter.

Angad’s painting took me back in recent time…when something else had jolted me. Perhaps in the run-of-the-mill, I missed making a point on paper. But better late than never…

In the first week of December, during a visit to the Pandey household in Delhi Cantt, Dhaula Kuan, my six-year-old nephew Daksh Pandey was telling me how different were his holidays in Bhopal from Delhi. Suddenly he asked me, “Maasi, why does Delhi have a ‘pollution vacation’? His three-year-old sister Urja overheard…fumbled, repeating his words…rolling her eyes…asking me what it meant. Daksh explained, “Baby, the same thing when your eyes were red and and we did not go to school.” I ask him who told him this. He said all the ‘big bhaiya’ (senior boys).

All this conversation was happening while their father, an army Major was out on official work and mother Ruchi was warming up our dinner. Daksh was asking me a million questions: Why this city was not like their previous halt where they could see the stars at night…where he was allowed to go the park even after 6pm…and where it felt “nice”.

Little Urja wants to know when she is she getting the next “pollution Vacation” so that she and I can go out on long-post-dinner walks like we did, when I used to visit them in Bhopal.

And I am lost in my own thoughts…what have we brought our kids to? Are we really adding a new category of holidays to our children’s school planners: A Pollution Vacation? Like, really?

And if so, what do we foresee? A monotonous voice promoting special packages for this kind of vacation? And where? To the mountains and the jungles? Really? Have we left behind any real jungles or mountains for our children?

Ruchi and I grew up in the hill town of Solan in Himachal Pradesh. Ruchi still visits the place since her parents stay there. But for me, it is yet another mountain-cut-town that now smells of urbanisation and its aftermath. And perhaps, that place too will announce “Pollution Vacations” in the years to come. (Though I say a secret prayer in my heart, that this logical assumption of mine never comes true.)

Pollution figures and news that kept buzzing recently, kept coming back to my mind. A thick blanket of yellow smog had enveloped the NCR, which again returned this month. The Environment Pollution Control Authority (EPCA) had imposed restrictions like shutting down of schools for a week. This was done since the pollution levels were under the ‘severe-plus’ or ’emergency’ category of the Graded Response Action Plan (GRAP). A very-poor GRAP is when PM2.5 levels are between 121-250 units and PM10 levels are between 351-430 units. Even movement of trucks in Delhi were halted and construction work was banned.

Just as I was sinking deep into my thoughts, I was shaken back to reality by tiny Urja who wants to go out with me to the park. Her mom is against it since pollution is at its peak. It is 7pm in the evening with people returning from work. I see Urja’s drooping face and pray that the government really does something about it.

But, Government? Well, the government in itself is a big question mark here in NCR. Half of it goes right, while the other half pulls it to the left….and stuck in between are we…and our children.

But is blaming the government enough? What the hell are we doing at our level: asks my conscience. The Supreme Court’s order not to burst crackers went up in the smoke that we generated as a city.

While chemists are minting money selling masks, the air-purifier sale is at its peak this season. Yes, this is what we are doing. Sitting and providing a shock to the lungs of our children who will go out from pure air at home to the worst quality air outside. This is what we are doing, without doing any logical thinking. And we call ourselves — educated?

I know many people will say “my effort alone won’t make a difference”. But then millions of drops form the ocean. And this ocean will be our future generation’s pool to swim in a clean environment.

So what we need to do? Well, a little discomfort now could bring some comfort to our next generation.

a) Why not increase our walks beyond the park to nearby grocery stores or supermarkets instead of using a vehicle?

b) Why drive to work alone? Carry a colleague. Carpool.

c) Why not be wise in using the air conditioning at home, car or at the gym? We grew up facing hot afternoons. I agree the temperature we faced was approx 5 -8 degrees less than what our children face outside. But then, do we really switch on the AC post that bearable temperature only? Think… the same applies to us at the gym. Don’t roll those eyes at me, read, do some research about the kind of poisonous gases an AC releases in the environs and then only you squirm, OK!

d) Plastics when recycled also release harmful gases into the air, so just the sign of ‘recycle’ isn’t enough. Carry a bag from home to bring back your shopping booty. Generate less waste since all this IS simply polluting the environment further and further with each passing minute.

e) Celebrate birthdays, anniversaries and all the memorable moments not by lighting a candle but planting trees. And yes, no longer is a single sapling enough. We have left that far behind amid the smoke generated by our vehicles daily. More and more…and a lot more have to be planted each week.

f) Last but not the least, do not stop here. Give me ideas on how we can make our city better and healthier for our children. Will you post them in the comments column?

Does all the above ‘gyaan’ sound familiar? So clearly you have read it or heard it before to ignore? And continue to curse the government…and simply go hunting Google which air-purifier to buy. Right? Sad!

If an Angad’s soul-numbing painting and a Daksh’s piercing questions didn’t jolt you enough to follow the above and beyond….then all I can say is may God be with you and your children for the next and the next…and perhaps more…POLLUTION VACATIONS!

And for those of you, who have some mercy left in their hearts for their own children…PLEASE pay heed. One step forward is the start of a positive revolution! And I have made up my mind.

(Image is Angad’s painting of a boy reeling under pollution; used with permission from Jujhar Singh)

Do Women Wear Makeup As A Kind Of Social Mask To Hide Their True Selves?